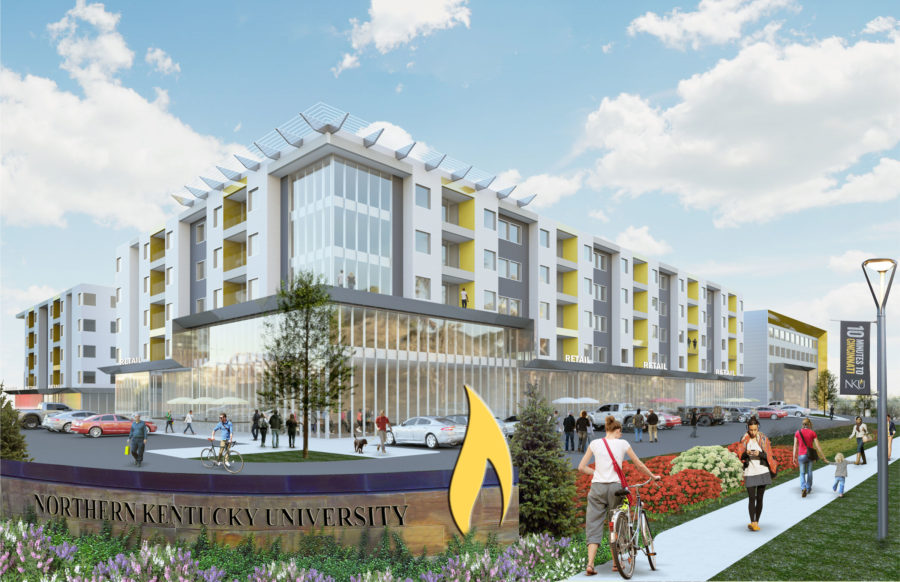 A 12-acre mixed-use project that will include additional on-campus housing is in the beginning phases of planning. The plan is still far-off, but the university hopes that it will connect the campus with the surrounding community.

A 12-acre mixed-use project that will include additional on-campus housing is in the beginning phases of planning, according to a NKU release. The university hopes that the plan will improve relations between the campus community and the surrounding city.

NKU has selected American Campus to Communities and Fairmount Properties to work with the university on this plan, which was announced September 13.

“Restaurants, perhaps retail, office space…it could be anything that fits into a mixed-use project,” Schuh said.

The site will be at the intersection of Nunn Drive and US-27, the main entrance of campus.

“In the university master plan the site has long been considered the transition zone between the campus and the city,” Schuh said.“That was the area that we felt like would really improve the campus.”

The goal of the project isn’t just to improve campus itself but to improve the relationship between NKU and the rest of the community. Schuh explained that Fairmont Properties proposed to include locally- owned businesses in the project.

“They want to create a transition zone where people can meet for social activities – whether it be restaurants or various kinds of retail enterprises, generate some tax revenue for the city, generate some energy and activity around the campus and the community — to energize this area as a place where people want to be and want to hang out,” Schuh said.

Some students are pleased with NKU’s decision to expand further.

Mallory Eilerman, a sophomore double major in psychology and sociology, would like to see NKU continue to grow.

“I’m excited. I want NKU to expand and be more known. I feel like expansion just adds more respect to the school,” Eilerman said. “I will probably have more things to do when I’m waiting around for classes or events, too.”

Marc McCarty, a senior computer science and philosophy major, believes he would spend more time and money if there were more things to do on campus.

“If I was here [on campus], on a break, I’d buy something. I wouldn’t spend any more time, but I would spend more money,” McCarty said. “ I wouldn’t come to campus unless I had to, but I think this is a good idea.”

Other students are excited about the new on-campus housing plans. Along with restoring, renewing, renovating, or replacing existing residence halls, NKU would like to create more space for on-campus housing as well.

“I have a friend who needed to get into the dorms last year and housing had no rooms available so she ended up having to transfer schools because she had no way to commute two hours for classes,” Ulrich said.

“I’m a tour guide, so I’ve been in all the dorms on campus. I live in the University Suites now and have lived in Woodcrest [last year], and I can tell you that some of the rooms really need some updating,” Ulrich said.

Amanda Nageleisen, director of Public Relations, said increasing housing is going to be a very important part of this project.

Not much is known yet about what is in store for the entrance of campus, but planning is in the works.

“The project is still being finalized,” Nageleisen said. “The details haven’t been worked out yet. The next step of the process in the next couple of weeks and possibly months is the university will work with the companies to develop an agreement.

“We will be asking American Campus to Communities and Fairmount Properties how they plan to pay for this and what exactly could be on the site.”

American Campus to Communities is the nation’s largest developer, owner, and manager of high-quality student housing communities, and Fairmount Properties is a specialist in mixed-use developments on and adjacent to university campuses, according to a release.

Both developers have not yet made comments about the plans for the future of the project.