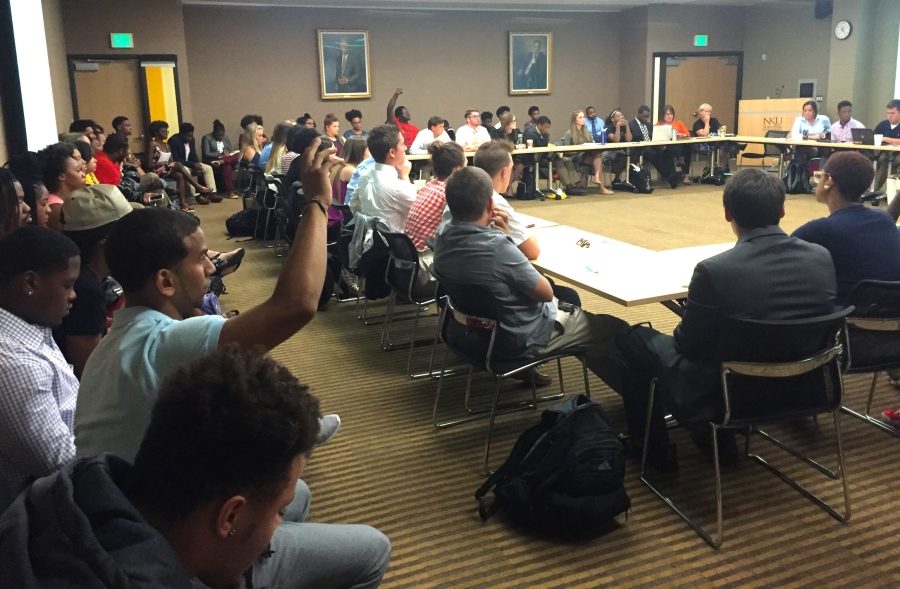 Guests filled the room of SGA's meeting on September 19. Issues of racial and cultural diversity, as well as inclusion, were discussed.

The Student Government Association meeting Monday addressed issues facing students of racially and culturally diverse backgrounds, along with how to make campus a more inclusive place.

During the meeting, SGA created a committee of both students and senators, to plan both a town hall as well as a new event coined NKU Unity. The purpose of the two events is to bring to light the issues faced by minority groups on campus.

President Will Weber put emphasis on ensuring that the committee is a diverse pool, and the motion for the committee passed unanimously.

Approximately 31 guests from minority racial and cultural groups on campus attended the Sept. 19 SGA meeting to express the under representation of minorities that they feel exists on campus.

In an attempt to meet that need, motions were on table to make a town hall meeting dedicated to the discussion of racial and cultural diversity as well as inclusion. A new event coined NKU Unity was also brought forth.

It was brought to question if there should be a town hall and the NKU Unity event, or one or the other.

“This is a fight that needs to be fought from every end,” James Johnson, a meeting attendee, said. “I believe that this could be a successful event. I do not want this to be the one thing to happen and then nothing else happen after that.”

The idea of NKU Unity, presented by SGA student rights chair Emma Vincent, is meant to bring together organizations and offices from across campus.

NKU Unity, according to Vincent, was made in order to amass a larger audience to hear and acknowledge the issues groups and individuals across campus face.

To counter this, meeting attendee and former SGA member, Donald Taylor, said inclusion of all members of the student body wouldn’t be reached by a singular event.

According to Taylor, in the past when issues directly impacted a passionate community of students, the town hall amassed a large crowd.

“SGA cannot tell us what our problems are or aren’t,” Taylor said. “We can’t be considered inclusive from one event.”

SGA President Will Weber said he and his organization care about the issues minority groups are facing on campus, and he will not let them get swept under the rug.

Considering the large turnout of racial and cultural minorities, Weber said that the needs of those in attendance won’t necessarily be met by a town hall discussion alone.

Several guests in the audience showed concern over ensuring that minority voices are included in the planning and implementation of the events discussed, town hall and NKU Unity, as well as future events.

The issues of racial and cultural minorities feeling excluded from the majority on campus are often avoided, according to meeting attendee Matthew White.

With this reason, he said that the guests in attendance would like to have both the town hall and NKU Unity.

Kathleen Roberts, senior adviser for inclusive excellence, was also in attendance. Currently, the campus is creating a new inclusive excellence plan. Seventy faculty and staff members have expressed interest in serving on subcommittees to this plan, as well as 80 students.