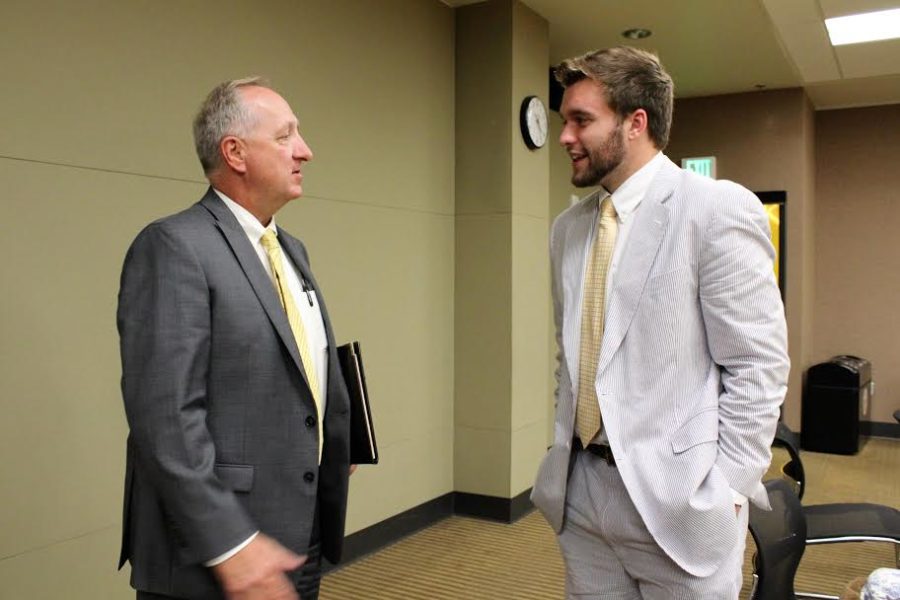 Dr. Daniel Nadler chats with SGA President Will Weber after the Aug. 22 meeting. Nadler was hired by Northern Kentucky University as the new Vice President of Student Affairs in May.

He was a fresh face, confident and polite as he introduced himself at the first Student Government Association meeting.

As the meeting drew to a close, Dr. Daniel Nadler waded through the crowd of students, listening to their ideas and aspirations with a smile.

Nadler was named the new vice president for Student Affairs in May, replacing Kim Turner, who was the interim vice president for student affairs. Turner assumed the position April 1, 2015, after the resignation of Dr. Peter Gitau on March 16, 2015.

As the leader of student engagement at Northern Kentucky University, Nadler has already been interacting with student organizations, and he hopes to connect to with as many students as he can while serving the university.

Nadler began working at the university on July 18 and has a long history of working in student engagement.

“Dan has dedicated his career to teaching, research, and service. For more than 30 years, he has worked to build a rich and engaging experience for students at both public and private institutions,” President Geoffrey S. Mearns said in a news release. “He brings an impressive depth of experience to our campus that will strengthen our student support and retention efforts.”

Nadler will provide direct leadership over a variety of NKU departments, including those within Student Conduct and Engagement and Student Inclusiveness.

Nadler said he is also working closely with campus police since accepting his position.In particular, Nadler has worked closely with the Interim Police Chief, John Gaffin. Nadler hopes that NKU will one day be the safest college campus in the country.

In a campus-wide email, President Geoffrey Mearns announced on July 27 that the University Police Department will move from the Administration and Finance division to Student Affairs, the department Nadler heads.

RELATED: How the University Police Department is changing

Mearns said in the email that Nadler has several decades of experience in working with university law enforcement, and he expects the transition to be smooth.

Mearns said the change was prompted by other universities across the country assuming a law enforcement platform that is more centered on student life.

Nadler said the University Police Department will be working to enhance their community policing, while practicing a student-centered approach.  “There is a good foundation in place with terrific, highly talented and dedicated police officers,” Nadler said. “We will be implementing additional police officers training, including sessions on diversity and inclusion.  We will be launching a national search in the near future to hire a Police Chief, and three students have been identified to serve on the search committee.”

To add to his experience working in higher education, Nadler said he taught Higher Education Administration at the graduate level while he was working at Eastern Illinois University.

“I think it’s helped me keep a perspective on what’s happening in the classroom — how students are feeling about their academic experience and how student affairs can help create an even richer educational experience for students,” Nadler said.

Nadler also has experience outside the classroom. According to Kim Vance, director for Fraternity and Sorority Life, Nadler was a member of Phi Sigma Kappa Fraternity as a college student.

“He was IFC (Interfraternity Council) President, so he gets that piece of working with the entire fraternity community,” Vance said. “And then throughout his professional career, if you go back and look at it, he’s had a lot of interaction with fraternity and sorority life…he’s had some different experiences that I think will help him understand what we are trying to do here as a fraternity and sorority committee.”

Overall, Nadler said the most important aspect of his position is the students and their experience.

“Academic and student affairs working together creates a very powerful experience for students. It takes both,” Nadler said. “Student affairs staff play a very meaningful role in the educational process, and it may not always be in the classroom, but helping to do things outside the classroom that help really contribute to a student’s learning and development as well.”