5 things you missed at Fall Convocation 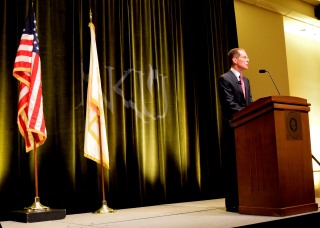 Mearns addressed the NKU community before the start of the new fall semester. The convocation speech took place on Aug. 19.

For those of you who couldn’t hear President Geoffrey Mearns’s Fall Convocation address on Aug. 19, don’t fret. The Northerner has you covered with the five most essential topics that were discussed.

These range from rising ACT scores among the incoming freshman class, struggles with state funding and budget cuts, the transition to Division I athletics, the continuing stride for inclusive excellence and the 10th anniversary of the College of Informatics.

ACT scores on the rise

These numbers are the highest in the university’s history, according to Mearns’s speech. This year’s incoming freshmen class includes over 2,000 students with 82 being international students.

This rise comes despite a statewide decline in the number of students graduating from high school.

As the state and nation begin to see decreases, Mearns encouraged the NKU community to invest more time and resources into recruiting and retaining students.

As Mearns cited, in a report released by the Center for Budget and Policy Priorities, Kentucky has cut funding by 32 percent since 2008 for higher education.

In consequence, since 2009, NKU has lost $7 million in annual state support. The NKU community has also been hit by increases in the cost of pension contributions, Mearns said. These costs went from less than $4 million in 2010 to $18 million in 2016.

Though the combined factors equal out to be a 10 percent loss in the university’s annual budget, Mearns encouraged the NKU community to remain hopeful for what’s ahead.

“Notwithstanding these extraordinary challenges, our university continues to succeed,” Mearns said.  “Indeed, we continue to excel.”

In the wake of statewide budget cuts, Mearns took the stage in the January convocation and asked the NKU community to reach out to Kentucky’s elected officials.

Coming full circle, since Mearns’s last convocation speech over 4,300 messages were sent to the General Assembly and Governor Matt Bevin. Mearns called it the most aggressive advocacy campaign to date for the university.

The general assembly has agreed to increase state appropriation by upwards of $5 million next year as well as committing to adopting outcomes-based funding to benefit universities such as NKU.

“When we work together for a common cause, and when we pursue our ambitions tenaciously, we can achieve our goals,” Mearns said.

Investing in student athletes: a move to Division I

Navigating these challenges while still allowing the university to prosper comes down to sticking to a strategic plan that was set forth three years ago, according to Mearns.

Though Mearns noted that patience and determination are required to see the end results of this plan, many goals have already been met. These goals include the recent transition to Division I Sports.

In a four-year reclassification process, NKU sports have officially moved to Division I, meaning that student athletes will now have the opportunity to play in national championships.

In addition to the move, the average GPA of student athletes were the highest in the history of NKU athletics, ringing in at 3.24.

Diversity, Inclusivity continue to be a priority

Since 2011, based on projected data for the fall, Mearns noted that the retention rates for minority students have increased by 13 percent since 2011.

“Those numbers are important,” Mearns said. “But to be truly inclusive, we must expand diversity to include gender, religion, culture, sexuality, geography, socio-economic status and political and philosophical beliefs.”

The 2016 school year marks the third year since the opening of LGBTQ Programs and Services. It marks the second that the university began to offer faculty and staff with domestic partners the same benefits available to employee’s spouses.

College of Informatics celebrates an anniversary

The College of Informatics made its way to campus ten years ago. In this time frame, the college has awarded over 27,000 degrees.

Since the college was created, NKU has seen increases in enrollment along with a growth in degrees, according to Mearns.

Mearns pointed to several awards and honors bestowed upon the college, including being designated a National Center for Academic Excellence in Cyber Defence by the National Security Agency and the Department of Homeland Security.

The investments in the College of Informatics demonstrated how the university is planning on investing in the growth of other colleges as well, including the up and coming Health Innovation Center set to open in the summer of 2018.

Mearns closed the speech with a call for faculty and staff to reflect on their ability and position to inspire and impact the thousands of students that will make their way to campus when classes commence on Aug. 22.

“It was an impactful speech,” SGA President Will Weber said.  “It really inspires us to see what the vision is going forward and to get excited to go back to school. I’m excited to see everything that’s going on across campus and how amazing the students are. Not only what they’re doing here, but where they’ll go after they graduate.”