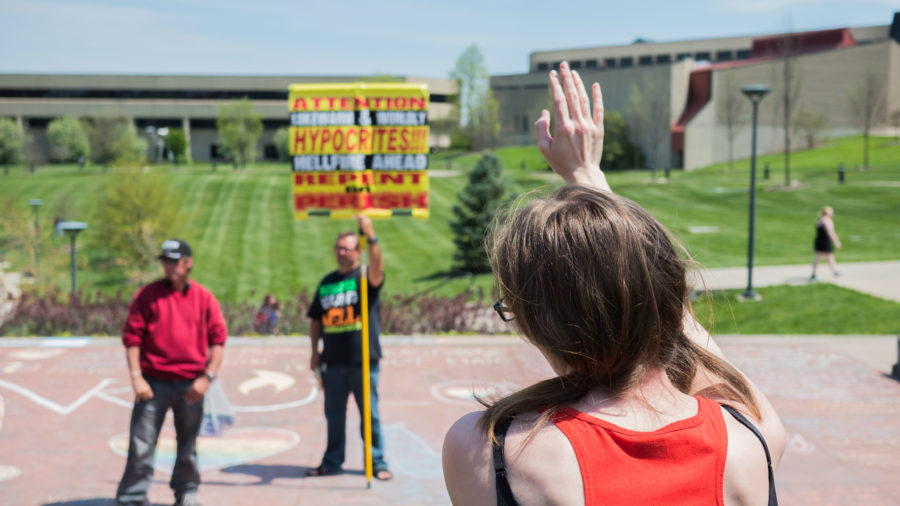 Several students sat in the amphitheater throughout the day viewing and arguing with the street protestors. Other organizations attempted to draw the crowd away from the pair, citing the protest as creating a negative atmosphere.

Two preachers stirred up controversy on NKU’s campus on April 20, condemning the sinful lifestyles of the student body.

John Williams, one of the preachers, carried signs warning against divine judgment and wore a t-shirt condemning “homo sex” as sinful.

The preachers were stationed in the amphitheater overlooking Loch Norse, between the University Center and the School of the Arts.

In the other amphitheater between the School of the Arts and the Steely library, the Office of LGBTQ Programs and Services worked with Common Ground as well as Vine and Branches, a local campus ministry, to provide a “safe space” for students to avoid the preachers and enjoy free coffee.

Official Street Preachers, according to Williams, is a national network of over a hundred churches that works with Open Air Outreach, an organization that has brought speakers with a similar message to NKU’s campus.

Students sat near the preachers, some debating, some observing and others mocking. Campus Police stood near the edge of the amphitheater to maintain order and ensure no one’s first amendment rights were infringed on.

President Geoffrey Mearns made an appearance and shook hands with many of the students watching the preachers.

“It’s a first amendment freedom of speech exchange,” said Kachurek. “I’m not sure what their objective is…nor am I really sure what the objective of the audience is.”

Kachurek outlined the standard procedure for when members of Official Street Preachers or similar organizations come to NKU’s campus.

Official Street Preachers plan annual gatherings of 10 to 20 speakers on NKU’s campus every September, according to Williams.

According to Williams, they were intentionally visiting NKU in concurrence with “4/20”, a popular day for recreational marijuana use.

Williams attributed the mostly negative response to his preaching to students being reluctant to accept his version of Christianity, repent their sins and change themselves.

“The world doesn’t like the light of Christ because the bible says that their deeds are evil,” Williams said, “So it makes sense when you shed light on a dark situation that people that are living in darkness will flee from the light.”

Organizations like Official Street Preachers and Open Air Outreach are often thought to intentionally bait people into violence or other actions that could lead to lawsuits.

Williams said that this belief stems from most Christian churches teaching a doctrine contrary to true biblical dogma.

“When we say things like ‘God’s love is conditional’ or ‘God’s mercy is always conditional, he said that unless you repent you will perish’, people don’t like to hear that,” Williams said, “because people hear from most religions and most denominations of Christianity that God loves you, God accepts you the way you are, he forgives you, but that’s clearly not the message that Jesus preached, he preached that his forgiveness is conditional.”

Renee Jennings, the incoming pastor for Vine and Branches, disagreed with the version of Christianity being preached by the demonstrators.

“The group that’s been coming on campus and kind of preaching this message of hate and intolerance. We’re not about that,” said Jennings, “We believe in a god that is loving and that is grace-filled and we’re here just to kind of convey that message.”

Vine and Branches has hosted several events that provide free coffee to NKU students, staff and faculty. They provided the coffee for the safe space. Students organized a similar event in the fall 2015 semester when the preachers visited NKU.

Rae Loftis, coordinator for the Office of LGBTQ Programs and Services, said that they immediately reached out to those involved with last semester’s event when they heard that the preachers would be returning.

“I really value this about the students that did this last semester as well and wanted to do it this semester” said Loftis. “It was a really good idea to set up a space where people could still be outside and didn’t have to be around the messages that are being shared from the protesters.”

“It’s a beautiful campus and, unfortunately I think where the protesters are, they have sort of the heart of campus.” Loftis said, “Especially on really lovely days like this people want to be outside and want to be able enjoy the sunshine, but I don’t know if you can enjoy being outside and hearing the kinds of things that are happening over there.”

According to Loftis, the preachers contacted NKU campus police, who informed the division of student affairs, who then informed the LGBTQ Programs and Services department, who contacted the other groups involved.

Loftis acknowledged the preacher’s right to be on campus, but believed that the student coalition was more reflective of NKU’s values.

“I do understand freedom of speech and I understand, I get that part,” Loftis said. “I don’t think NKU stands for what this person says. I think that to have a space for them to come and for them to be able to speak is us acknowledging and respecting that in other people. I don’t think it has anything to do with the way or the things that NKU believes as a university or as a community. I think that this space is more reflective of who NKU is.”

Despite the coalition’s efforts to draw students away from the preachers, many chose to argue through the heat of the afternoon.

Ashley Hall, a freshman studying psychology, had been there almost since the preachers started speaking.

“I heard about [the preachers] last semester. They came down here and they were hateful about everything,” said Hall. “It was just aggravating me to see people treated like that for no reason.”

Throughout the afternoon, members from Vine and Branches, Common Ground and LBGTQ services went to students viewing the preacher and encouraged them to visit their safe space instead.

Chief Kachurek said that those offended by the language the preacher’s used should take note of the response the preachers elicit.

“If they didn’t have an audience, they wouldn’t be here,” Kachurek said.