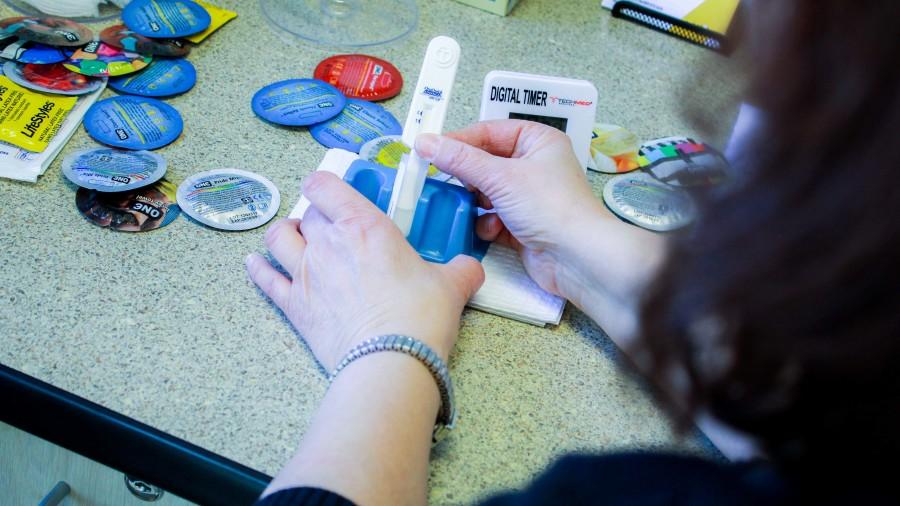 Campus nurse Michele Kay prepares the HIV test before administering it to a student. The test is free of charge and is offered through NKU.

Having to tell a student that they are possibly HIV positive is a life-changing responsibility that campus nurse Michele Kay doesn’t take lightly.

She can still remember the first time she delivered the news.

“My first positive has always stuck with me,” Kay said. “I can remember the student’s face. I remember their reaction and certainly it changed me because I remember that look on their face and how this would change their life a lot more than it will mine.

“This is a game changer,” Kay reiterated.

NKU’s Health Counselling and Student Wellness Center offers HIV testing to students, faculty and staff. Although the test is free, it is a service that is rarely utilized by students.

The test isn’t invasive and consists of a mouth swab that the students do themselves.

The rapid HIV test  detects any HIV antibodies. It is a screening test, and those who test positive aren’t considered to be HIV positive until a confirmation test is performed. NKU does not offer the confirmation test, according to Kay.

Kay, who has worked at NKU for 20 years, is the only campus nurse trained to administer the tests. She has been authorized to provide the tests since 2008.

The state health department had previously visited campus to provide women’s services like pap smears, birth control and STI testing for free. However, according to Kay, the state lost its funding and NKU was one of the universities that had to cut those services.

The health department then sponsored Kay for training in order to fill one of the gaps left by the budget cuts.

Kay said that her close relationship with the health department has proved beneficial for any student that has a positive result on the screening test. .

“In the past, when I have had positives, they have come up and provided confirmation tests so that the student can remain as comfortable as possible,” Kay said. “The health department would then get the student in contact with a case manager that can help with doctor’s office visits and assist with the financial aspect.”

The students get their results the same day, so Kay takes as many possible measures to make sure the students are able to cope with their results, like directing students to the counselling center down the hall.

On average, Kay explained that she gets two students a week for testing.

“There have been weeks that I have had two a day for everyday for the week and weeks where no one comes in,” Kay said. “Right now we mostly rely on word of mouth. The students are our best form of advertising.”

Besides students convincing their friends to take the test, Kay said that they advertise through the Student Union.They also promote HIV testing when they do women’s health exams.

“It is beneficial for students who want to get tested in a secure environment,” Sumra said. “Anything that helps people become educated in a more in-depth manner seems like a positive for the university.”

In an attempt to showcase the importance of public education on STI’s, Kay has talked to students in every University 101 course. In addition to these, the center works in conjunction with programs like Breaking Ground and African American Services by distributing HIV tests to the group members.

Because those with HIV rarely show symptoms, being diagnosed is essential to their health, according to Kay.

“A lot of people don’t know that they are HIV positive,” Kay said. “In fact, statistically from the Center for Disease Control one in eight people who are HIV positive don’t know. I think that the importance in this population is that most students are sexually active, they put themselves at risks, which I witness everyday.”

“There should be more announcements and programs on STI’s,” Stortz said. “It’s good that the university provides these services, but if no one knows about it then it defeats the purpose.”

Kay wants students to know that it is important to be proactive if they are considering whether or not they should be tested.

“Students may feel that that wouldn’t happen to them, but it does,” Kay said.

To make an appointment for the test, a student needs to contact the center and request to see Kay. The office requests two forms of identification- a student’s name and phone number.