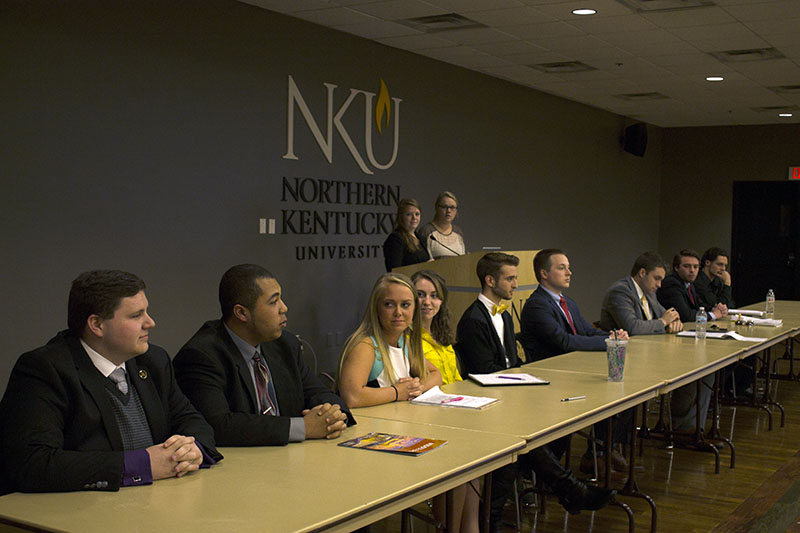 Presidential and vice presidential candidates addressed student concerns at the annual presidential debate on March 29. Students can vote March 30 and 31.

The prevailing topics of the Student Government Association presidential debate were retention rates among minority students and the alleged underfunding of minority organizations such as fraternities and sororities under the National Pan-Hellenic Council.

The debate, which was held on March 29 in the University Center Ballroom, welcomed all of the presidential and vice presidential candidates to speak on their platform points and address student concerns.

During the two-hour debate, minority students questioned the levels of representation among student organizations.

When student Matthew White asked candidates about what they knew about NPHC organizations, multiple candidates failed to list what groups were present on campus, demonstrating a lack of awareness of NKU’s minority communities.

Presidential candidate Devin Mason addressed White’s question about the lack of recognition of minority-based organizations by calling for equal treatment among these groups.

“We need to give [NPHC] more opportunity to reach the student body,” Mason said. “You are not given the opportunity to promote yourself. This is going to sound bad, but just because you are black, people believe that you should address all your questions to Tracy Stokes [Director of African American Programs & Services], but you should address them to Tiffany Mayse [Director of Student Engagement], because you are a part of an organization just like anybody else.”

Presidential candidate Brad Blankenship also spoke about this issue and suggested that SGA should begin hosting more events that would allow them to engage with a wider variety of students.

“I know that currently SGA isn’t event-based, but we can have events that can break down barriers between different groups of people and promote diversity and organizations that are on the outside fringe of Greek life,” Blankenship said.

Hunter Poindexter, a presidential candidate, proposed that SGA promote the International Student Union by sending a liaison to their meetings to hear out their concerns.

“We need to be there,” Poindexter said. “We need to promote ISU to the entire student population. Let student government, which is a little bit bigger of an organization, help you all grow and find success.”

“If you have a dying organization that nobody knows about, it becomes harder to solve the problem,” Weber said. “I think bridging the gap to address the ethnocentrism in our community helps build an inclusive campus.”

Current SGA president and presidential candidate Katherine Hahnel believes that these programs need all the support they can get.

The elections for SGA will be held on March 30 and 31. Students can vote online at http://sga.nku.edu/elections.html. Elections results will be revealed March 31 at 10:15 p.m.