Safety Walk brings together perspectives from across campus 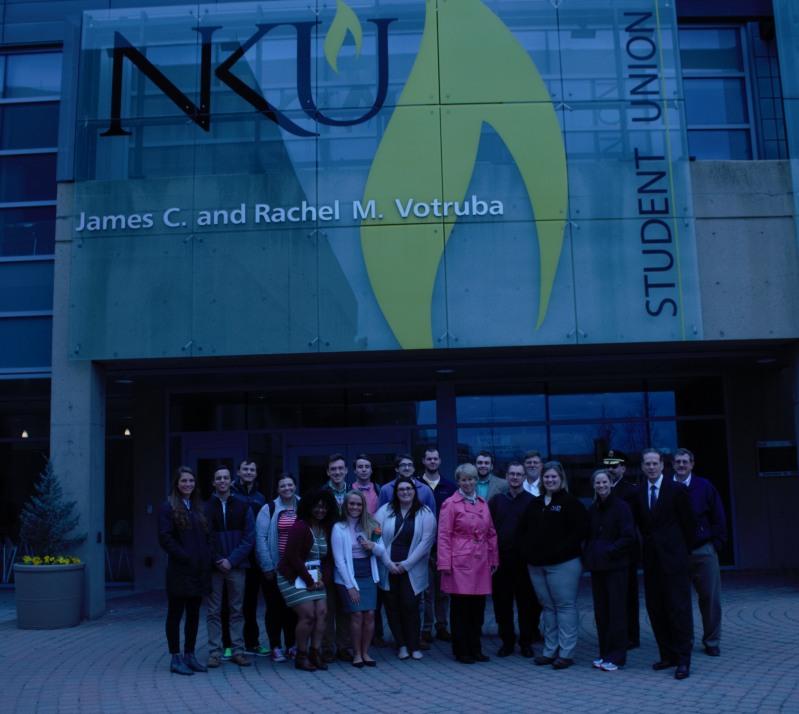 The safety walk was coordinated by the Student Government Association. Those pictured went on the main campus tour.

The lack of security cameras around parking garages, updating signs around campus and on buildings as well as possibilities to beautify campus were among the concerns brought up at the annual safety walk.

The safety walk took place at 5:30 p.m. on March 28 and was split into three different groups, each made up of students, faculty and staff as well as members of the Student Government Association.

In the tour of main campus, attendees included President Mearns, Police Chief Les Kachurek and several faculty members from departments across campus along with several SGA senators, SGA Vice President Will Weber and others interested in lending their voices to the improvement of campus life.

Each group covered a different section on campus, which included the main campus area, the residential villages and the Callahan residential area.

For the Student Government Association, the walk is a way to allow voices to be freely heard and addressed, according to Kaitlyn Schaeffer, the committee chairman of University Improvements and a sophomore marketing major.

“Everyone can hear each other out, even big-ups like President Mearns can come out and can hear what the students are saying,” Schaffer said, adding that the walk allows a myriad of issues to be brought up, ranging from campus safety to the implementation of Norse pride on campus to ways to make NKU more aesthetically pleasing.

“It’s very important to us to understand the campus through the eyes of the students,” Mearns said. “This gives us a regular opportunity to view the campus from a different perspective then how some of us see it.”

According to Mearns, the annual walk has been a staple event for years, citing that the safety walks were happening before his arrival as president on campus.

Mearns added that the walk allows fresh insight, adding that while he usually sees the campus south side walking from the north the walk sheds light on areas of campus he may not normally see.

“It also enables us to be responsive to the interests, passions and concerns of the students,” Mearns said. “We’re able to be face-to-face and on the grounds to discuss these different issues.”

Barbara Jo Narwold, a NKU alum who works as a testing coordinator, saw the walk as a way to connect faculty members to students.

“It gives perspective on what’s going on and what issues need to be addressed from not only a student’s perspective, but from a faculty and staff perspective as well,” Narwold said.

The tour also garnered interest around bringing more Norse spirit to campus by ‘Norsifing’ certain places, such as the area in front of the science center and decorating the campus sidewalk with Norse colors and symbols.

“Essentially, student government does safety walks so that students, faculty and staff are all able to get together to make campus safer, more beautiful and more norsified,” Schaffer said.