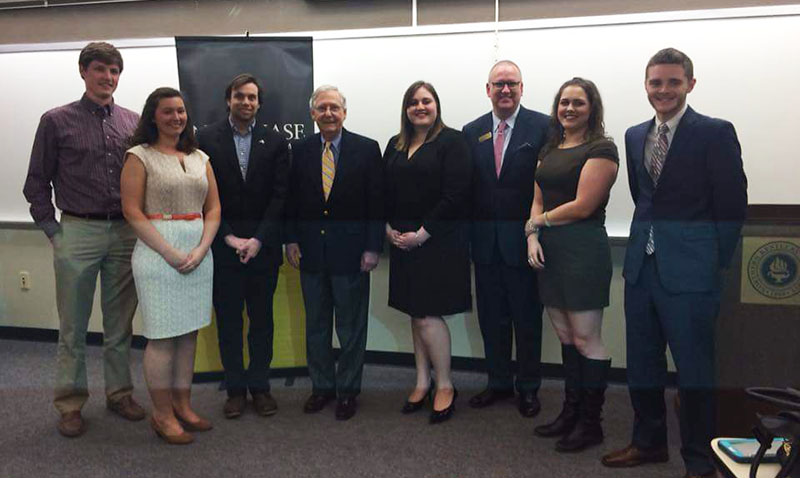 The NKU Chase Federalist Society with Sen. Mitch McConnell after his talk on campus on March 24.

Sen. Mitch McConnell addressed his controversial move to delay the next Supreme Court nomination and also weighed in on the national opioid epidemic when he visited NKU’s campus on March 24 to speak with the NKU Chase Federalist Society.

With the passing of Justice Scalia, the Supreme Court has only eight justices presiding; however, Sen. McConnell has adamantly refused to consider a replacement nominee until after the next president takes office.

McConnell took the opportunity to justify his stance that the debate over judicial confirmation should be about “‘Who should make the appointment?’ rather than ‘Who is it?’”

“I knew that if the shoe was on the other foot — in other words, if this was a Republican president making this nomination and this was a Democratic Senate reacting to it — they wouldn’t fill the vacancy… and I knew, we wouldn’t either. So what I decided, and recommended to my Republican colleagues, is rather than have this debate be about a particular individual…. I think we’re better off to make this argument about the principle.”

Additionally, the senator observed that confirming a nomination during an election year has not happened for 80 years, and that the most recent confirmation between a presidency and a Senate controlled by opposing parties was in 1888.

Sen. McConnell went on to claim some Democrats had at certain points held sentiments similar to his own.

“Vice President Joe Biden, chairman of the Judiciary Committee in 1992, a presidential election year, said, ‘If a vacancy had occurred, we wouldn’t confirm it in the middle of an election year,’” McConnell said. “And if that wasn’t enough: my [Senate Democratic] counterpart, Harry Reid, said, ‘The President of course can nominate, but we don’t have to vote.

“And if that wasn’t enough, the next Democratic leader Chuck Schumer said, 18 months before the end of Bush 43’s tenure, they wouldn’t fill it in. I rest my case.”

He also explained that he is confident the Supreme Court can maintain functionality with eight justices.

“Does [delaying the nomination] make the Supreme Court inoperative? No. Both Justice Breyer and Justice Alito said within the last month they’d be fine. There may be a handful of cases that end up in a tie. But frequently you end up with an even number,” McConnell said.

McConnell said there have been several cases that have been decided with an even number of justices, mentioning in particular the large number of cases decided while Elena Kagan and Anthony Kennedy recused themselves.

“So we’re not shutting the Supreme Court down. We’re simply saying that we’re not going to have this nominee dealt with in the middle of this [election],” McConnell said.

Beyond discussing the Supreme Court nominations, McConnell also expressed sympathy for the opioid epidemic and described how legislatures are considering it.

“A couple of years ago, I thought it was sort of a Northern Kentucky thing; it’s not. I’ve had members running for president come back from New Hampshire saying the biggest issue in New Hampshire is opioid abuse — in a presidential election,” McConnell said.

McConnell explained that the Comprehensive Addiction and Recovery Act, which was passed on March 10, will increase funds available for areas related to addiction and recovery.

As the opioid problem continues, the Senator also describes having to debate sentencing reform and reconciling the concerns of law enforcement with aiding the victims of the epidemic.

“[While I’ve been in Northern Kentucky], I’ve not only talked to people who are involved in [addiction and recovery advocacy] but a lot of law enforcement people. And, it leads me into a further discussion on the whole issue of criminal justice reform,” McConnell said.

McConnell went on to discuss support and opposition for the Sentencing Reform and Corrections Act. The bill, as summarized by Congress’s website, enables a court to reduce sentences for “certain non-violent defendants convicted of a high-level first-time or low-level repeat drug offense (including unlawful import, export, manufacture, or distribution of, or possession with intent to distribute a controlled substance).”

He said the bill is supported by the majority of Democrats, including President Obama. His side, however, is mostly divided on the issue.

“The reason it’s kind of divided is that you’ve got an awful lot of people in the law enforcement community that are not really convinced that having lighter sentences is a good idea,” McConnell said.

NKU Federalist Society President Kristin Turner was quite pleased with how the discussion went. She believes McConnell explained his position well.

“I see where his stance comes from… I think he’s standing behind history,” Turner said.

“My impression of the Senator is better now than it was when I had gotten to the meeting.  He answered the unscripted questions very honestly and frankly. [As for] my particular question, although I didn’t like his answer, I appreciate the fact that he was very clear, concise, and succinct.”

Ken Katkin, a professor of law at Chase, found some fault with the reasoning about traditionalism, since “there have been very few vacancies during election years”; however, Katkin was also pleased with the event, saying that, “I think he made his argument more completely here at NKU than he has anywhere else.”