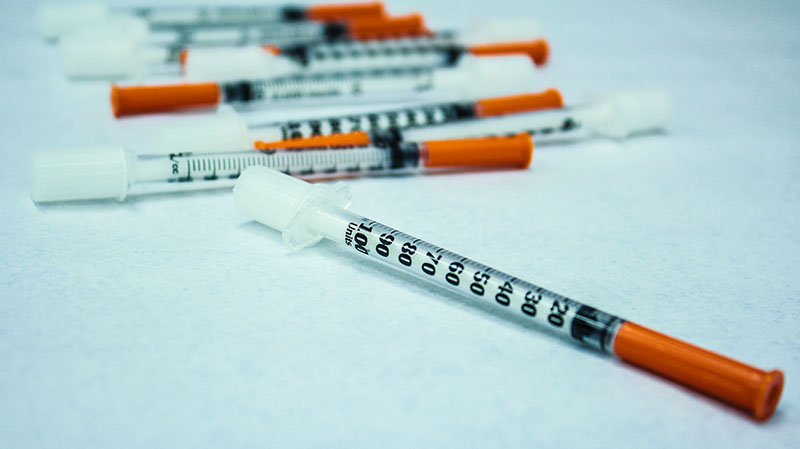 The syringe access exchange program in Grant County provides patients with clean syringes and a sharps container. The program is open every Wednesday from 1:00-4:00 p.m.

One Northern Kentucky county has launched a controversial new program in an attempt to reduce the region’s hepatitis C rates, which are 19 times the national average.

“It’s the only public health tool that we have,” Hunter said. “If we had anything else that we could offer to help people not get hepatitis C, we would. But this is it.”

Hunter hopes syringe access exchange programs will help alleviate the staggering rates of hepatitis C, reduce the amount of discarded needles in the community and provide a pathway into treatment.

Although the concept of these programs is not new, the idea of providing heroin users with the tools to inject is controversial.

Dr. Perilou Goddard, an NKU psychology professor, dedicates her research to examining attitudes of various groups of people in regard to potential responses to the region’s heroin crisis, which includes the idea of syringe exchange.

She explained that one reason syringe access exchange programs are so controversial is because people don’t know a lot about them.

“I’ll bet most people in Northern Kentucky would never have thought – our kids, our friends and neighbors, would become dependent on heroin,” Goddard said. “That’s an other people idea. That happens to those people, not to my people. And now, it’s like, ‘Oh… it’s happening to my people. It’s my kids, it’s my neighbors, it’s my students that are experiencing this problem.

“Really we were kind of caught wrong-footed on this. We were caught… not ready for it, we didn’t see it coming. And so these [syringe access exchange programs] are really radical new ideas to people here.”

Kentucky Sen. John Schickel, an NKU graduate, is opposed to the idea of syringe access exchange programs because they provide the equipment that allows individuals using heroin to continue illegal drug use.

“But yet, we the government are going to provide, at taxpayer’s expense, a means for you to break the law.”

The two-year-old program has served over 800 people out of a mobile unit, under one premise.

“Harm reduction, which is the philosophy that we work off of, that’s what we do,” Harrison said. “We recognize that there is innate harm in injection drug use, but we give people the ability to reduce the harm on their own terms.”

In addition to clean injecting equipment, the Cincinnati Exchange Project provides hepatitis C and HIV testing as well as assistance to those who test positive.

Harrison said the program also offers pregnancy testing, as pregnant women are the only demographic that can receive immediate treatment.

For those interested in treatment, Harrison’s program assists in navigating the process.

“People want treatment all the time,” Harrison said. “They come in, they ask for help understanding treatment, where to go. We set up a time to meet later, and then we map out a path of how to get to where they’re going.”

Lynn Smith, an associate professor in the Department of Nursing at NKU, agrees that the programs do not encourage drug use.

“The fact that they are given a clean needle… does nothing at all to affect the disease of addiction. And it’s not meant to.”

In addition to the notion that syringe access exchange programs encourage drug use, those who oppose the programs are also less likely to believe that addiction is a disease, according to Goddard.

“[Syringe access exchange programs] are always the least acceptable. That one’s the one that people… it’s like it’s a bridge too far,” Goddard said.

Unlike Goddard, Schickel does not believe that heroin addiction is a disease.

“A lot of people say, ‘Well heroin use is a sickness.’ I disagree with that,” Schickel said. “Use of heroin is a choice, just like smoking is. We make choices in life, and we have to deal with our choices.”

Schickel said while he understands syringe access exchange programs may cut down the spread of hepatitis C, he feels the programs have little impact on the overall problem.

“If you look at our Northern Kentucky Health Department, they kind of have this big brother mentality like they know what’s best for us, and I just don’t agree with that,” Schickel said. “There are arguments that can be made that it [syringe access exchange programs] would cut down on hepatitis, and we need to cut down on hepatitis, but there’s no legitimate evidence that shows that it cuts down on heroin.”

Hunter and other public health officials realize that syringe access exchange programs won’t cure those with a heroin use disorder.

“This syringe access exchange program is not going to solve the heroin problem,” Hunter said. “That’s not what it is. What this will do is help decrease the effects for that person and our community from the hepatitis C rate and the tsunami of HIV that could come after that.”