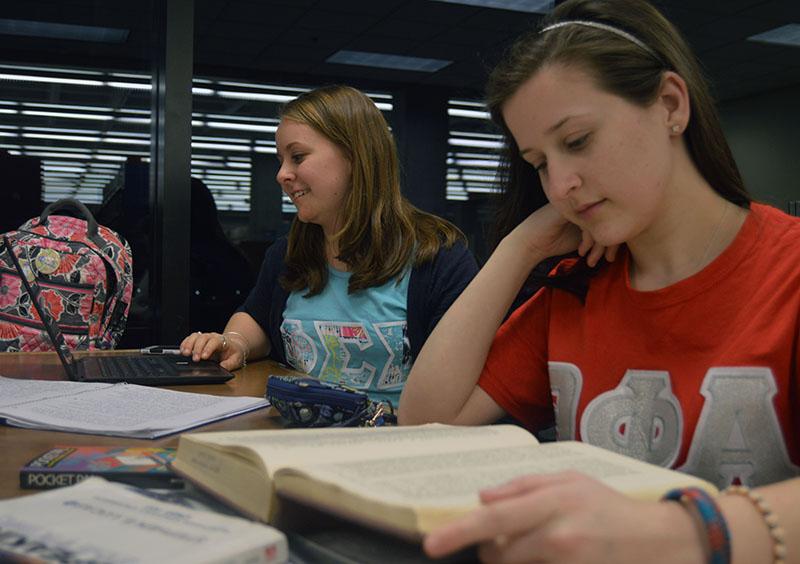 Sorority members participate in study tables in the Steely Library. On average, students who go Greek have a higher GPA.

With numerous academic programs and advantages, going Greek has proven to be a beneficial option for improving students’ grade point averages.

According to members of the Greek community, this is due to a large amount of support and encouragement each chapter gives to its members. Some NKU students find that support in other places, however.

Adam Dralle, coordinator at the Office of Fraternity and Sorority Life, said every organization on campus has a system in place to promote academics, between academic chairs, which are positions to direct and promote academics within a chapter and study hours or a form of “academic probation” to give struggling students a chance to better their grades.

Additionally, Dralle explained that every chapter has a minimum GPA requirement for being a member.

“It’s a lot of the role that parents or guardians would fill… practicing a speech and quizzing and doing all that stuff,” Dralle said, “Your fraternity brothers and sorority sisters fill that void.”

Hannah Hall, junior at NKU and member of Phi Sigma Sigma, said that there is a lot of pressure and responsibility to being in a sorority, but that it prepares students for the real world and keeps them accountable.

Some students at NKU have participated in Greek organizations in the past, but decided it wasn’t right for them.

“I did feel more included on campus, I just was really stressed out from trying to balance school, work and a sorority,” Appel said. “I was being a social butterfly, always wanting to socialize, so that was hard for me.”

Rob Norwood, junior at NKU and a non-affiliated undergraduate student, said that most of his free time goes towards academics. With a 3.4 GPA and a heavy workload, Norwood said that participating in Greek life never crossed his mind.

“I honestly feel like I’m pretty academically strong right now…I feel like something as big as Greek life in my life would probably steer away from that and deter my focus,” Norwood said.

Another non-affiliated undergraduate, DeShawn King, sophomore at NKU, said that the key to academic success is more about a student’s environment.

“As long as you’re around the right people on this campus, you’ll be fine…as long as you know what you’re supposed to do and have people that will help you go through that process,” King said.

Despite not participating in Greek life, King still said that he has done well for himself at NKU.

“I’ve had internships. I have a nice GPA. I’m recognized on campus as far as organizations,” King said. “It all depends on what [Greek] organization you’re in. The goal of most of them is to help you succeed in life, not to keep you back or push you backwards. They want to see you succeed and become a better overall man or woman.”

In addition to seeking academic success, she described Greek life as a number of parts working to benefit the whole community and express these values.

“It’s kind of like a diamond, you know? A diamond sparkles not because one part of it is shiny, but because there’s lots of places that have been polished,” Vance said, “They refract and reflect all of that onto each other.”