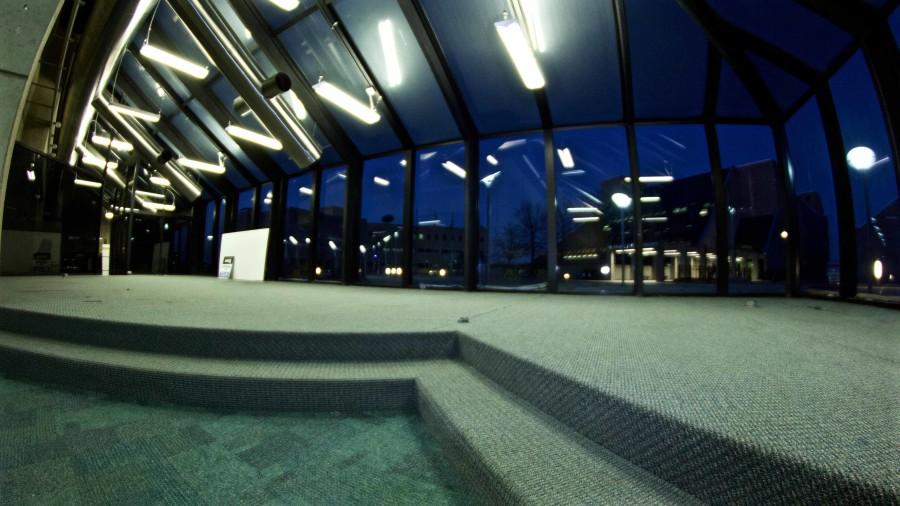 Founder’s Hall, the five-story facility once home to an array of departments and offices, is now dimly lit with silent corridors.

Tables and chairs are stacked up against walls in the once bustling lobby.

Light pools into the hallway, the mark of The Wellness Center, the last department to be moved from the otherwise vacated building.

In the almost vacated building Kim Baker, employee wellness manager for the Wellness Center, sits among partially packed boxes. Baker described her tidy desk, surrounded by windows, as her own hub of activity.

“I’ve felt a little more disorganized than usual, but as long as I have my computer and my immediate files I’m fine,” Baker said.

The department found out Founders Hall would be closing due to renovations and the construction of the new Health Innovations Center last September, according to Baker.

The new location of the Wellness Center will be located in Griffin Hall 139, in the old health informatics lab.

“[NKU has] had to look at each face and each department individually to figure out what the best scenario would be,” Baker said. “They’ve had to play chess with some of the offices to get things moved.”

Founders was home to departments such as Criminal Justice and Political Science. Before the spring semester began, some departments took priority over others in finding new niches across campus so that classes in these departments could start back smoothly, according to Baker.

“It’s a building that houses a lot of different classrooms, faculty and staff offices,” Baker said. “Finding a place to relocate everyone is definitely a big challenge. It’s a long process and there are many layers throughout the process. It’s a tight timeline as well.”

The majority of offices and departments have already made their transitions throughout December and January. On Tuesday, FUEL NKU moved out of Founders 330 to University Center 142. Baker is banking on a phone call sometime this week to move completely over to Griffin.

“It’s a dynamic time at NKU, so I think a lot of people are trying to be flexible in their location in anticipation of the new health innovation center,” Dr. Dale Scalise-Smith, dean of health professions, said.

Alysa Monae Mcgovern, a sophomore nursing major who works as student wellness ambassador in the center, is excited for the Wellness Center to transition to Griffin Hall. Mcgovern believes the transition could help the department reach out to more faculty and staff.

“Every time there’s a new experience people are wary about what to expect,” Mcgovern said. “There will always be challenges, but there’s going to be surprises as well. I haven’t seen the room [in Griffin Hall], but I’m excited to see what we’re working with.”

The Wellness Center has also seen budget cuts to compensate for renovations and construction and, according to Baker, other members in the department left for other opportunities. The staff of the center has gone from a workforce of four to one.

“When [the Wellness Center was] at full-staff and running at full steam we were winning greatest employer of the Greater Cincinnati region multiple years in a row,” Baker said. “I feel like we might’ve lost some of that momentum, but I’m really hoping once we settle into this space we’ll bring wellness to the forefront again.”

Baker believes that the transition will help the Wellness Center grow. Griffin Hall is the newest building on campus; with the College of Informatics being on the forefront of wellness, Baker feels as if the future would be bright for the center within the technological walls of Griffin.

“It’s not a location you’d expect on the campus, but a place that will be proximal to the new center as well as be accessible across campus,” Scalise-Smith said.

With the location of Griffin being more central to campus, especially to the bustling hub of the Student Union, the Wellness Center would be easier accessible to both students and faculty alike, according to Mcgovern.

The transitions happening campus-wide to make room for the health innovation center have confused a handful of students and staff searching for departments once housed in Founders, which was built in 1974 and is one of NKU’s first academic buildings.

“Just this week we’ve had people come in saying ‘Oh, where’d everybody go?’ We’ve been able to redirect them to where they need to go,” Baker said.

The Wellness Center is also frequently confused with Health, Counseling and Prevention Student Wellness Center, which is located in UC. The two centers frequently partner with one another and in the future, especially with the emergence of the health innovation center, Baker hopes to work more with this center among others to spread campus-wide wellness initiatives.

“I’ve still been able to manage my work and do what I need to do to be successful,” Baker said. “Once I am moved and I am settled, I’ll definitely feel better. I think I can work on even doing more work at that point.”

The Wellness Center should be ushered out of Founders within the next week, according to Baker, who is waiting for the call to move to Griffin. With the Wellness Center moved, Founders Hall will be vacant for all but stacked chairs, empty rooms and the sounds of construction.