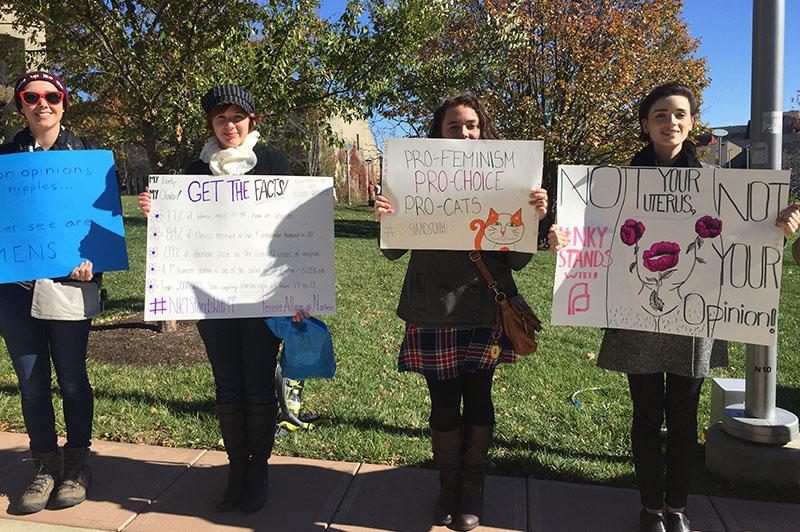 Not everyone can say that they have survived an attempted abortion.

Sara Palomino, a NKU student, did not survive just one – she survived three.

Palomino, a member of Northern Right to Life, shared her story on Nov. 13, when several NKU student organizations held a demonstration involving the voices of those in favor and against abortion.

“My mother tried to abort me three times,” Palomino said. “They were very different methods, very unethical, unsafe, not medically done methods of trying to harm me and I survived. There was purpose for my life.

Three times my life had tried to be taken away before I was even born. I was alive, there was life in the womb. Before I was even given birth to I can’t not say it, but God had a purpose for my life. I had to be born for some reason, for some purpose. I’m supposed to be saying something about it. Even if it’s hard to talk about it, it’s challenging, people disagree with you. I have a real testimony.”

Student organizations such as Northern Right to Life and Feminist Alliance at Northern discussed issues surrounding abortion and Planned Parenthood.

Kate Gandenberger, president of Feminist Alliance at Northern, said that the feminist group supports women’s rights and encourages women to have the strength to make their own, independent decisions. The group also advocates for women to have a positive body image.

“There’s nothing wrong about being a woman,” Gandenberger said. “You shouldn’t feel ashamed for being a woman, you are lucky to be a woman. I think groups like this give women the idea the things they are shameful and things they do should be hidden and not talked about, we should talk about this. It’s really important to talk about.”

NKU student Ashley Stuck walked by the protestors and joined the discussion.

“I am pro-choice. I have not always agreed with abortion,” Stuck said. “It’s been a difficult topic for me. I did become a mother at 17, not exactly by choice. I did contemplate abortion, because I was absolutely terrified. But then being threatened with being ostracized from my family I ended up having my baby girl, which thank goodness I did she’s one of the greatest joys of my life. Being forced into that was a huge experience and negatively at that.”

Palomino discussed how Planned Parenthood enables abortion, which is something that Northern Right to Life is against.

“From this I want people to take away that Planned Parenthood is an abortion business,” Palomino said. “What they are doing is not just health services that they mask it to be. There is more to it and basically their business is abortion. Their business is not to support women.”

Gandenberger said that she appreciates the openness of those willing to express their views.

“I am so proud that I go to a school that is so accepting. We have had so many people walk by and tell us we are doing a good job,” Gandenberger said. “It makes me happy to know this campus is so woman friendly and so opinion friendly. That is one of our goals. We don’t want to shush them, we want them to speak their viewpoints.”