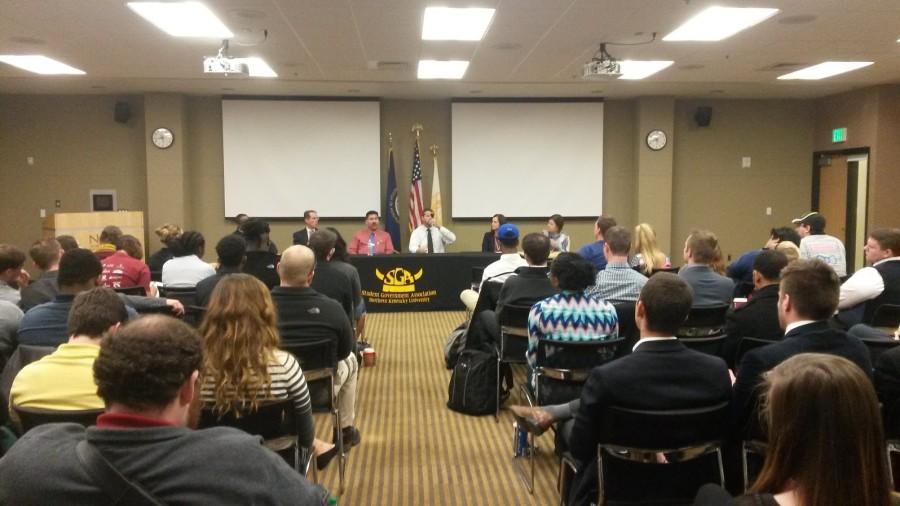 President Mearns, Chief of Police Les Kachurek and other members of the executive board address safety concern at the town hall meeting on Monday, Nov. 2.

Students from a variety of backgrounds and affiliations gathered in the Student Union Monday evening for a town hall meeting. Despite their differences, the students expressed one common concern– the safety of the campus community.

President Geoffrey Mearns, Chief of Police Leslie Kachurek and other members of the executive cabinet were in attendance to address student questions.

Jeff Baker, safety coordinator of environmental safety and compliance, said that a public address system is in place in the event of a campus emergency. A voice will play over the PA system, which would issue instructions. This system can be heard at  any position on campus.

In addition to the PA system, members of the campus community, including parents, can sign up to receive the Norse Alert, the university’s emergency notification system.

According to the university’s website, the Norse Alert is only issued “when there is the potential for imminent danger to NKU students, faculty, staff and campus visitors… campus crimes or other situations that are not considered to pose an imminent threat of danger will not activate the Norse Alert.”

Kelly Martin, assistant vice president for marketing and communications, said that anyone can sign up to receive Norse Alerts through the university’s website.

She also said that she has been working with Amanda Nageleisen, director of public relations, to better educate the campus community on how to receive text messages in the event of a campus emergency.

“We have been working on emergency communication and protocol,” Martin said. “One of the things is, how do we communicate with and educate our faculty, staff and students about where to find some of these things.”

Martin said that they are working with IT to explore the possibility of automatically enrolling members of the campus community to receive the Norse Alert.

Chief of Police Leslie Kachurek said that because emergency response procedures are constantly evolving, the best way to learn how to address emergency situations is to debrief incidents that have already occurred.

Kachurek also said that a comprehensive presentation highlighting emergency procedures is a possibility. The presentation would include the procedures in the event of weather related or medical emergencies. It would also explain what to do if there is ever an active shooter on campus.

He said the presentation would be used at student and parent orientation and also at future town hall meetings or other meetings concerning safety.

Senior Amanda Rogers said that although incoming students are aware of emergency procedures, she feels that protocol is not clearly communicated to upperclassmen.

Baker said to combat this issue, emergency operation planning has been looking into having building coordinators to assist students in the event of a crisis. This way, if an emergency arises, there is an individual equipped with the knowledge to handle the situation in every building on campus.

Sarah Aikman, director of the student union and university center, said that it is extremely difficult to get students to evacuate buildings during a fire drill.

Aikman asks students who are educated in how to handle an emergency to assist staff and faculty members if a building needs to be evacuated.

“Listen to the people that are in charge, your professors or the building staff that tell you where to go, and help them get the rest of the students out,” Aikman said. “Because honestly, it’s probably one of the most difficult things to happen.”

Arnie Slaughter, director of university housing, said that although university police officers patrol the residential villages, he hopes to implement a system in which officers are assigned specific residence halls to patrol.

He said this kind of system will encourage officers to build a relationship with students who live on campus.

“I stress the importance of reporting things, but it’s much easier to report them if you know the officers, and if the officers know the individuals who are a part of our campus community,” Slaughter said.

Kachurek said that university police implemented daily structured walking posts about a month ago. He said that officers are required to walk 20 minutes in different areas at least three times a shift.

“We can’t eliminate vehicular patrol obviously because it’s the quickest way to get from point A to point B, but when they’re on foot you get that intimate contact, you eliminate that windshield barrier,” Kachurek said. “You get to know us, we get to know you.”

Slaughter also explained that a number of factors were considered when deciding not to use a guest check in system within the residence halls, such as the location of the university as well as the amount of pedestrian traffic.

Slaughter said that the current policy involves the guest of the student being escorted by the director of the facility.

“We also encourage our residents, that if you don’t know someone, or if you see someone that you don’t recognize, please don’t let that person into your hall,” Slaughter said.

He also said that front desks of residence halls are staffed from 8 a.m.-10 p.m. to ensure the safety of residents.

Chief Kachurek said that he and members of the police department will enforce whatever they are told to enforce by members of administration.

“We will enforce all laws and all university policies that are currently stipulated,” Kachurek said. “We’re not activists, we’re not going to advocate for one position or another, we’re simply going to enforce existing law and policy.”

He also explained that those who have a concealed carry permit may store their firearm in their vehicle as long as it is stored in the trunk, in a locked box or in a locked glove compartment.

President Mearns said that any policy change, even a minor one, must go through an extensive phase of research.

“Before we change the existing policy, we would need to get a lot more information about the views of folks on campus- faculty, staff students,” President Mearns said. “We would also have to take into account the safety of people who come to campus.”

President Mearns also said that although several students have expressed interest in the idea of a concealed carry policy, he and members of his cabinet are not actively researching the topic.