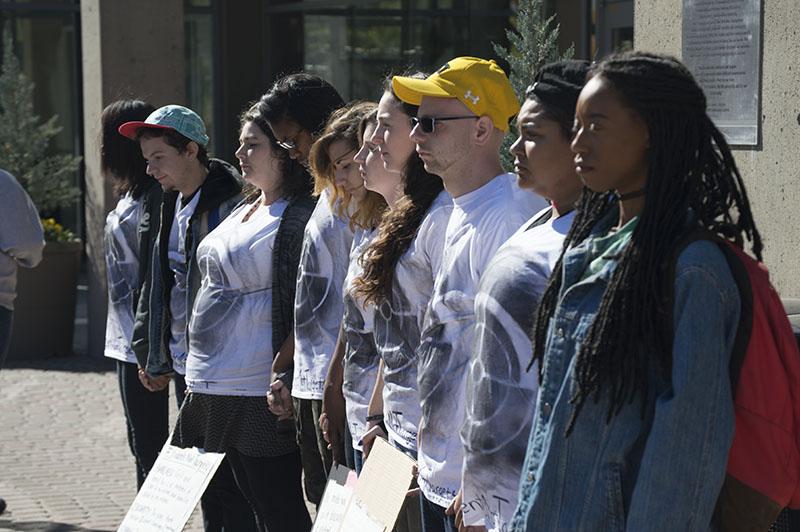 Students stand during the silent protest bringing awareness to school shootings and gun violence. The protest was organized by Students for Social Change.

Students stood in silence outside of the Student Union on Monday wearing targets on their chests. Their homemade shirts bore a black target on the front. Written on the bottom of the shirt was “#StudentsNotTargets.”

Propped against their legs were signs that called for awareness and solidarity.

The silent protest was organized by Students for Social Change, a newly formed organization.

Senior integrative studies major, Quinn Docter, helped start up the organization with student Morgan Bell. The night before, Docter and Bell spray painted the shirts for the silent protest. The protest was about gun violence and how people can work to improve campus safety.

“It brings awareness… It’s real,” Docter said. “It [the issue] usually gets pushed to the back burner.”

One student grabbed the hand of one of the protestors and stood with them. There were spectators in favor of the cause.

“I think it’s really powerful… It’s hard to watch,” Rae Loftis, coordinator of LGBTQ programs and services, said. “I don’t like to see my students with targets on them… It takes a lot of courage.”

Others had a different opinion on the situation.

“I think gun-free zones leave people vulnerable,” freshman Jonathan Mullins said. “It makes sense to be able to defend yourself. I think if somebody has a license to carry them, they should.”

Docter wants the protest to serve as a way to help make the campus safer; not necessarily take away guns.

“We gotta stop fighting each other,” Docter said.

Other students and faculty stopped to take note of the situation while taking photos. Norse Violence Prevention intern, Katie Herms sat by the protest in case anyone experienced any emotional distress from it.

“I think it’s an excellent way to get the ball rolling,” Herms said. “It’s an issue we aren’t talking about.”

During the protest, the students dropped to the ground, as if they had been shot.

“I hope it was impactful and made them think,” Docter said. “I hope it made people uncomfortable… That causes change.”

There will be a “Discussion for a Solution” on Monday, Oct. 26 in UC 414 from 5-7 p.m. The discussion will be where students and faculty can come together to work toward a safer environment.