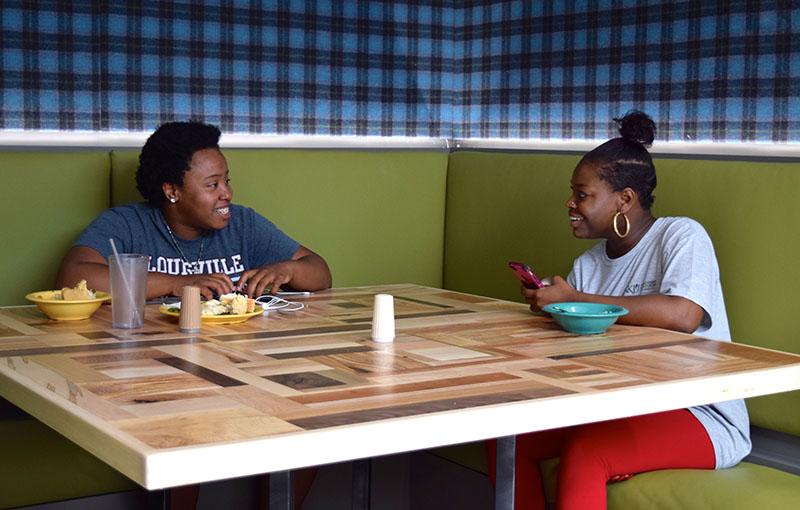 Two students socialize over lunch in the new Callahan Bistro.

A two-tiered couch, illuminated walls and different seating spaces are all features of the newly renovated Callahan Bistro, which reopened Oct. 4.

Modern architecture comes to life in the Bistro, as the dining facility was designed to look like several different rooms, each with their own feel.

One room of the Bistro features walls with rows of tiny holes to make it look as if light is coming through. This space also has a two-tiered couch that wraps around the perimeter of the room.

Shallen Sabino, a freshman biochemistry major, said that this space in the Bistro is where she typically eats.

The Callahan resident said that the modern look of the dining facility has made it her favorite place to eat on campus. She said that she enjoys that the new Bistro is more than just a place to eat.

“My roommates and I were studying up on the cushions the other night,” Sabino said. “It’s a really cool place to meet other people from the dorm too.”

The center of the Bistro is open with long tables for seating. Another portion of the facility has an alcove space with a booth for those who prefer more private setting.

Freshman Paige Carter is also a resident of Callahan Hall. She said that the opening of the Bistro has made dining more convenient.

“It’s really nice, especially after I’ve been up all night studying, to come down and grab breakfast and a cup of coffee,” Carter said.

Callahan Bistro will be closed Oct. 10-12 for fall break. The Bistro will reopen for dinner on Oct. 13.