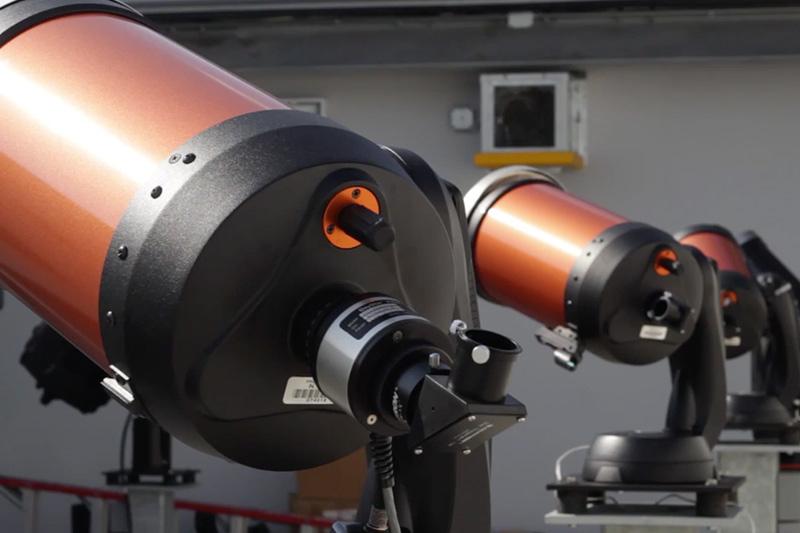 The opening of the observatory on top of Founder’s Hall at NKU will be short lived when the building’s renovations begin, which is in conjunction with the construction of the Health Innovation Center.

Dr. Nathan De Lee, astronomy professor, explained that the observatory will remain closed until the renovations are complete. The current estimate is around two years.

However, since the equipment is mobile, students who are taking astronomy courses and participating in research will still be able to use the telescopes, according to De Lee.

Shandon Stamper, junior computer information technology major who worked on the observatory over the summer, wants students to take advantage of the facility while it remains open.

“It is such a quality facility,” Stamper said. “Everyone should go experience it before it closes for construction.”

The observatory, which opened in August, is the result of many years of planning. In fact, Dr. Charles Hawkins, professor emeritus in physics, explained that the project dated back to the 1990s.

“As we were finishing up, people started asking how long we have been working on this,” Hawkins said. “I started digging and I found an email from September of 1998, which was a couple months after I became department chair and I had called for a meeting on how to go about getting an observatory.”

It wasn’t until 2010, when David and Julie Schneider expressed interest in funding the project, that serious plans began.

Along the way the committee, which was primarily made up of department faculty that taught astronomy, faced problems with such factors like location and safety.

“The lawn next to the honor’s house is actually a very nice place and we originally thought that we could build the observatory there,” Hawkins said. “It is on the ground and is visible when you come onto campus. The problem was that the university’s long range plan had other things in mind of what they wanted to do there. So the question then became do we want to build an observatory there but then have to tear it down in 15 or 20 years?”

The Founder’s Hall roof was the next ideal place. However, they did experience issues with parapet and weather. According to Hawkins, this meant that they had to design ways in which people wouldn’t be drawn near the edge of the building as well engineer a rollaway roof that wouldn’t blow off during severe storms.

The observatory ended up costing approximately $540,000, a price that the committee was able to achieve by placing it on top of Founder’s Hall.

“There were already some laboratories a floor down,” Hawkins stated. “There is power and Internet that we can hook directly into. There are elevators, so we have handicap access. We will get a room on the fifth floor as a control and storage room, so we don’t have to build that on. Basically, there was a lot of potential cost that we didn’t have to worry about because it was on top of Founder’s Hall.”

The observatory has also benefited the department in numerous ways. One of which is the expansion of their program, which now includes an astronomy minor.

Johnathan Wilson, junior physics and mathematics major and astronomy minor, was very excited about the opportunity to be apart of the program.

“Is there anything more amazing than looking up into the night sky,” Wilson explained. “By taking a couple of those classes it helped magnifying my interests in astronomy and now I can continue that curiosity.”

Ultimately, the facility is a way to generate a love for science through a hands-on experience, according to Neil Russell, a post-baccalaureate physics student.

“The ability to have people experience seeing the objects for themselves beyond the pictures they see online or on TV, I think that they will just be awestricken,” Russell said. “It is like the Grand Canyon. No pictures can do it justice. It is just your eyes seeing it and it creates a sense of wonder and awe in you that gets you excited about science. For the purposes of science outreach, it is just mind blowing what it could do.”