VIDEO: Students dig to uncover pieces of America’s dark past 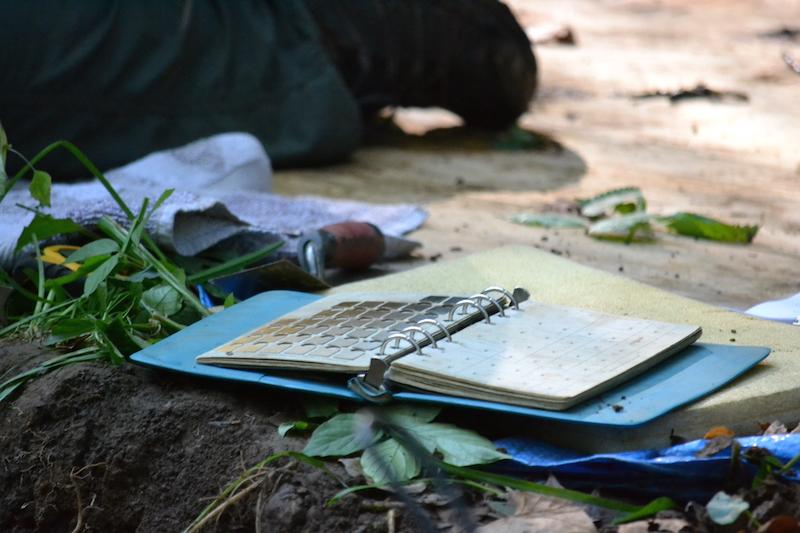 Students used a layout in a grid pattern to keep track what was being uncovered at the Parker Academy. NKU students visited the academy on Wednesday Sept. 16 to uncover the history of the school.

Today the Parker Academy is a beautiful field of green, but this field contains many shadows of the past that still cling to the earth.

There is a big pit in the center of the field where the old school building used to be.

A handful of students dig where the boy’s dormitory once stood. The only building that still remains is the girl’s dormitory in which the man who owns the property currently resides.

Students from NKU’s anthropology and history programs went to Parker Academy Wednesday, Sept. 16,  just 20 minutes from NKU, to spend the day digging to uncover relics of runaway slaves in the early 1830’s.

Professor Sharyn Jones, department chair of anthropology, brought many students in her anthropology classes to get their hands dirty at Parker Academy and feel what it’s like to uncover remnants of America’s dark history.

“This was a place of resistance,” Jones explained. “Yet the Parker family continued education on this site. There was a lot of racial conflict at the time yet this was a place where anyone could come.”

The school educated students black or white, boy or girl. Race did not matter to the Parker family. This was unusual at the time because girls didn’t go to school and certainly people of color weren’t allowed to be educated.

“This site still shows the archives and remnants of the school. There are grade books, flyers, and homework stuffed into the walls”  Jones said pointing to the pit in the middle of the field where the school once stood. “We have found rocks that aren’t from around this area. You can tell by its shape and texture, it’s from a different region. My guess is the New Richmond area. We also found remnants of a harmonica.”

Dr. Clarence Newsome, president of the Freedom Center in Cincinnati, said that a harmonica is more than a simple instrument; the harmonica symbolizes equality.

“Black instrumentalists played a huge part on the plantations,” Newsome said. “The songs those instrumentalists would play on their harmonicas would travel from plantation to plantation. It became a way the slaves would communicate, but music is more than that. Music helps us cut across the lines of inter-racial, inter-gender issues.”

Uncovering these precious artifacts goes beyond racial equality. It will impact the future of our community.

NKU President Geoffrey Mearns was in attendance and discussed how this dig affects the NKU community.

“This is an opportunity for our students to gain knowledge, but also practical learning experience and has a positive impact on our community,” Mearns said. “What they are unearthing here is a very important institution that helped to shape the future of our country and so it’s a great example of the integration of knowledge and community impact.”

Students from the Public History class had an eye opening experience as they realized how important it is to connect history to the community.

“History made us, [and it] defines us,” Brian Hackett, professor of the class said.

As the professionals sat in a tight circle near the pit of the Parker Academy they took a moment and pondered that statement for awhile as they discussed the issues of the United States past and present. They brought up the dark history America has and how the country hides its ugly past.

“We want to believe we are great, because we work hard. We don’t want to talk about the genocide that built our country,”  Dr. Carl Westmoreland, Freedom Center senior historian, said.

The sound of sifting dirt and clinking shovels as they hit rocks creates a smile on Dr. Newsome’s face and stays.

“These young people are looking to make a difference,” Newsome said. “It all comes down to the narrative. Looking for the right people who will make decisions not based off of interest, but the interest of the society.”

The students uncovered the truth and exposed the unknown stories of these runaway slaves. Their findings will help their stories live on for another 100 years, because these artifacts will go on to museums like the Freedom Center.

“There’s nothing truer than dirt, these students are touching the truth,” Dr. Newsome said.

Correction: This article originally stated that some rocks at the Parker Academy were from Africa. Professor Sharyn Jones believes that some of the rocks could be from the New Richmond area.