Students concerned as class remains unevacuated with gun nearby 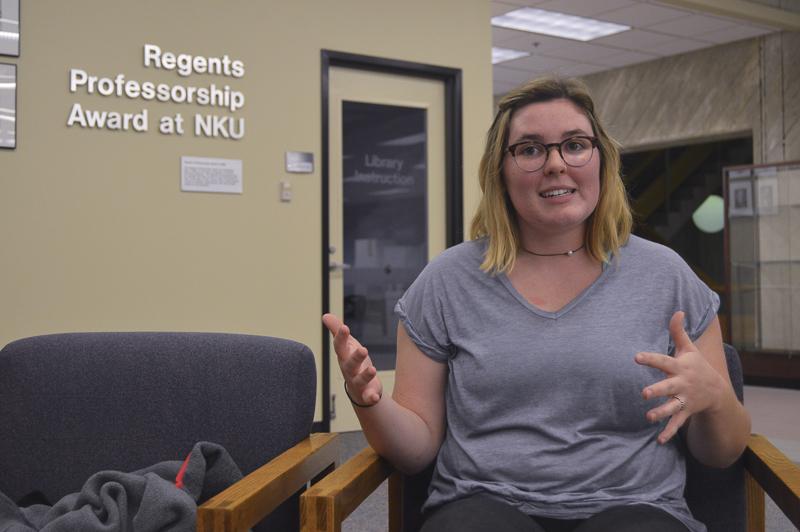 Sophomore Avery Fithian sits in front of the classroom she was in on the third floor of Steely. Her class was not evacuated although there was a gun nearby.

Police officers stormed through the third floor of Steely Library with their weapons drawn. Through the clear door of the classroom, Avery Fithian could see students streaming out of the library. At the time, she and her classmates were unaware that a student was in possession of a Cobra .380 pistol on the very same floor.

As more and more students ran by, evacuating the classroom seemed like more of a possibility. Fithian said her teacher looked out the door to try to determine what was happening, and although she and her classmates felt unsafe, they were not evacuated.

The sophomore biological sciences major said she was initially upset with the decision. She said that even though the situation was quickly resolved, she and her classmates had no way of knowing.

“We had no idea what was happening,” Fithian said. “We just saw the policemen running by, and they didn’t even send out a Norse Alert saying, ‘There’s a suspect in the library with a gun.’”

NKU sent out a statement in the late morning of Aug. 27, which said that university police responded to an incident involving a student in possession of a gun. The statement also said that no shots were fired and that the gun was “inoperable.”

The incident report said that Johnson indicated to authorities that there is a particular spot in the library that she likes to sit at because “of its location to observe anyone approaching.” When Johnson noticed that her seat was taken by another student, she displayed her gun and asked the student to move.

Johnson stated in the incident report that “people are after her and that she has contacted the FBI for help.” When authorities asked who was after her she said that she “did not know, but they follow her around and they talk about her.”

President Geoffrey Mearns sent an e-mail to the Northern Kentucky University community last Wednesday, nearly a week after Johnson had a gun in Steely Library, addressing requests for open records.

“Within minutes of being informed of the incident, I assembled several members of my executive team,” Mearns said. “By that time, our police department had apprehended the suspect and confiscated a single, loaded firearm. Upon inspection of the firearm, police determined it was jammed, rendering it inoperable. No additional weapons or additional ammunition were present, and the police investigation produced no evidence that the student attempted to fire the gun.”

Mearns also said in the e-mail that the university’s decision to not issue a Norse Alert was congruent with the policy for the alert system, which is only necessary “if there is a significant disruption of campus services or if the campus is in imminent danger and individuals should take immediate safety precautions.”

Students questioned inconsistencies between the press release and the incident report, as well as the decision to not issue a Norse Alert.

Conrad Krieger, a senior music education major, said that it was irresponsible of the university to not issue a Norse Alert. Krieger said that by noon he had heard multiple versions of what had happened.

“Honestly rumors spread a lot faster than the truth does,” Krieger said. “It doesn’t take long for that kind of stuff to happen, and that’s going to cause more of a public disturbance than to interrupt class to let people know that it was taken care of quickly and efficiently.”

Junior sports business major Joe Trammell has created a petition for members of the NKU community to voice their concerns. He said that he wants administration to see that people were frustrated by the way the information was communicated.

“I would like to see that they would admit that they were deceptive in it, and then just promise to be open with us about things like that,” Trammel said. “Nothing terrible happened out of it thankfully, but it’s still a pretty serious event and I think that we should have the right to know exactly what happened.”

Trammel said that multiple students and parents have commented on his website, voicing concerns of safety and communication.

“If I were called into the dean’s office, they would have a pretty reasonable expectation that I would be truthful with them about whatever they were asking,” Trammell said. “So I think it’s reasonable to ask the same out of administration, that they would be honest with us as well.”

Lieutenant John Gaffin said that the incident has not necessarily changed anything in regard to the way campus will be patrolled.

“We have put a lot of time and a lot of effort and a lot of training into being prepared for something like this,” Gaffin said. “So if anything else it is a little positive reinforcement in that direction that we were doing the right thing, and we’re going to continue to do the right things. We’re going to continue to make training and practicing for responding to that kind of an incident a priority.”