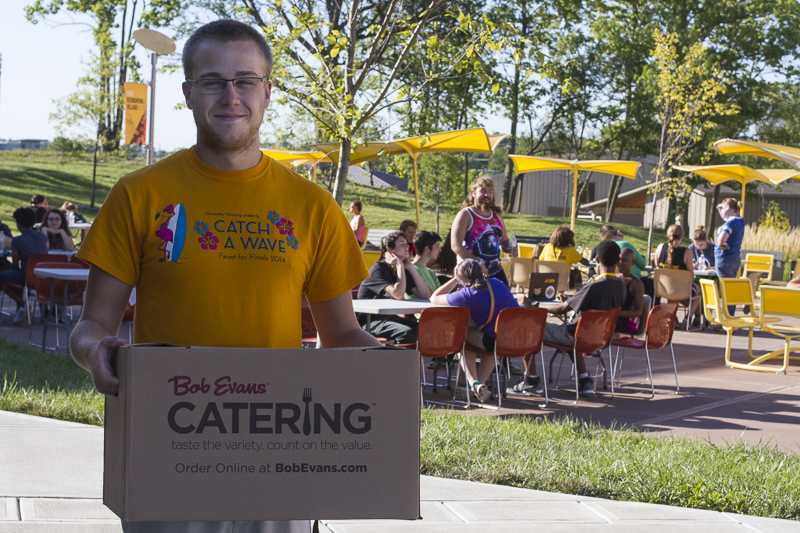 Dining must be fit into the busy schedules of those who live in Callahan Hall. As the renovations of Callahan Bistro remain unfinished, students must travel to main campus in order to grab a meal.

Renovations began last March, and were originally supposed to be finished by August 1.  Now, almost two months behind schedule, renovations will not be complete until the end of September.

Larry Blake, assistant vice president of facilities management, said that the delay is partially due to the unusual amount of rainfall over the summer, but other technical issues also had a significant impact on the renovations.

“A lot of things went wrong over the course of the project,” Blake said. “We cut into walls and found things that we have never found in walls before… every time we cut a hole we found something surprising.”

Blake said that the walls were built in a way that was cheaper at the time, but the poor construction of the walls has made the construction process more expensive and time consuming.

Blake explained that the construction crew also experienced difficulty moving in some of the larger kitchen equipment.

“It’s just been a bunch of little things all adding up to a two month delay,” Blake said. “Cost wise we didn’t have an overrun, but time… it was mostly time.”

Renovations were supposed to be complete before students moved in so that meals could be served in the brand-new bistro on the first day of class. Now that Callahan Hall is inhabited for the semester, construction crews must work more carefully.

Blake said that construction crews are currently working around students to complete the project. The majority of materials are being moved in overnight so that students are not disrupted during the day. Crews are working later in the evening and early in the morning to prevent additional traffic.

Megan Beckerich, a resident of Callahan Hall, said  the renovations have taken a toll on her morning routine.

“I try to come to campus early to eat breakfast,” Beckerich said. “I just would like to be able to quickly run in [to Callahan Bistro] for breakfast and then walk or catch the bus instead of making sure I set aside an extra half hour to get to campus.”

The senior international studies major said that although she is disappointed that Callahan remains under construction; she is surprised by the accommodations that have been provided for residents.

Beckerich said  that the residential assistants have been putting on dinner programs every Monday  and Thursday.

“On Mondays and Thursdays the RAs have been getting outside food,” Beckerich said. “They got Papa John’s, they got Firehouse subs one time. My understanding is that they’re trying to alleviate all of this.”

Arnie Slaughter, interim assistant vice president for student engagement and business operations,said  that housing has partnered with Chartwells to accommodate students who live in the east residential village.

Slaughter said that hours of operation have been extended in the Student Union, and students can temporarily access breakfast, lunch and dinner through their all card. Slaughter has also sponsored several food programs across campus, including the food truck (see page 3) that has been serving meals on the plaza in an attempt to alleviate traffic in the Student Union.

According to Slaughter, in addition to the dinner programs facilitated by residential assistants, Chartwells hosts dinner for students who live in the east residential village every Tuesday.

Slaughter said that the shuttle that transports students from Callahan to campus has been operating under extended hours and running additional routes to provide more students with a method to get to main campus.

Slaughter said that the renovation of Callahan bistro coincides with the growth across campus.

Slaughter said that although the old bistro served its purpose, it did not possess a warm, residential feel like that of the Village Cafe in Norse Commons or the Student Union. In addition to mirroring the feel of the existing dining spaces on campus, the new bistro will help to accommodate the growing east residential village.

“As we’ve increased our student presence on the east residential side of campus, which includes Northern Terrace and Callahan, we’ve added more residents to the community,” Slaughter said.

According to Slaughter, Callahan Hall and Northern Terrace house approximately 630 students between the two facilities.

Slaughter said that the new bistro will feature areas that include activities such as air hockey and a pool table for students to unwind. The actual dining facility will, much like the Student Union, allow students to choose between a variety of different seating options, including different themes and atmospheres.

“The frustration is going to be there, and we understand that. There are going to be obstacles here and there, but the end result will definitely be worth the wait,” Slaughter said.