10 things you missed at the Fall Convocation 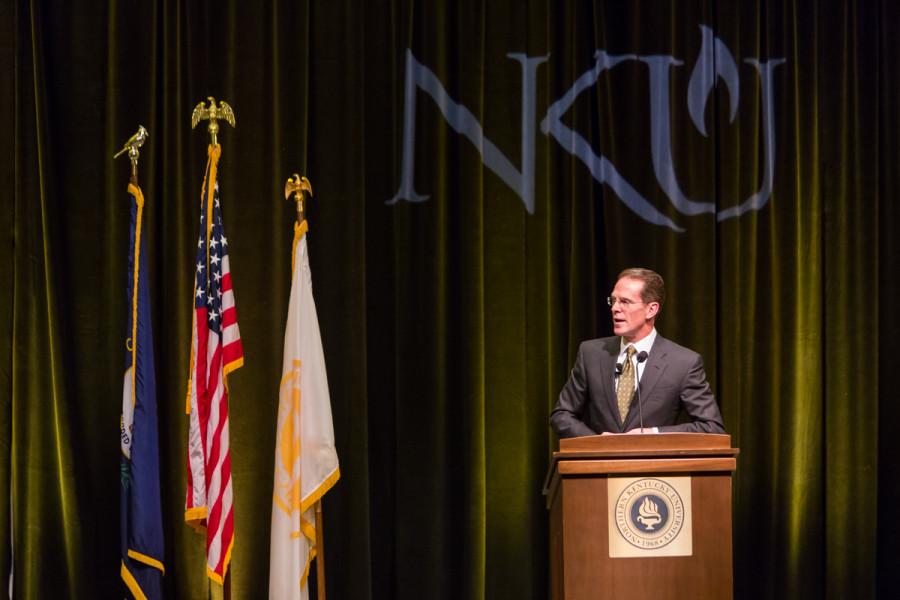 Mearns centered his speech around the continuing growth of the university, both academically and physically with the recent construction of the Rec Center and upcoming development of the Health Innovations Center. He also spent a large portion of his time highlighting several stories of university faculty, staff and students whose stories and efforts continue to bring pride to the university.

In case you decided to spend your final days of summer resting up before the pressure of school returns and the warm days of summer disappear, here’s what you missed this morning.

A push to better the university

In a common play, Mearns saved his the most powerful point of his annual speech for last, which focused on having the state move to an outcomes-based funding model, meaning that universities across the state would receive funding based on how the perform on a year-to-year basis.

The current model, which hasn’t been updated in several years, leaves NKU receiving the smallest amount of any public university in the state, while growing the most rapidly over the last 15 years.

Mearns says that the applications for this fall’s incoming freshman, who would be expected to graduate in 2019, increased 18 percent compared to last year and over the last four years applications have increased by 36 percent.

“The quality of our new students continues to grow. This year’s incoming class will once again be the most academically qualified class in our history,” Mearns said. “A decade ago, when we implemented admissions standards for the first time, the median ACT score of the incoming class was 20.7. This Fall, it will be 24, up considerably from last year’s median of 23.1.

The Center for Applied Informatics received a national award from the American Association of State Colleges and Universities for excellence and innovation in regional and economic development last fall.

“The CAI’s virtual co-op program was honored for its success in adapting the traditional co-op education model into an innovative program that provides almost all services virtually,” Mearns said. “To have this important work recognized by AASCU speaks volumes about our commitment to excellence and innovation.”

Mearns also added that this award qualifies the university for special research grants and scholarships.

This year’s outstanding professor is…

Cecile Marczinski, a professor of psychological sciences, was awarded the honor of the 2015 Frank Sinton Milburn Outstanding professor award.

“You join an elite group of faculty who have changed the lives of countless students,” Mearns said in his recognition of Marczinski.

Marczinski has spent time with undergraduate students conducting research on the effects of mixing alcohol with energy drinks.

This fall Chase Law will be launching a new program, called 3+3, and creating a Master of Legal Studies program.

3+3 will allow high-performing undergraduate students to earn both a bachelor’s degree and a law degree in just six years, according to Mearns.

“Students who participate in this program will save tuition, and they will be able to begin their legal careers a year sooner,” Mearns said.

The Master of Legal Studies program will not allow students to sit for the bar and practice law, but will allow them to work in industries that require a thorough understanding of the American legal system, such as human resources, health care administration or finance, Mearns explained.

Announced in the spring and becoming official effective July 1, in their fourth and final year of transition to Division I, NKU is now a member of the Horizon League.

“This transition to a new conference will be beneficial in many ways,” Mearns said. “Our fans will be able to travel to many more away games. And the shorter travel distances will reduce expenses.”

Mearns said that the Horizon League will be a more competitive conference, which will help to push student-athletes and coaches harder to “continue our long tradition of athletic achievement.”

For the first time since 2003, Kentucky’s Governor’s Scholars Program will return to NKU.

The program is a six-week summer residential program which allows high school students from the state to go through six weeks of classes leading up to their senior year of high school, and opening the opportunity for scholarships to state universities.

“It is an honor to be selected as a host institution once again for this important program,” Mearns said. “It is a testament to the work all of you are doing. It is also a wonderful opportunity to show many of the best and brightest in the Commonwealth what our University and this region have to offer.”

Recognized during the speech were to new Board of Regents members, Kat Hahnel, Richard Boyce and Arnie Slaughter.

Hahnel was elected to the Board by students in the 2014 Student Government Association, which also places her as president of SGA. Boyce was elected by faculty peers and Slaughter was elected by staff.

Mearns announced that Northern Kentucky University: A Panoramic Photographic History will be released this fall.

“The book showcases the evolution of our University – the history, the events, and the people that have been integral in our transformation,” Mearns said. “This book also memorializes the contributions of the men and women who work so hard every day to make our campus beautiful.”

Mearns said that the book is a culmination of archival photos and colorful photos taken by Tom Schiff.

In honoring those who have made a lasting impact on the university, Mearns took an opportunity to honor the memory of a former professor in the journalism department, Mary Cupito.

“Simply put, Mary was beloved by her colleagues and by her students. After battling cancer for several years, Mary passed away in February,” Mearns said.

He then went on to cite an article written by former Copy Editor Richard Cracchiolo and one of Cupito’s students. In the article, Cracchiolo discusses the strong impact Cupito had on his writing career discussing that he may not have gotten into the field if it hadn’t been for the words of Cupito.

“Every week, I hear another inspirational story about one of our students or one of our graduates – a story about how their passion, about how their commitment to service, is having a lasting impact on our community, on our Commonwealth, and on our country,” Mearns said. “And at the foundation of each one of those stories is a similar testimonial to the commitment of our faculty and staff.”