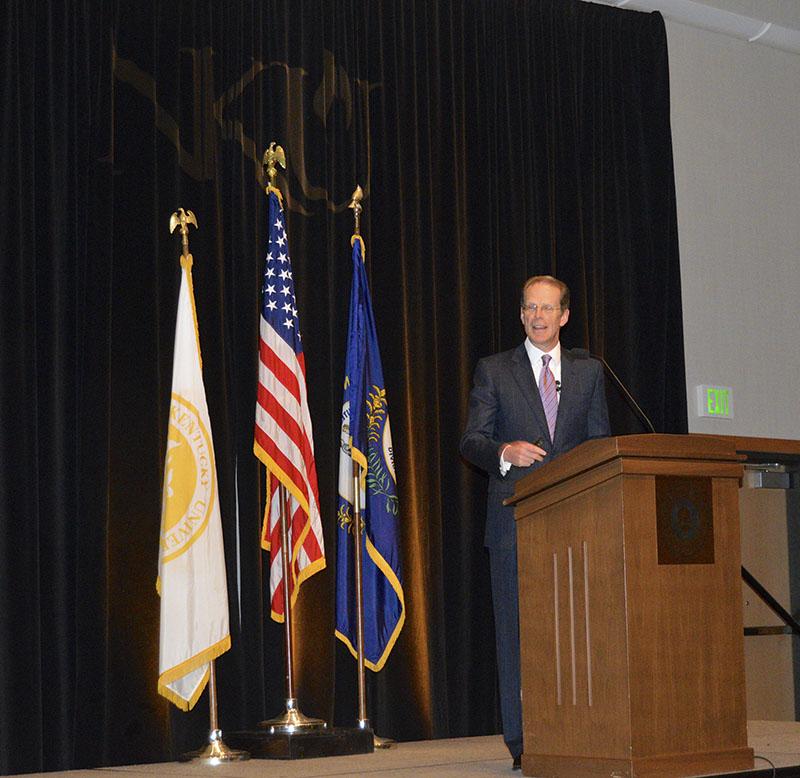 Enrollment, retention and state appropriations were among the topics highlighted by President Geoffrey Mearns in his annual university budget address on Wednesday, April 29.

The purpose of the address, according to Mearns, was to provide information about the variety of factors that influence the financial and budget challenges and to share the tactics that he will be recommending to the Board of Regents to ensure that the university maintains a balanced budget.

Mearns says those declines are consistent with national averages and that the university is exercising discipline in terms of enrollment and admissions practices to ensure the success of prospective students.

“We could rectify or smooth out some of those trends if we retreated from that discipline but I think we all collectively feel that that discipline in terms of admission standards is very important for the long term future prospects of our institution,” Mearns said.

Mearns says that for every 100 students that the university does not enroll it is equivalent to a loss of approximately $1 million in tuition revenue.

“One of the contributing factors to the stagnant undergraduate enrollment is the fact that we have not yet been able to materially improve our freshman to sophomore retention rates,” Mearns said.

NKU’s retention rate is similar in comparison to peer institutions with similar demographics and Mearns says the university has a reason to be optimistic.

“With the strategies that we have in place, and with continued focus on those strategies, that we can improve that 69 percent,” Mearns said. “That is an important thing to do, not only because it will serve our students well, but because it will continue to improve the financial health of the university.”

According to Mearns, there is substantial inconsistency in the funding among institutions in the Commonwealth.

Mearns said state appropriations have declined over the last ten years. In 2002, NKU received about $5,700 a student. Now that funding has dropped to about $4,100 a student.

“That’s a decrease in $1,600 in constant, inflation-adjusted dollars over that ten to twelve year period, which is more than a 25 percent reduction in state support,” Mearns says.

Mearns says that raising tuition rates to compensate for the lack of state funding is not an option.

“I don’t think it would be prudent to increase tuition more dramatically,” Mearns said. “It would have an adverse impact in terms of our market competitiveness, and we also know that our students and their families are facing significant financial challenges.”

Student Regent John Jose says that when he decided to attend NKU he was not aware that he would be underfunded in comparison to other universities in the state.

Jose said that during his student government presidency, he has collaborated with the Board of Student Body Presidents to push for lower education costs, and to fight for outcomes-based funding.

“Looking forward, student government is going to be a much bigger force,” Jose said. “We’re going to let our legislators know that, ‘Hey we’re NKU students, we’re from different parts of the Commonwealth, and how are we underfunded compared to if we would have went to another university?’”