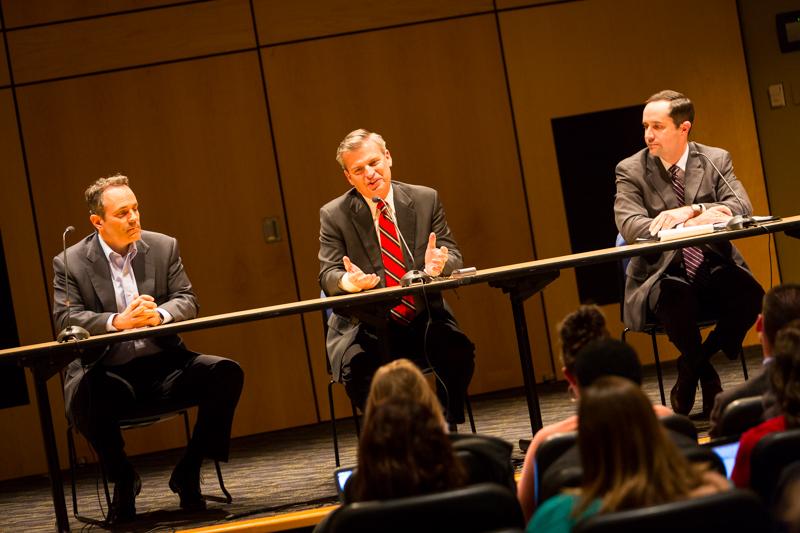 During NKU’s gubernatorial debate on April 22, the Kentucky candidates for this year’s Republican primary grew irritable with one another.

Roughly 60 people were in attendance for the debate, half of which were students. The debate, which featured three of the four candidates including Chris McDaniel,the lieutenant governor nominee to James Comer, Hal Heiner and Matt Bevin, was held in the University Center’s Otto M. Budig theatre.

Throughout the hour-long debate, topics ranged from student debt to coal but as each candidate answered the tension become more apparent.

When asked about outcome based funding for Kentucky universities, McDaniel began his answer by taking a jab at fellow candidate Bevin.

“Once again you heard all of us call for outcomes-based funding, so maybe this will be just a two-minute answer on whatever we want to talk about,” said McDaniel with a chuckle.

It didn’t take long for Bevin to interrupt.

“It would be so easy for me to make a smart remark to that,” Bevin said.

The back and forth manner didn’t end there. During the last question before their closing statements, the candidates were asked about making the lawmakers’ pension system more transparent and whether they themselves would deny their pensions.

“I will lead the charge to ensure that going forward, publicly elected officials in the state of Kentucky do not get a pension,” Bevin said. “There should be no pension for people who want to serve the public. Enriching yourself at the expense of the taxpayers is not what you send us to Frankfort to do.”

McDaniel directly responded to Bevin’s statements claiming he too will not take a pension. He also stated that Bevin was mistaken for his earlier remarks about how much of NKU’s annual budget went into Kentucky’s pension fund.

“I have a correct amount on a couple of pension things that [Bevin] said tonight, mainly in which he said that 39 percent of this school’s budget goes to KERS (Kentucky Employees Retirement System),” McDaniel said. “I know he didn’t mean to misspeak, but frankly he is wrong with that. It is 39 percent contribution rate, not 39 percent of the overall budget.”

Bevin tried to reply to these statements, but was not allowed a rebuttal.

Despite the tension, all three candidates were in agreement on the majority of the topics. Each said they would deny a pension, do away with Common Core educational standards, and continue to support coal production by fighting mandates from EPA and other agencies.

Heiner equated Common Core standards to the latest push from a bully.

“What does a bully do when they push and somebody steps back? They just step forward and push again,” Heiner said. “Right now the federal government says that they will pay for your testing under Common Core. ‘You know we will help you out financially,’ but what I fear is that ultimately the federal government wants to control education throughout the U.S.”

“I was one of the only students that I saw that was vocal and getting involved in campaigns. When I talked to other students on why they didn’t, it was a simple answer that they didn’t know who was running or they didn’t know how to get involved,”  Hahnel said. “That’s when I decided why not have them come to us. We are the voters. We are young and the future of Kentucky, so why not spark a conversation directly with them about our issues.”

Matt Spencer, sophomore music major, attended the debate in hopes of hearing how each candidate would contribute to higher education if elected.

“I wanted to hear what they would do about such issues as bringing funding to schools, like NKU because it is a great school. I just wish that people would realize that because we deserve to be put on the map,” Spencer said.

The Kentucky Republican primary will be May 19. The winner will likely face Democrat Jack Conway, during the general election on Nov. 3.