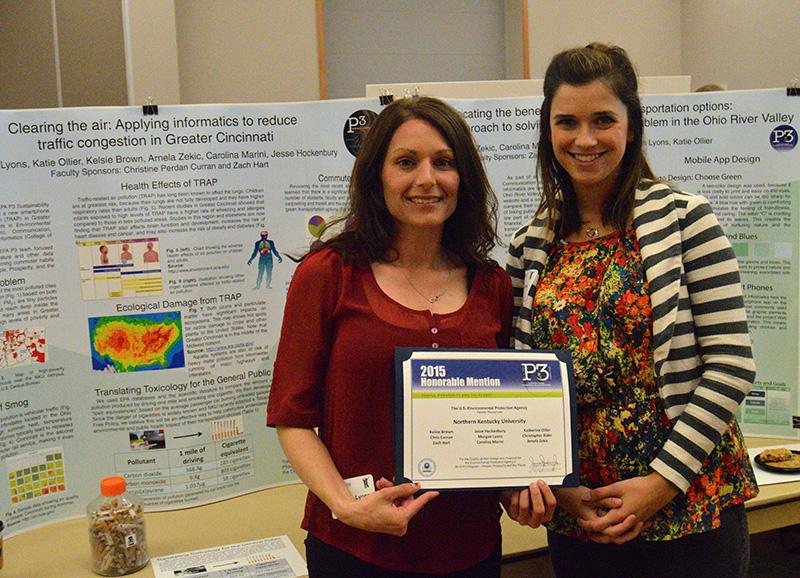 Morgan Lyons and Arnela Zekic hold their honorable mention award in front of their poster presentation at Celebration on April 15.

Students from environmental science, communication studies, public relations and media informatics collaborated on a project that shares one common goal: to clean up the carbon emissions of the NKU community.

The interdisciplinary project, Clearing the Air: APPlying Informatics to Reduce Traffic Congestion in Greater Cincinnati, focuses on the responsibility the NKU community has to the environment.

According to Morgan Lyons, an environmental science major, approximately 85 percent of NKU students commute to campus.

“The overview of the problem really is we live in a tri-state area that includes Kentucky, Ohio and Indiana,” Lyons said. “That is our NKU population, but there’s no public transportation available for that connection from Indiana to Kentucky or Ohio to Kentucky. TANK obviously only services a small part of the Northern Kentucky area.”

To encourage the use of public transportation, the students created a mobile app that allows users to track the amount of toxins they are responsible for releasing into the atmosphere.

Lyons explained that the environmental science team investigated how air pollution affects health, particularly in children and the elderly. Lyons said that toxins take a toll on the developing lungs of children.

In addition to examining health effects, Lyons said her team also looked at ecological and environmental impact, such as Cincinnati’s smog pollution.

“When you can’t see our city on certain days, that’s all from the traffic related air pollution due to all of the commuters,” Lyons said.

Dr. Zachary Hart, chair of the NKU Department of Communication and advisor of the interdisciplinary project, said that a survey directed toward commuter students indicated that over half of the students were interested in alternative transportation methods.

“There was a real openness to it,” Dr. Hart said. “But then when you look at actual practice at what people are doing, it’s actually a very small number that actually use those alternative modes of transportation.”

Modeled after other green universities, such as EKU who has developed their own carpool system, Zekic and her team created a way to make college students realize that air pollution is a problem.

“We were trying to figure out what we can do, and we were looking at all of the data to see how we could actually show this to people,” Zekic said. “Because with air pollution, it’s out of sight, it’s out of mind. You don’t see it, so why should you care about it?”

Zekic explained that, according to persuasion theory of communication, a subject must be given an incentive in order for their behavior to change.

According to Zekic, the team developed incentives relatable to college students such as saving money, promoting fitness and contributing to a green environment.

Kelsie Brown, a public relations major, says that of the three components, NKU students are most concerned with the cost of their commute.

“NKU students can use their student ID to ride any TANK in the Northern Kentucky area, so moving forward into the next phase of this app and implementation, we know that we kind of want to play up the economic side of that,” Brown said.

Jesse Hockenbury, Mobile Applications Developer for the Center of Applied Informatics, is working on developing the app.

Hockenbury says that the app will act as a daily trip planner, allowing users to not only schedule trips, but it also shows users how their trips and the method of transportation they are using reflect positively on the environment.

“We’re hoping that if students can see all the impact, especially the financial impact of taking the bus, that they will really think twice before getting into their car,” Hockenbury said.

Brown says that this project has an impact on not only current students but also prospective students. The team has partnered with the Kenton County School District, particularly Dixie Heights High School.

“A lot of those graduating seniors end up coming to NKU,” Brown said. “We think that if we can target these students at the high school age, when they come to Northern they already have the idea that this is a culture where we commute, and we carpool with each other and we take public transportation. We want to try to internally change the culture of NKU.”

The team won an honorable mention at the EPA P3 (People, Prosperity, Planet) Sustainability Expo in Washington D.C. on April 11-12.