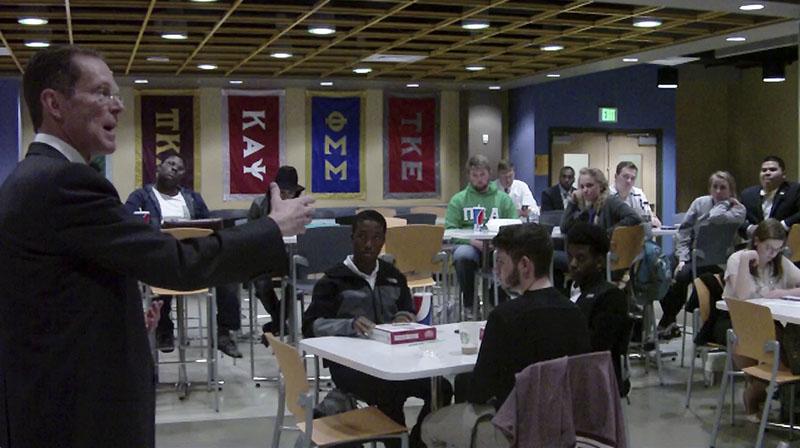 President Geoffrey Mearns announced he will not continue to pursue the idea of Centers Inc. managing the Rec Center during a town hall forum hosted by SGA Monday.

Matt Hackett, Rec Center director, and Jeffrey Waple, the dean of students, were notified of the decision just moments before Mearns broke the news to students.

“About 45 minutes ago I spoke with Matt Hackett and Jeffrey Waple and advised that based on info presented to me I decided that I was not going to continue to pursue the possibility of having a contract with Centers Inc.,” Mearns said. “Instead we’re going to continue the rec management as it currently is.”

Mearns said he wanted to make sure students know how much of an investment they make annually towards the Rec Center.

“The purpose of the request for proposal (RFP) process from the outset was to ensure that you [students] were getting the best return on that 6 million dollars, [that students annually invest in the rec center]” Mearns said.

Today’s announcement came after Mearns’ decision that he needed an additional two to three weeks to make a final decision after the RFP committee made their recommendations to Mearns, according to SGA Vice President Kat Hahnel.

SGA Senator Kristian Johnson, the facilitator of the forum and a member of the RFP committee, said he was nervous to find out about Mearns’ decision, but was thrilled to learn that rec center management will remain the same.

“I was very very relieved to find out that the rec center was not going to get outsourced,” Johnson said. “I’m glad it was in our favor and this just goes to show how important culture is to NKU.”

Vice President Kat Hahnel said Mearns’ decision to not outsource the Rec Center was a victory for students.

“Heck yeah, we did it! Some people don’t think students have a voice but this shows that the administration does listen to us,” Hahnel said. “If we make enough of a fuss eventually they will listen.”

Mearns said that student campaigning, #SaveOurRec campaign, and student petitioning demonstrated student care but that his decision was based on the facts and information he had been given from two reports from the advising committees.

“We can’t make decisions based on letter writing campaigns and social media campaigns,” Mearns said. “I made the decision based on information from the two reports.”

Mearns also discussed the timeline for the new health innovations center at the town hall forum.

“We now have a pretty clear sense of what the building will look like from the outside,” Mearns said. [This project] also includes the complete renovation of Founders Hall.”

Students can expect the construction of the new health innovations center to begin by the end of 2017 and renovations of Founders Hall and the completed construction to be finished by the spring of 2018.

“Late summer or fall we should have more specific plans,” Mearns said. “Groundbreaking may start this summer.”