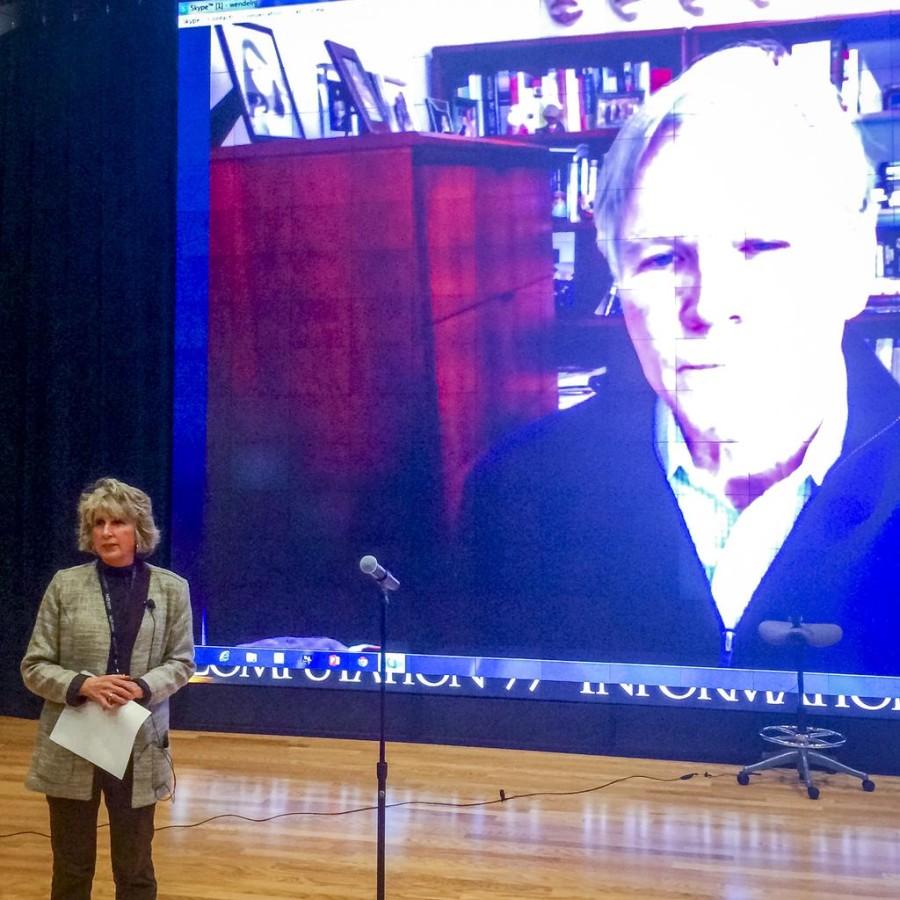 Michele Day, NKU professor and Northerner Advisor, leads the discussion with Bill Keller. Keller is the former editor of the New York Times.

At the Democracy Square Live on March 18, former New York Times executive editor, Bill Keller, who recently took over The Marshall Project, skyped into NKU’s George and Ellen Rieveschl Digitorium to hold an engaging conversation with students and faculty about The Marshall Project and the criminal justice system.

What is The Marshall Project?

Neil Barsky, a former reporter at The Wall Street Journal, founded The Marshall Project in 2014 and asked Bill Keller to be the paper’s first editor-in-chief.

“I was particularly interested because his focus was on the criminal justice system, which is first off a mess in the United States,” Keller said.

Keller said there is hardly any coverage of the prison systems and how they work.  Most people do not know how prison systems work and what happens to people post-prison life.

They cover topics ranging from drugs, to truancy, to innocent people in prison, to hard-to-talk-about issues such as why the FBI is made up of mostly white people and the frequency of rape in prison.

Makiyah Jackson is a freshman journalism major whose interest was sparked when Keller discussed a piece The Marshall Project did on truancy.

“I thought Bill was really inspiring because my major is journalism and what The Marshall Project is, is really interesting because I’ve dealt with truancy and how people can get kicked out of school for missing [school], so I really like what it stands for,” Jackson said.

From The New York Times to The Marshall Project

After 30 years with The New York Times, Keller left in March 2014 to take over as editor-in-chief at The Marshall Project.

“I can tell you with complete honesty that it’s been a little over a year since I left The New York Times and I haven’t had one day that I’ve woke up and wished I was back there,” Keller said.

He feels that this past year has sparked much interest in criminal justice issues stemming from issues such as Ferguson.

“It doesn’t get repetitive, I find that the people who are interested in these issues are really interesting and thoughtful, and passionate people,” Keller said.

One of the biggest differences from the The Marshall Project to other journalism outlets is that, not only do they look to post articles online or social media, but also look to partner with other more established media outlets to “amplify their voice,” Keller said.  They reach a larger audience this way.

Keller said that he has a great group of driven journalists who are curious to dig for more information.  They observe prisons, mental hospitals for the criminally insane, and cover all kinds of topics.

The New York Times has a staff of around 1,250.  At The Marshall Project the number of staff is in the mid-20’s.

“I can talk to basically everybody that works here everyday,” Keller said.

“He was actually really interesting and I can’t believe he would leave The New York Times to do a startup project,” she said.  “I think The Marshall Project is a really good thing because there are so many issues out there that need to be covered and they are doing a good job covering it.”

An Agent of Change

“We mostly strive to be fact-based rather than opinion-based and to be fair minded in how you present the information,” Keller said.

The Marshall Project focuses on accountability journalism and looks at the good aspects and consequences of public institutions.

“We are creating a groundwork for prosecutors, lawmakers, the governor, the people who want to follow up on this and see if they can make things right,” Keller said.

The main audience for the paper consists of these people.

Keller also gave advice for criminal justice and law students in the audience.

“You are going to see a lot of things that will make you hard and cynical. I encourage you to your best to fight that because the system is only as good as the people who staff it,” he said.

See more of what The Marshall Project does at their website: https://www.themarshallproject.org