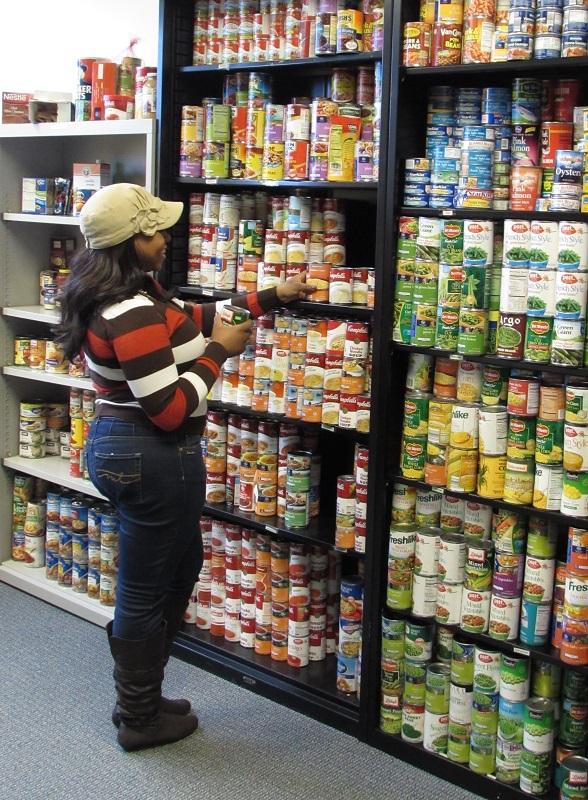 Volunteers have responded to the rise in food insecurity among students by giving out food at NKU’s on-campus food pantry.

“When you think about college students, you think we’re already privileged to some extent just to be here on campus,” NKU Social Work Professor Jessica Taylor said. However, that’s not necessarily the case.

According to the United States Department of Agriculture, food security means “access by all people at all times to enough food for an active, healthy lifestyle.”

NKU’s rate of food insecurity among students is comparable to the national average for college students, which is around 15 percent, according to Taylor.  That means about 15 percent of NKU students do not have access to affordable, nutritious food when they need it.

There are several factors that have led to an increase in students experiencing food insecurity.  Tuition rates and other school-related expenses have gone up significantly in recent years.  In addition, colleges have also been offering more scholarships to low-income, often first-generation college students.

In response to this problem NKU, and a growing number of other colleges around America, have been opening food pantries on campus to provide food for students in need.

NKU’s food pantry is called FUEL, which stands for “Feeding the University and Enriching Lives.”  The idea for the food pantry came about in the fall of 2013.  In one of her social work classes, Jessica Taylor noticed something was wrong with one of her students.

“One of my really outgoing, bright, engaged students just totally checked out on me,” Taylor said.

After a few weeks, Taylor met with the student and found out that she had been losing focus and skipping class because she was hungry, so Taylor started keeping food in her office for the student.

“I just wondered if that one student wasn’t willing to come to me up-front, how many other students are hungry?” Taylor said.

After speaking with other professors, she discovered that many other teachers were also keeping food in their offices for students.

The word spread quickly. What started as one shelf of food for one student in the fall became two big cabinets for five to ten students by spring.  By the fall of 2014, the University had provided a dedicated space in Founders Hall for a food pantry.

FUEL is run completely by volunteers and provides non-perishable food and toiletries, all of which are donated, to students who need them.

“I’m a student, I struggle, so being able to help other students that struggle I think is the biggest reward,” Kezia Slaughter, a  FUEL volunteer and senior social work major, said.

In the first five weeks of this semester, the number of students served has already surpassed that of last semester, according to Slaughter.

According to Mary Zupan, senior social work student and F.U.E.L. NKU volunteer, any NKU student who needs food can use the food pantry.

“If they have an NKU I.D., that’s all they need to access [FUEL’s] services.  As long as they attend this school, we don’t require anything else,” Zupan said.

The food pantry is located in Founders Hall room 330 and is open Mondays and Thursdays 10 a.m. to 2 p.m.  Their email is FUEL@nku.edu.