Four questions you might have about the recent measles outbreak 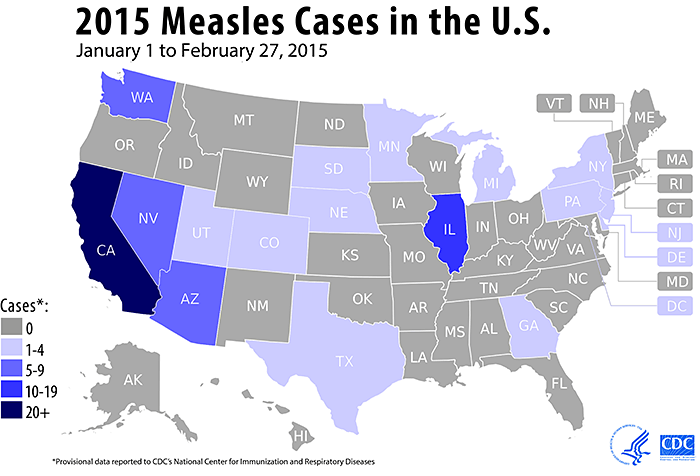 Map provided by the Center for Disease Control and Prevention.

A map showing the number of measles cases by state. The color distinctions signify the amount of cases in each state.

In December 2014, a measles outbreak linked to the California amusement park Disneyland, began to spread to multiple states.

The measles is a infectious and contagious viral disease that can affect people of all ages.

The recent outbreak is still spreading across the United States, so the Northerner decided to seek more information about the virus and what NKU would do if the virus were to come to campus.

1)  What are the symptoms of the Measles?

According to the Centers for Disease Control and Prevention (CDC) website, those who contract the measles virus typically begin to see symptoms seven to 14 days after contracting the virus.

“In the first few days, those with the virus see symptoms such as high fever, cough, runny nose and red eyes,” Rose Tempel, associate director and nurse practitioner for the Health, Wellness and Counseling Center, said. “Within the first few days of experiencing symptoms, most people think that they just have a cold because the symptoms are so similar.”

According to Tempel, three to five days after experiencing symptoms for the first time, a rash breaks out. It is then, that most people realize that they have the measles.

The rash typically begins on the face at the hairline and spreads down to the neck, arms, legs, feet and trunk, according to the CDC website. When the rash appears, the patients fever can potentially spike to more than 104 degrees Fahrenheit, which can be dangerous.

Because the measles is a virus, if contracted, the virus must be left to run its course. So, after a few days, the fever subsides and the rash fades away.

According to Tempel, there are some serious complications that can occur such as ear infections resulting in hearing loss, pneumonia and encephalitis (swelling of the brain.)

“Serious complications aren’t very common but they can happen,” Tempel said. “Usually small children, people with compromised immune systems and those who have not been vaccinated are most at risk for these complications.” 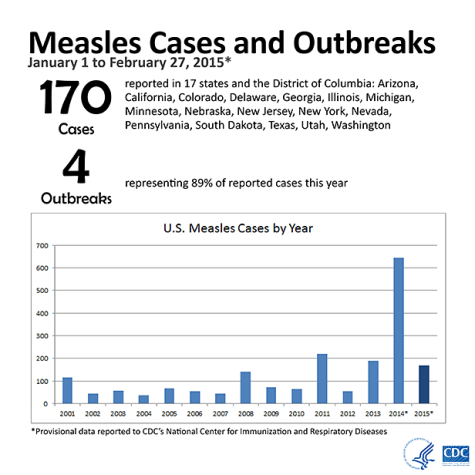 2) How is the virus spread?

According to Mike Scola, a Biological Sciences Instructor, the measles is highly contagious and is spread when someone coughs or sneezes, which allows others to easily come into contact with the virus.

“If somebody shows up to class with it, just in that classroom, about 90 percent of the people in that classroom will become exposed to it,” Scola says. “And many of them, if not most of them would come down with it if they aren’t protected.”

Because it is so easy for others to come into contact with the virus, the virus can spread rapidly across an area.

According to the CDC, 170 cases of the virus were reported across the United States between the first of January and February 27, and is continuing to spread.

3) What can I do to protect myself from the virus?

To prevent the virus from spreading, the measles, mumps and rubella vaccination was created in 1963 and is 97 percent effective in preventing the measles, according to the CDC.

The vaccination, is given in two doses at least 28 days apart and is still recommended. Children can receive the first dose of the vaccine at 12 months of age and typically receive the second vaccine when they are 4 to 6 years old.

Both Scola and Tempel recommend that everyone becomes aware of whether or not they have had the vaccine so that they can take proper steps to protect themselves either way.

Tempel also thinks that it is very important for females wishing to get pregnant to get the vaccine because once you are pregnant the shot is not available and you are more at risk for complications.

According to Scola, there are a number of reasons that people may not get themselves or their children vaccinated.

“There could be a number of reasons people don’t get vaccinated,” Scola said. “One is that they just simply forgot. They didn’t go back to the doctor to get the second shot and forgot to do it after that. It may also be that they have beliefs that they don’t want anything put in their body.”

Another reason a lot of people may not be getting vaccinated according to Scola, is because of the belief and fear that the measles, mumps and rubella shot is linked to Autism.

“They have not been able to find a link to it, but there’s still that perception and belief out there,” Scola said. “I’m very in tune and connected with that theory because I have a nephew with autism.”

4) What does NKU do to protect students from contracting the virus?

According to Tempel, NKU does not require students to have the vaccination before attending school but the Health, Wellness and Counseling Center offers the measles, mumps and rubella shot to anyone wishing to get vaccinated.

“I have never seen a measles case in person,” Tempel said. “But that is not to say it won’t happen or that it could never come to our area. I think it is very important to become aware and stay informed about the measles.”

“We follow the child care licensing regulations and the Kentucky Health Department regulations,” Caldwell said. “At this time, we only have one child who has a medical exemption, but all the other children have current immunizations.”

Based on NKU’s communicable disease protocol, the measles is a reportable disease, so if a student, staff or faculty member were to be diagnosed with the virus, the health department would be notified and a plan to keep the virus contained would begin.

While Kentucky, Ohio and Indiana have not had any confirmed cases of the Measles so far, Scola believes that it is quite possible that it could make it’s way to the region at some point, so it is very important to stay up to date and informed.