Faculty and students cope with aftermath of snow days 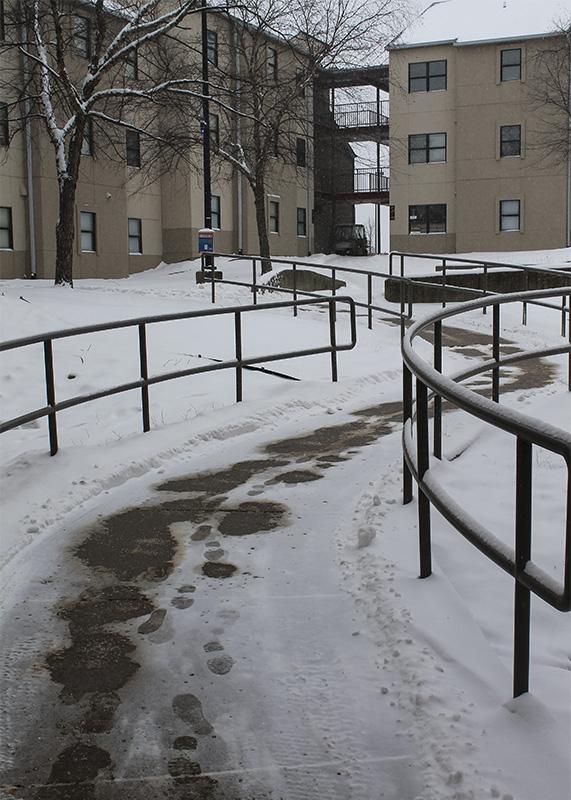 CMA salt was used to clear of the sidewalks in the residential village as snow took over campus. NKU was closed Monday, Feb. 16 due to inclement weather.

Faculty and students are back at NKU this week after the university took nearly a week off due to inclement weather. The snow days, however, have taken a toll on professors and their classes after a week of missed work.

Richard Wagar, an electronic media and broadcasting professor at NKU, has dealt with a few setbacks due to the snow days in his broadcast programming course.

“All we are really doing is compressing the lecture a little bit, and moved a quiz,” Wagar said. “I had an in-class exercise scheduled for the first part of midterm week and that may move to after midterms.”

Communications Department Chair Zachary Hart is aware that some students are concerned professors will try and cram two weeks of class work into one week.

“It really depends on the individual teacher and the class obviously and how it is structured,” Hart said.

Some instructors found other means to deliver class material when classes were cancelled.

Some faculty are using tools such as Tegrity lectures to post online, said Hart.

“The faculty is [are] trying to deliver some content through Blackboard that they may have done through the classroom,” Hart said.

Hart explained that many instructors teach five week courses in the summer and are used to condensing assignments, making the snow days easier to deal with.

However, not all classes can post lectures and homework online. It largely depends on the nature of the course. Hart explained the College of Informatics holds many courses that are hands-on, which makes it difficult to make up these classes.

Students, along with faculty, dealt with the effects of the snow days two weeks ago. Alex Ducker, a junior nursing major at NKU, was one of many students affected by last week’s snow days.

“I had two tests the week of the snow days and now I have three tests and two group projects due all in the same week,” Ducker said.“It is very stressful, especially with the amount of work in the nursing program.”
Other students have to make up the missed work on their own.

“It’s affected my classes. One of my classes is eliminating a paper from the syllabus,” Ellen Wappner, a junior electronic media and broadcasting major said. “My other three professors are keeping to the schedule and having the class make up for the work on our own.”

With spring just around the corner, snow and frigid temperatures still lie in the forecast ahead. According to the Weather Channel’s prediction, the Northern Kentucky area should expect snow and freezing rain on March 3 and 4, meaning school cancellations are still a possibility.