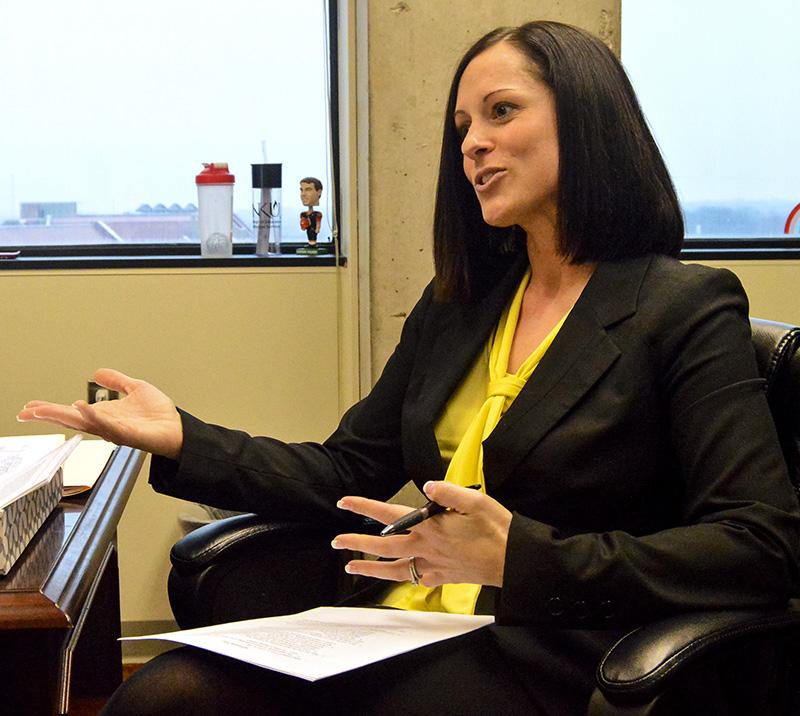 Kelly Martin recently joined the NKU team as the Assistant Vice President of Marketing and Communications. Martin has a vision for rebranding NKU and creating a new way that NKU will advertise and market itself.

Kelly Martin is hungry for change at Northern Kentucky University. She recently joined the NKU team as the Assistant Vice President of Marketing and Communications with an exciting vision for rebranding NKU and creating a new way that NKU will advertise and market who we are as a university.

Martin and her marketing team have been working hard to reach some specific goals by the end of 2015.

Martin has been giving a presentation to faculty and students around campus explaining her plan. She created a timeline of specific goals she would like the university to reach for the marketing campaign during the 2015 year.   According to Martin’s presentation, the main goal for February was to introduce new visual and verbal identity guidelines.  During the months of February to April, Martin hopes to start incorporating some of the new visual and verbal identities and debut the spring advertising campaign.  By the end of 2015 Martin wants all faculty and staff to go through the “promise experience.” She also hopes that all creative materials are updated with the new design standards.

On Feb. 6, a new website launched [http://brand.nku.edu/brand.html], where students and faculty alike can go to learn more about how they can better display the brand. It includes logos to use, headers, a design request, images to use in presentations, and more.

Jim Nilson, Director of Digital Marketing and Web Communications at NKU, has been working with Martin and has seen what she has been doing over the past few months.

“Kelly has done a great job. It feels like she has done double the work in half the time. Part of her work has been the discovery,  planning, and the implementation of the new brand,” Nilson said. “The other part is educating the campus on advertising, branding, marketing, and effective communication.”

According to an article posted on Forbes website by Roger Dooley, there are 4,000 colleges in the United States for students to choose from.  According to Dooley, to build a brand, it takes an entire institution to build it and every person [faculty and students in this case] to implement and live up to the brand.

Martin and her team have a specific strategy for rebranding NKU.

“We are changing a mindset,” Martin said.

The marketing department is currently being restructured. Certain faculty are going to be assigned to different colleges in the university to help those colleges solve problems to market them better.

When Martin first came to NKU she asked many questions including how much of the budget was being used on digital advertising and the answer was a surprising none. According to Martin, the marketing department is bringing some experienced partners in to help with their marketing and digital strategy. They will be moving to digital advertising and looking to advertise on things such as search engines, digital display marketing, etc.

The Long Road Ahead

Martin has noticed some people at NKU saying things such as we should do what this university is doing but she strongly feels that NKU can always do better in comparison to other universities.

“It is everything we are doing today to articulate saying what we do in a distinct and united way will impact everything, it will hopefully impact awareness, perception, enrollment, pride in our school, alumni engagement, donations in the future,” Martin said.

The rebranding process is not going to happen overnight though Martin explained that it is time consuming to go around to the different colleges, departments, and organizations at NKU and explain the strategy and to help people understand it, not just hear about it.

“This is an evolution,” Martin said.

She and her team want to make sure everyone is on the same page in portraying NKU.

How Can Students Get Involved in the Rebranding Process?

Martin wants to make sure students are a part of this process. She and her team are working with Student Affairs to set up a focus group of students to discuss their ideas and give their input.

As an experienced marketer, Martin is aware that consumers will jump to social media to post about a bad experience, they may have with a company, in this case though, the university.

“It is up to all of our stakeholders not only our students to tell the stories we want people to hear and remember,” Martin said. “It is important to not only say what we do but to do what we say and part of that is how we talk about our university, how we portray ourselves on social media and face to face conversations.”

Martin explains students should use the blink test. If you are creating a flyer or a t shirt representing NKU, blink and when you open your eyes, you want to able to instantly think NKU. Martin and her team are very open to student questions and helping students being able to portray the brand as best as they can. Martin made clear that she or her team do not want to stifle student creativity at all but want students to be creative while respecting the identity of NKU.

Martin wants to unveil the hard work of their marketing campaign in the 50th anniversary of NKU.

“I want people in Cincinnati, in Northern Kentucky and quite frankly throughout the Commonwealth to say ‘Woah! Where did that come from?’,” Martin said. “I want them to think ‘Oh my gosh where have they been? What’s going on at NKU?’ I want them to sit up and take notice in a way they have not before.”