Callahan Bistro to close for renovations 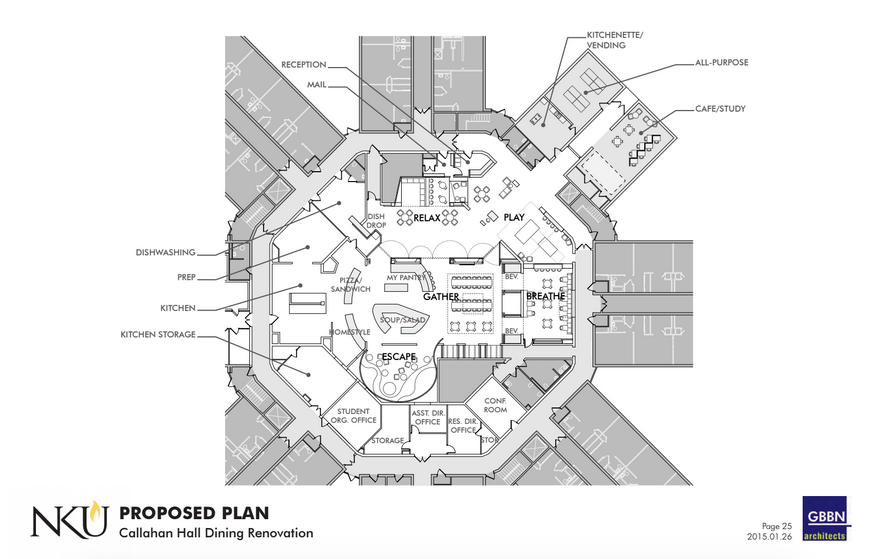 The proposed design for the Callahan Bistro features five themes-- play, relax, breathe, gather and escape. The design is conceptual and subject to change.

The Callahan Bistro will close March 6 for a renovation process that will mirror the construction process at Norse Commons last spring.

NKU has hired GBBN Architects, the same firm that designed Norse Commons, to turn the Bistro into a more attractive dining space than when the university first renovated it in 2008, according to University Architect Steve Nienaber.

“There’s things that we couldn’t afford to replace when we renovated Callahan to make it so we could occupy it several years ago. We just didn’t have the budget to do that then,” Nienaber said. “Especially now with Norse Commons and the addition of demand, we’re trying to make it a place to go.”

The $2.5 million project will require the Bistro to be closed from spring break to mid-August.

Nienaber said construction following spring break will happen during designated hours and should not impact students living in Callahan Hall.

“There might be some limited demolition but it would be in the kitchen area, so it shouldn’t affect students at all,” Nienaber said. “Anything noisy that would happen would happen during the day and not the night when everyone is sleeping.”

Architects have designed a modern, open layout similar to the one in the newly-renovated Norse Commons, according to Meeks.

“We’re going to take out some walls like we did at Norse Commons, and what we’ll be looking for that’s very similar to Commons is some distinctive features, different sets of seating,” Meeks said.

Traditional seating at long tables, booths, couches, four-tops and even a two-tiered couch will be a part of a unique five-concept design architects have developed, according to Nienaber. Architects have proposed themes for each area of the renovation space– relax, play, escape, gather and breathe.

Distinct features such as a gas fireplace in the escape room, live plants and a waterfall in the breathe room and a pool table in the playroom are all possibilities, according to Dean of Students Jeffrey Waple.

He said many of the food concepts in Norse Commons will be replicated in the new Bistro.

“We’re looking at MyPantry which is breakfast all day and still all-you-can-eat, the soup, salad and dessert bar that’s in Norse right now and sandwich, pizza and homestyle concepts,” Waple said. “The other concepts are going to change a little.”

The renovation project will also renovate the current main entrance of Callahan Hall as well as the front desk, offices and mailboxes.

Architects are also looking to bring more natural-looking light into the Bistro, which has no exterior walls or windows.

“We’ll try to do light layering, so that even though you don’t have natural light, light will change throughout the day,”Nienaber said. “There’s LED lights that are really cool, they’ll allow you to take the spectrum of what natural light does throughout the day and then mimic that and recreate that inside these spaces.”