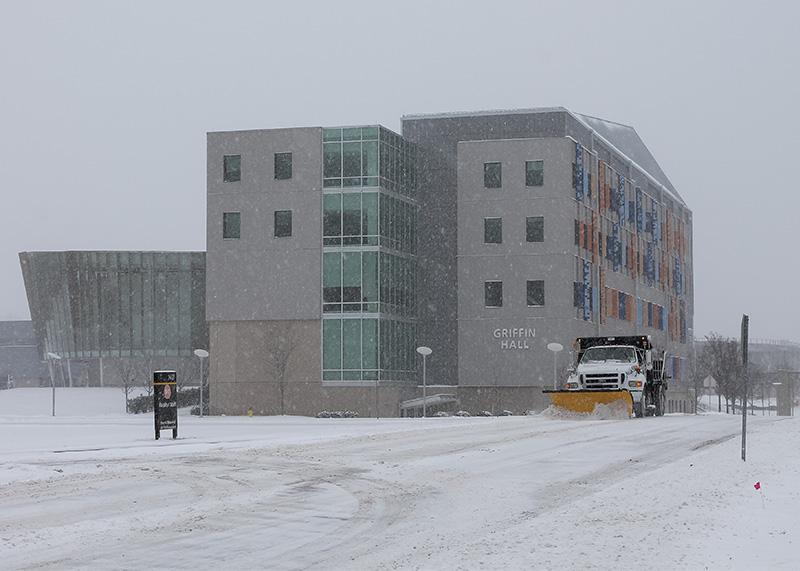 As snow continues to fall across the tri-state, maintenance workers at NKU are working to keep only the necessary roads and sidewalks on campus clear.

“We try to wait until the storm is about passed before we really do the heavy cleanup, so it’ll be sometime tonight and then we’ll do the heavy work tonight in preparation for classes in the morning,” Blake said.

Crews are focusing more of their efforts on plowing and shoveling the snow away as traditional salt is ineffective in below-freezing temperatures.

“Under a certain temperature, like 16 degrees, the salt technically doesn’t work, but we do use CMA [calcium magnesium acetate] so that’s another type besides sodium chloride. It’s similar to the material I believe that they use to de-ice airplanes,”John O’Neil, a turf specialist in the horticulture, roads and grounds department, said.

Maintenance workers are using a combination of shovels, brooms, Gators, Bobcats, snow plows and larger truck with salt bins to combat the snow.

According to campus police, there have been no reported accidents at NKU due to snowy conditions.

“There’s been several accidents around NKU. The reason we don’t have accidents is because everyone is pretty much doing what they’re supposed to, staying indoors, staying put,” Officer Dan Fern said. “Our main concern today is safety and if somebody gets stuck, to help them get back safely.”

Blake said the decision to close the university was made based on the level two snow emergency in Campbell County and the nature of the storm.

“The storm was just starting at 5 a.m. … But the projection was that we were going to get snow all day up to 12 inches,” Blake said. “We didn’t want to bring everyone in and then have them turn right back and go home.”

Late Monday afternoon Gov. Steve Beshear declared a State of Emergency for the Commonwealth so that local officials would have access to state resources to help with public safety and recovery efforts.

In the press release from Gov. Beshear’s office he stated, “This storm system is still dumping snow across much of the state and temperatures are forecast to drop further.  Some areas may see accumulation of up to 16 inches, making it one of the worst storms in recent memory. By declaring a state of emergency now for the entire state, we can deploy any needed state assistance, including National Guard troops if necessary, without delay.”

Campus police advised residents to stay off the roads, dress warmly and not leave campus unless there is an emergency.

Blake believes that if cleanup efforts go as planned the university will be open tomorrow.