Ken Jones named director of new School of the Arts 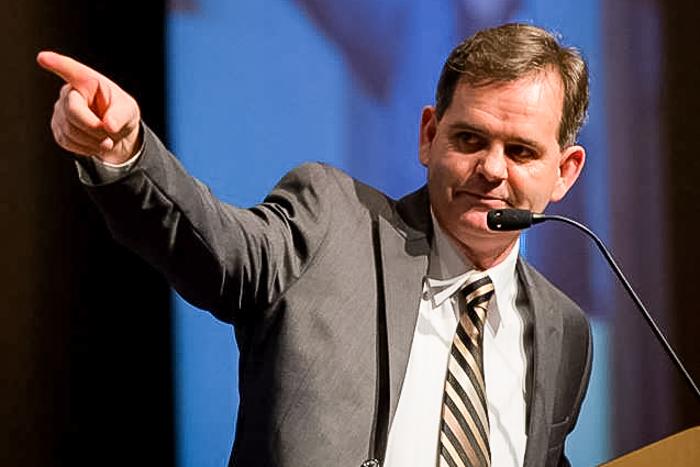 Ken Jones accepting the School of the Arts director position. Jones has worked for Disney and has directed multiple musicals on the NKU mainstage. - See more at: https://www.thenortherner.com/news/2015/02/12/ken-jones-named-director-of-new-school-of-the-arts/#sthash.oTrqrqDH.dpuf

Ken Jones, who has been the chair of the theater and dance department at NKU for 11 years, has recently been named the director of the new School of the Arts, approved by the Board of Regents on last month.

The new school will combine the three departments of visual art, theater and dance, and music in the College of Arts and Sciences and is set to open on July 1, 2015, according to Jones.

Dean of the College of Arts and Sciences Katherine Frank cited Jones’ involvement with the community as one of the biggest reasons for his appointment.

“He has a long history of working very closely with the community and friends of the arts,” Frank said. “This is a way to heighten the visibility of our really outstanding arts program.”

Jones is currently on the boards of trustees for both the Children’s Theatre of Cincinnati and the Contemporary Arts Center and was formerly a member of the board for the Kentucky Humanities Council.

“Community involvement is so important,” Jones said. “And nobody can do it like the arts can.”

Jones said that the community regularly gets involved in the arts at NKU, whether it’s through the music preparatory program, the theater and dance shows, the art galleries or the music concerts. However, he said, it’s important for the arts to be proactive and go out in the community as well.

Over the past several years, Jones said that he has created tour troupes of NKU students that go out into the community and perform shows for over 22,000 pre-school through high school students yearly. He said he hopes to create similar programs with the visual arts and music components of the new School of the Arts.

“I’m so excited about the possibilities,” Jones said. “We have so much potential here…. you combine these three giant entities [the departments] together, and we become a school that will certainly become a powerhouse of fine arts in the Midwest.”

Frank said that she’s excited to see these departments come together and collaborate.

“We have a very, very strong collection of faculty and staff and students, and this restructuring will help them to do more,” Frank said.

Giving an example of the kind of collaboration he would like to see, Jones said, “Somebody might be writing music in the music department, in the composition area, for an original idea they have, and they get theater people to work puppets that are built in the art department.”

“We have different ways to start collaborating that we haven’t had before,” Jones said.