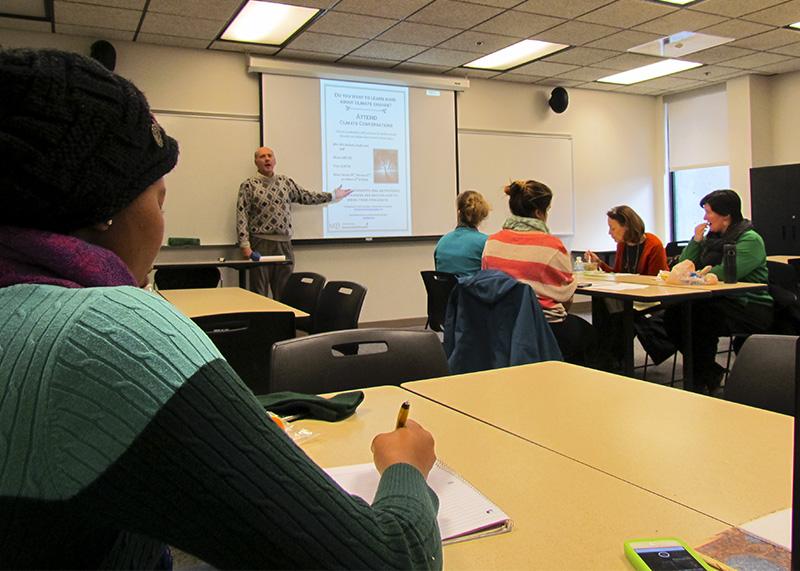 Andrew Long, associate professor of mathematics at NKU, partnered with the Center of Environmental Education to host the forum, which was organized as an open discussion about climate change.

“I just want to have more conversations, I want to hear people talking about climate,” Long said. “And it isn’t happening.”

The forum, which was open to NKU students, staff and faculty, included participants from several university organizations, including the Center for Integrative Natural Science and Mathematics (CINSAM), Campus Planning, Environmentally Concerned Organization of Students (ECOS) and the CEE.

“We heard different people saying different things,” Long said, describing the forum. “We had a large variety of topics.”

The discussion originally focused on issues such as farming, methane gas, melting polar ice caps and the Keystone controversy. “I mean, there’s so many facets to this, that you need to have different voices,” commented Long.

Eventually, students changed the topic of conversation from the global picture to what can be done at NKU. Diamond Hall, sophomore social work major, said she was inspired during the forum to get involved in environmental efforts on campus.

“The biggest thing I got out of this I would have to say is a better understanding of the climate change and how… students on campus, can better climate change. It’s right here… on our own campus,” Hall said.

According to Long, several students voiced that they feel disconnected from the climate conversations because they don’t know about them.

“Students say it’s not on their radar. This should be on the radar, as far as I’m concerned, in a much bigger way,” he said.

One student admitted that as a parent and full-time student, he’s not as concerned about the environment. “Global climate change is the last thing on my mind at the moment,” he said.

“I want to tell those students, this issue is so important,” Long said. “You’ve got to focus here. You’ve got to spend some time now looking at this.”

According to Hall, student organizations such as ECOS could influence change on campus if they find a way to engage students. “It can actually make a difference. I think the problem is just the information is not put out there enough, it’s not broad, it’s not attractive to us,” Hall said. “If climate change was put out there more for us, I think more people would be likely to get involved.”

She added, “Climate change will definitely affect us all of our lives, so I think if we start now, we could make a difference now and later on in life.”

The Climate Conversations series will continue throughout the next three months, with forums on Feb. 27, March 27 and April 22.