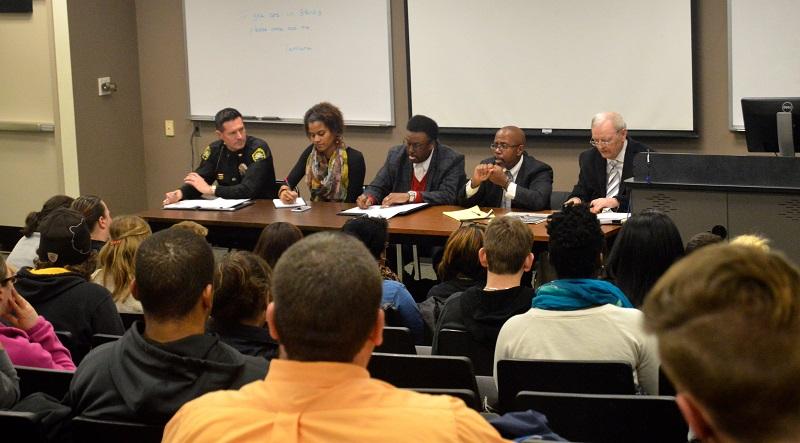 “He’s a good hunter, good shooter, good tactical instructor; but what does this have to do with being a good campus community officer?” Chief Jason Willis asked at the Elephant in the Room discussion held Thursday, Jan. 29.

Students questioned, debated, and deliberated with a panel of NKU faculty staff and NKU Chief of Police over issues surrounding criminal justice and race.

Students sent in a degree of questions via Twitter, asking the panelists what their thoughts were regarding this highly talked about issue.

Chief Willis believes it is time for police to redefine what a good police officer is.

With close media attention of the tragic deaths of three African-American males– Trayvon Martin, Michael Brown, and Eric Garner– a question was raised about the ‘use of force’ used by police officers.

“Are we mad about the use of force policy or are we mad at the police?” asked Dawson-Edwards.

Dawson-Edwards added that the history of the slave code and black code, which is the monitoring of what people of color do, is being passed down from police generation to generation.

Dawson-Edwards said that in 1936, the case of Brown vs. Mississippi, it was discovered that torture was used in the confession of the defendant.

“Up until 1936, it was legal to torture to get a confession,” Dawson-Edwards said, comparing it to the ‘use of force policy.’ “It was legal but that doesn’t mean it’s okay.”

Chief Willis responded that these types of police officers have character flaws and it is not because of their training issues, which can be corrected.

“Problems driving is a training issue,” Willis said. “We had this one officer who kept backing into things, we sent her to back to defense driving school for a week.”

Students laughed in response to the story, lightening the mood of the audience for a few moments.

Willis added that the use of force is determined by the police officer.

“If the officer feels he or she is threatened, then they determine if use of force is an option,” Willis said. “If someone is trying to run you over, then that is a use of force.”

On speaking about the treatment of the bodies of the victims, Willis said they were treated disrespectfully.

“I know police have to gather their evidence,” Willis said. “But leaving a body out on the street for hours? I think we as police are losing the human element of taking care of the body.” 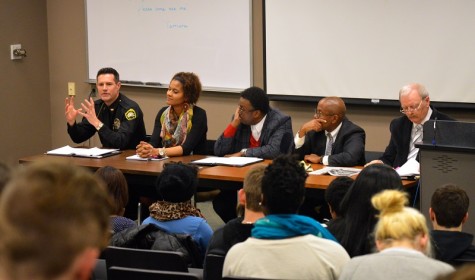 The media was another talking point as students questioned the reliability and validity of its coverage over criminal justice and race issues.

Eric Garner and Michael Brown were at the center of how the media portrayed the suspects, victims, and general coverage.

McClure said that the media focused on the negatives not the positives, as they are ratings generated.

“The negative generates higher ratings,” McClure said. “And a film director couldn’t do a better job at filming it,” McClure said, directing to the chokehold case involving Eric Garner.

Singleton added that news media did not generate riots in certain places, such as Ferguson, but were “designed to inflame.”

An audience member asked the question, “If it were a black officer who shot a white kid, would it have had the same type of coverage?”

Dawson-Edwards responded comparing the types of scenarios and the history tagged with race and criminal justice.

“I believe it would still get the same coverage,” Dawson-Edwards said. “People have to think that if we take race out of the equation then we really see how young these victims were; they were kids.”

Dawson-Edwards added that this issue is so big because of the history of discrimination and police brutality against people of color.

“What was their response?” Jackson said. “What were the views of African-American newspapers on these issues?” 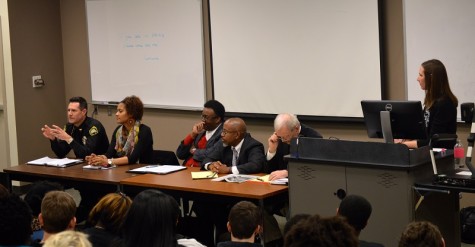 Finding the balance between races can be difficult, but according to Singleton there are other balances that people aren’t talking about.

Singleton said relationships between police officers and the justice system could create uncomfortable feelings, and may be why the courts are more lenient on officers.

“Most officers are going to get a pass unless they are acting unreasonable,” Singleton said. “Courts can be very reluctant to go against police as it could have been a life or death situation.”

Willis quickly added that he tells his officers to put ‘chips in the bank,’ a term he coined himself, in a way to help bridge the social gap between police and members of the community.

What this means is that police officers should talk to community members and engage with the community. ‘Withdraw,’ also coined by Willis, is said to be doing something seen as negative, such as use of force.

“Wherever there is withdraw, just make sure you are putting more chips in the bank than you are withdrawing,” Willis said.

Programs and organizations, such as the NAACP, were questioned as to why communities want inclusiveness but there are groups out there that are still focused on one specific group.

“When we stop needing laws to protect us, then we will then stop needing programs that support us,” Dawson-Edwards said.

Marsha High, history major with a minor in black studies and a concentration in women studies, said that she really enjoyed hearing everyone’s different perspectives.

“I especially loved when Dr. Dawson-Edwards talked about inclusiveness and when the Chief answered that profiling was ok,” High said. “Some of those answers raised questions that we discussed in my race gender and criminology class that Friday.”

McClure ended the discussion with why students, media, and communities need to continue to ask the hard questions and try to discover the truth.

“We are like Plato’s image on the cave wall,” McClure said. “We are only facing the front, slave to the images that are projected by light from the unknown behind us.”