How effective is this season’s flu shot against mutated strand?

The flu has made its presence known this season after a mutated strand began to infect thousands in late December.

The effectiveness of the flu shot each year is determined by the similarity of the flu viruses used in vaccine production, and the flu viruses that are actually circulating at the time. According to the CDC, the most common flu virus this season is H3N2, but the virus has mutated, or “drifted” away from the current H3N2 vaccine.

Campus Nurse Michele Kay encourages staff, students and faculty to get the flu shot this year, even though it currently isn’t as effective in preventing the virus.

Kay believes that some people avoid getting the flu shot each year because they think that they can actually contract the virus from the shot. 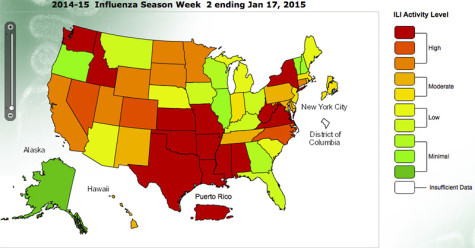 “Some people say ‘well I got the flu shot and then I got the flu’ but that can’t happen,” Kay said. “It’s not a live virus that they give you, it’s a dead form of the virus that helps you create the antibodies to the different strains.”

Is it the cold or the flu?

The flu, with symptoms such as high fever, headache, body aches, exhaustion and cough typically spreads across the United States every winter, between October and May.

Travis Gibbons, a technical support specialist at NKU, contracted the virus and was unable to attend his first few days of classes.

“I had it for five days,” Gibbons said. “I don’t even know where I got it. I just started feeling bad and all I could do was send my professors a letter saying, ‘Hey, I can’t come in, I can’t even get out of bed’… it was awful.”

Gibbons is one of many who received this year’s flu shot but contracted the virus anyway.

According to Kay, because of the similar symptoms, some find it hard to determine if they have the flu or just the common cold.

With symptoms such as sore throat, stuffy nose, cough and fatigue, the flu and cold can often be differentiated by fever and extreme exhaustion.

The flu often causes high fever (100°F to 102°F) which can last up to four days. A cold-related fever is rare, although a mild fever is possible in more severe cases. So the higher the fever, the more likely it is the flu.

Extreme exhaustion is usual when it comes to the flu, and is the most debilitating at the beginning of the virus. Extreme exhaustion never occurs with the common cold, although it is possible to experience slight fatigue or weakness.

So far this semester, Kay has not treated anyone with the flu, but she believes it is still important to take steps to prevent yourself from contracting the virus in case you are to come in contact with it on or off campus.

“The flu shot is the most important,” Kay said. “I think it’s number one.”

Without health insurance, the flu shot is available for $20 at the health, counseling and student wellness center on campus.

“Currently, under the Affordable Health-Care Act, most insurance companies cover it as a preventative,” Kay said. “If you have insurance, it should be covered, so it should be free for you to get one. We have plenty of vaccines available.”

According to Kay, you can also prevent the flu by washing your hands daily, eating healthy, getting plenty of sleep and staying away from others who are sick.

So, should you come to class if you think you may have the flu?

“I think it’s important for people to be respectful of others and themselves. If you’re sick and you have the flu, you can’t come in,” Adjunct Professor Stacie Jankowski said. “You’re an adult and you know what you’re doing. I would prefer for you to be here, but if you’re too sick to come, you’re too sick to come.”

Kay and Assistant Vice President of Facilities Management Larry Blake agreed with Jankowski urging anyone with the flu to try to stay away from campus.

“If you do have it, stay home,” Blake said. “Stay away from people and don’t spread it. That’s easier said than done I know, but that would be a big help if a lot of people would just refrain from going out in public.”

What NKU is doing to help prevent the flu

According to Blake, the custodial crew at NKU does some extra disinfecting, but ultimately, they can only do so much and most of the prevention is up to students, staff and faculty.

“We do some additional disinfecting in classrooms, on doorknobs and things like that,” Blake said. “We also have hand sanitizers at the elevators and several other places around campus that we keep filled for the students, faculty and staff to use. Beyond that, there’s not a lot that we can do.”

Ever since the flu pandemic of the H1N1 virus back in 2009, Blake says the custodial team has continued the extra cleaning practices during flu season, whether the outbreak is minimal or severe.

“We also pump outside air through the buildings,” Blake said. “It pulls stuff out of the air so we make sure that’s running full-tail this time of year.”

While pumping outside air into the buildings adds to heating and cooling costs, Blake said it’s important to do because it can remove both chemicals and illnesses out of the air, which could prevent the spread of the flu on campus.

“From what I’ve seen, NKU hasn’t been hit as hard as some other places in the area and hopefully it stays that way,” Blake said.

Gibbons is happy to be back to class and out of the house after his encounter with the flu virus and says he hopes he never gets the virus again.

“I can just tell you..this is the worst I’ve felt on a debilitating muscle level. I couldn’t move,” Gibbons said.

For more information on the flu and ways to prevent yourself, check out the following sites: