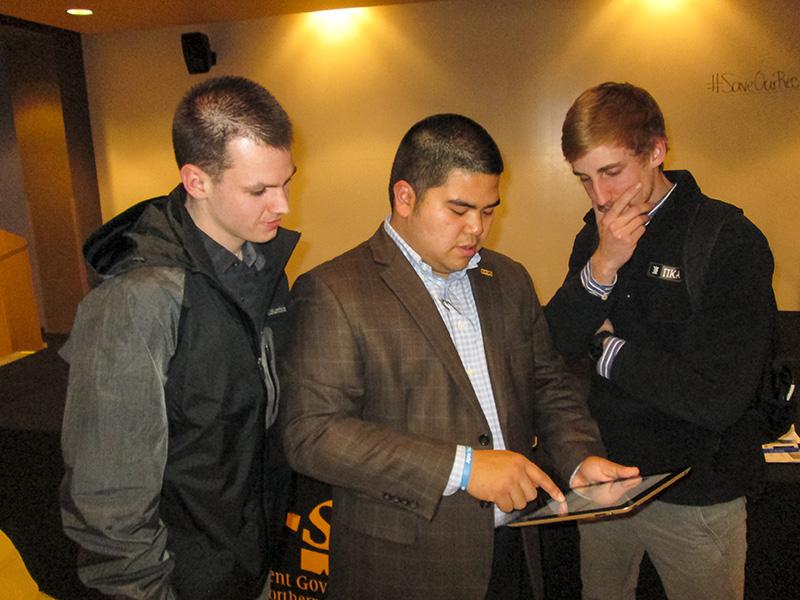 SGA President John Jose shows students how to sign the petition to #SaveOurRec. Jose held a forum Friday, Jan. 23, to discuss recent news of NKU's outsourcing of management for the Campus Recreation Center.

“When you all elected me as student body president last year, that’s something I harped on [transparency to the student body],” Jose said. “No matter how tough the issue might be or what it will be, I still need to inform you guys of what’s going on.”

Jose’s purpose was to inform students of the facts surrounding the issue and of a petition SGA has created to keep staffing and management the way it currently is without a third party. SGA hopes to get 7,500 signatures on the petition.

“I want to suppress the rumors and what people have been hearing through the grapevine,” Jose said.

As of now, the university has submitted a request for proposal (RFP) for a private firm to come and submit a bid on how they would run the CRC.

He told students that President Mearns has assured him that this [a third-party takeover] is not a done deal.

“They would have to be in a far superior state than we are now [for us to pick a third party],” Jose said, quoting Mearns.

“We will still own the building,” Jose said. “This is just to see who will run the everyday logistics, operations, management and programming of the facility.”

The $45 million, student-funded project will continue to be paid off for another 16 years.

Current staff in the CRC have an opportunity to submit and they are currently making their own RFP to be submitted to the university according to Jose.

The SGA President wanted to be very clear that he has spoken to President Mearns, and nobody has been fired or lost their job.

In 2007, students started requesting additional space in the CRC, according to Jose.

“On Oct. 11, 2010, SGA passed a resolution for a feasibility study to make sure NKU was equipped to expand the recreational facility, and who was going to pay for it,” Jose said.

The findings from the study came back on March 10, 2011 and they gave NKU the go ahead to start building the new facility, but at the students’ expense.

SGA held open forums from March to April of 2011 to inform students of this proposed new facility and expenses.

“On the SGA ballot that same year, students could vote if they were agreeing to introducing the fees so that we could expand our rec center,” Jose said. “The majority of students said yes on the vote.”

SGA recommended the expansion to the Board of Regents and Council for Post-Secondary Education, which looks over all the public institutions in the Commonwealth, and they approved it as well, according to Jose.

At the end of the same year, the Board of Regents approved the proposed rates.

“Fifty-one percent of students have used the CRC,” Jose said. “Last year alone over 7,000 distinct users used the the facility. It was expanded because it was too small for the growing student population.”

“The rec center expansion is a $45 million dollar project that is nearing its completion by August 2015,” Jose said. “It is funded by all 16,000 students on this campus.”

Students who are enrolled in 12 credit hours pay $384 a year towards the building of the new facility according to Jose.

“We are still in the process of waiting to see who will submit bids for our rec center,” Jose said.

He empathized with current CRC staff and other student workers about how unsatisfactory this can be; how they have no idea whether they will have jobs in the next six months or not.

“I think student jobs are a very big part of this campus, I think that it is what feeds our campus and makes us very unique,” Erin Donohue, sophomore BFA musical theatre major said. “I think our students definitely depend on these jobs. I know so many people who work here and their rent depends on it.”

Jose stressed the importance of solidarity of students at this time, as well as arguing the case in the right way, should the bid be given to a third-party firm.

“We need to make sure that we argue this as a student standpoint, from student perspective,” Jose said.

He pleaded with students that they should not turn on the administration or President Mearns.

The current renovations will not be affected by the the RFP process.

Either way, Jose is confident that the number of jobs will increase with the expansion of the new facility.

“You shouldn’t hate President Mearns. This is not an NKU Administration versus students issue,” Jose said. “They are just doing their duty to see what could be most effective for our student population.”

“Obviously they’re looking at bringing on third parties to try and improve on some of the things that current students and leaderships are doing there,” Benjamin Reed, junior history major said. “I’d be pretty upset if students in management lose jobs. If a third party did come in and there were benefits to the students and the university such as financial or better leadership or better run rec center, then I’m okay with that as long as some of the standards are met, such as students keeping their jobs.”

On Feb. 4 when the submission is closed there will be a committee put in place to review proposals.

Jose stressed the importance and need for having a student on the review committee.

THE RFP can be found on the NKU website and shows what companies need to be able to do in order for their submission to be considered by the Board of Regents.

Jose went through the RFP requirements in brief with students.

“It is the intent of NKU to enter into a five-year contract with the successful responsive and responsible bidder to manage that and will be able to help build and maintain a high-quality collegiate recreational program that will be operated in a student-focused, customer-focused, and financially responsible manner,” Jose said.