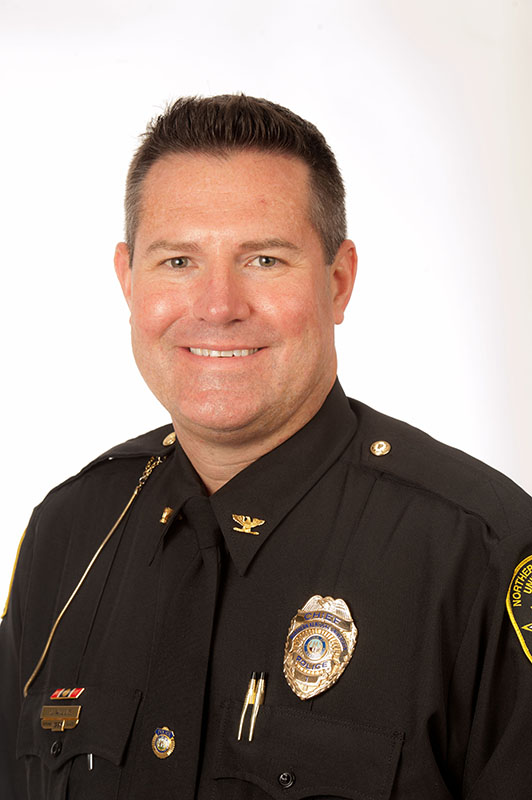 Chief of Police Jason Willis announced his resignation from NKU, effective May 29. Willis recently received a Ph.D. in education and educational leadership and plans to use his doctorate in his next career.

Chief Jason Willis has always wanted to be more than a police chief. That’s why he’s working to earn his doctorate as he celebrates four years of being NKU chief of police.

“If you approach this job as an educator, you will be more affective and you’ll enjoy working in the university environment,” Willis said.

After Willis graduated from the police academy  outside of Hamilton, Ohio, he went to work at Miami University  as an officer. During his fourteen years at Miami University he had worked his way up through the ranks, becoming sergeant, then lieutenant and finally receiving a promotion as a captain. While Willis was captain at Miami he performed duties similar to the assistant chief. He also became the director of parking and transportation along with fulfilling all his duties as a police captain.

“I was kind of wearing two hats before I came over to NKU,” Willis said.

Willis still loves Miami  and misses certain things about the school when comparing it to NKU.

“Miami was kind of like high school when I was getting an education and this is when I moved up to college and it’s all part of my educational experience,” Willis said.

Willis credits his former boss, who was chief at Miami, as being his mentor and is fortunate enough to have a great leader and learned a lot from him. He got a taste of being in charge when his chief would leave for months at a time doing consulting work. These experiences  gave him the confidence that being chief is something that he would really enjoy and something that he could do. So when the chief position opened up at NKU, Willis applied for it and got it.

Willis said that when he started at NKU he wanted to develop a type of hierarchy or chain of command for the officers to work their way up.

When you are the chief of police you are ultimately responsible for everyone in the department.

“I take a lot of pride in having that responsibility and I care for everyone here equally, they are all important to me and I want them to be happy here,” Willis said. “I’m trying to build a culture here and find officers that fit into my philosophy.”

According to Willis the most important part of being chief is his leadership role. He tries to keep the morale up of the officers.

“I believe that if I’m in good spirits and I’m staying positive so will everyone else,” Willis said.

Besides being responsible for everyone in the department Willis has managerial duties such as overseeing the budget and looking at strategic planning for the university.

“I’m kind of the liaison between the university’s top administrators and our department,” Willis said.

A Day in the Life

Willis usually starts his day at 7:30 a.m. with checking the police reports from the previous day. A big part of his job is also informing his boss, Ken Ramey the vice president of administration and finance, is kept up to date on what is going on in the police department.

“The last thing I want is for him to be blindsided by something someone else tells him, or he may see something on the news,” Willis said. “He needs to hear it from me first so I have to be on top of things and make sure he is in the know.”

Willis also shares a lot of information with the dean of students and other authorities on campus, along with attending meetings and being on different committees. He usually ends his day around 4:30 p.m.

Another part of Willis’ job is to hire people in the police department.

“I’m trying to build a culture here and find officers that fit into my philosophy,” Willis said.

Willis wants to hire the officers that can walk around the plaza and see a student and just stop and talk to them or if they are having an issue to help them through it.

“His first priority is the community which is the students and the faculty and the safety of everyone on campus. One of his most important things for his police officers is that we reach out and we have contact with the students and we build relationships on a continual basis,” Captain Gerald Pizzano said.

Even though Willis spends most of his time in meetings, he finds time to interact with students on campus.

“Any time that I could help a student going through a tough time, or I can brighten up their day and make it a little bit better that’s the kind of stuff I like to do and that’s what I find most rewarding about this job,” Willis said.