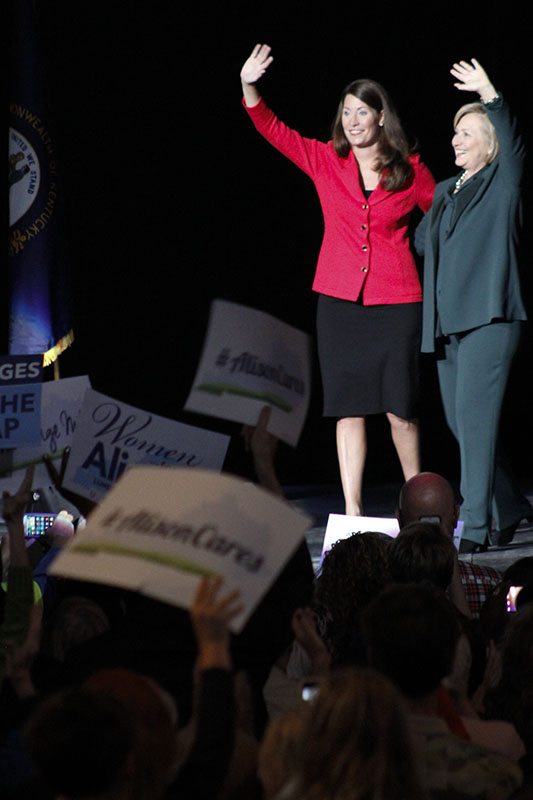 Clinton and Grimes both gave speeches to a crowd of about 1,400 people in the university’s Bank of Kentucky Center.

Grimes spoke about the importance of allowing students opportunities to pursue education, jobs, the Brent Spence Bridge, equal pay for women and fair representation for Kentucky in Washington, D.C.

Clinton spoke about the importance of allowing a leveled playing field for all people to afford the same opportunities, Grimes’ “comprehensive” plan for Kentucky, raising minimum wage and the extreme importance of this specific race.

“I’m here because I believe with all my heart that we need to change course,” Clinton said “…The entire country is watching Kentucky because maybe more than any other place in these midterm elections, the voters of Kentucky have the chance not just to send a message, but to alter the course of politics and government.”

Other governmental speakers seemed to focus on this idea. Former Kentucky Governor Martha Layne Collins also spoke at today’s event: “This may very well be the most important vote you cast in your lifetime,” she said.

NKU President Geoffrey Mearns attended this morning’s event as well. He was glad to see so many people turn out for such a civically important event.

“I think it’s a great thing for the university to be able to have our students and our faculty and staff to get involved in political discussions and current events,” Mearns said. “Irrespective of their views of the candidates or the issues, it’s important for us to participate actively in that discussion because it shapes our community, our state and our country.”

All seats were filled on the floor of the BOKC by the start of the event,  leaving many audience members left standing in the back. Members of the local community, faculty, staff and a small amount of students attended the event.

Hannah Hall, a sophomore pre-music education major, and Cory Whitworth, a junior organizational leadership major, showed up to this morning’s event. The two were excited to be a part of what they considered such an important process.

“I think a lot of students are apathetic because they don’t think their vote matters anyway,” Whitworth said. “I just think its always neat to be involved politically.”

Whitworth previously attended a rally for Barack Obama at the University of Cincinnati when he ran for president in 2012. She said that experience was one-of-a-kind—making her excited to see what Saturday morning’s event held.

Hall however had never been to an election event such as this. She believes events, such as today’s, could be easy remedies to the age-old excuse many people use of “being too uninformed to vote.”

Both Hall and Whitworth heard about the event on Facebook and quickly took up the opportunity, getting tickets that same day.

The idea for this event came about from Grimes’ campaign.

“The campaign came to us for a venue in Northern Kentucky and we gave them an opportunity to look at various venues on our campus including the Student Union, Greaves Hall, and they chose this venue,” Mearns said. “To my knowledge they [Mitch McConnell’s campaign] did not approach the university or The Bank of Kentucky Center.”

The Northerner previously tried to reach Mitch McConnell’s campaign for comment, but was unable to speak with credible representatives. Mitch McConnell has visited the tri-state area multiple times this year, but did not visit NKU.

Conway urged everyone in attendance to understand that this wasn’t only Grimes’ race but “theirs.” He asked every audience member to get at least 10 other people to vote for Grimes.

“It’s everyone’s job to create jobs, and if you do your job for the next 72 hours, Mitch McConnell will be out of a job,” Conway said.

While there were a few McConnell supporters in attendance, the majority of the audience cheered on all of the speakers in support of Grimes.

Overall, irrespective of any views of the candidates or issues, Mearns said he is glad NKU was able to be a part of this political process.

“I think it is a great thing for the university. Anything that raises our visibility in the area and in the country is a good thing.”

The Kentucky midterm elections take place Nov. 4. For more information on the candidates in the senate race, check out The Northerner’s election guide.