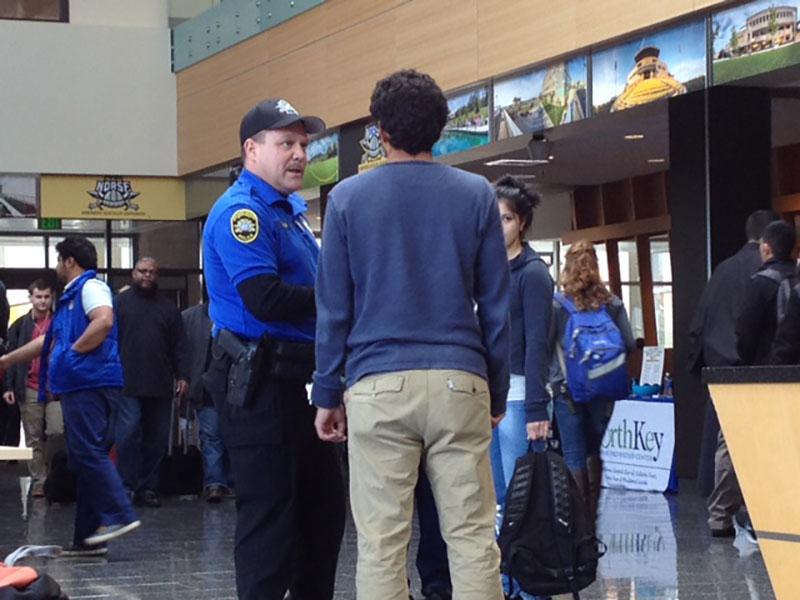 NKU Police showed students how to walk the line during National Collegiate Alcohol Awareness Week. Policemen offered a simulated Walk and Turn sobriety test for students on Oct. 21 and 22 to educate them about driving under the influence.

Students could choose between four types of drunk goggles that simulated a certain blood alcohol level, or BAC. Dan Fern, an officer with University Police, said the first pair simulated a BAC of less than .06, the second a pair showing levels of .07 to .010, the third demonstrating levels of .17 to .20 and the fourth simulating an intoxicated vision at night.

“The motivation behind it is to show somebody how just with your vision and based on what these goggles are designed to have your blood alcohol content to be, how difficult it is just to perform the basic…functions,” said Fern.

“It was fun, it was a fun experience, just to see what it’s like, actually put on the glasses.” Tyriq Roberts, junior sociology major, said.

Courtney Cook, sophomore international law major said trying to walk the line was hard for her. “It was weird, I felt like I was going to fall,” she laughed.

Fern said the Walk and Turn test is part of a three-test series used to measure levels of intoxication. “It’s the second-most reliable sobriety test of the three,” he said.

Fern said the Walk and Turn test is two-stages. The first part is having the person get in the starting position to walk the line and having them stay there. Fern then said he has the person walk nine steps along the line, looking at the ground and walking heel-to-toe with their arms at their sides.

Fern said students seemed to enjoy the test and that it gave him a chance to inform them about drinking and driving. “It’s kind of jokingly, but then I always add a serious side to it that,” he said. “If you were trying to drive a car, you can’t even walk a line.”

Roberts said the presentation was interesting. “He [Fern] was giving you information and stuff…based on your size how much alcohol you should be able to intake. Roberts said. “Like what’s too dangerous, what could actually kill you, what gives you brain damage.”

Fern added that the dangers of drunk driving are immense. “When you’re behind a motor vehicle and you have that BAC, then you’re basically driving a torpedo, so to speak, and if you can’t control it, bad things happen.”