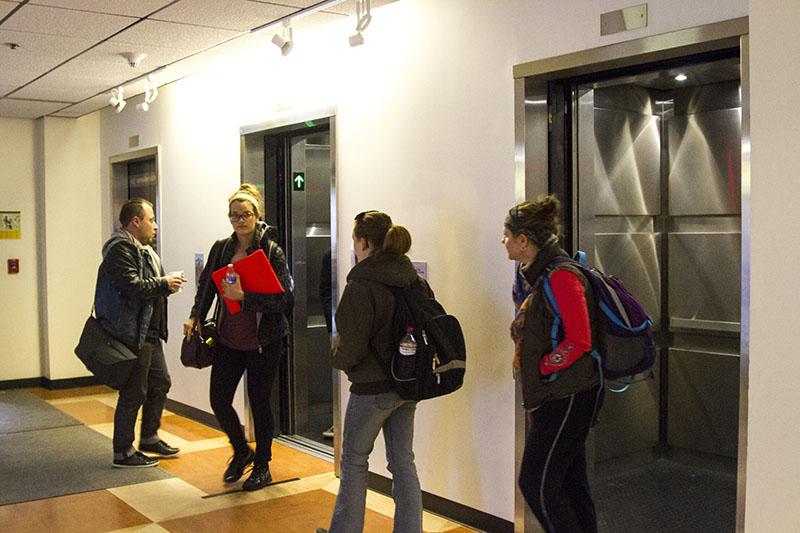 One Friday afternoon, a group of students gathered outside the elevators on the third floor of Landrum Hall, where they were told an elevator had malfunctioned.

The real problem was a testing of elevator safety brakes, one of several upgrades to the Landrum elevators that some feel are sorely needed.

Paul Hundemer, building trades superintendent at NKU, said they received “about three service calls a month” about Landrum elevator malfunctions. That was one of the reasons, he says, that the ongoing renovations moved up in priority.

Dr. Kristine Yohe has taught English at NKU for 17 years and is exclusively in Landrum this semester. While she says she has never been stuck in a Landrum elevator, she knows people who have. She said that she sometimes feels unsafe in the elevators, like when doors “act like they’re not going to open.”

Hundemer described the details of the elevator renovations, which aim to improve the elevators both in terms of safety and energy efficiency.

“We’ve been modernizing the three elevators, upgrading the operating equipment, the safety devices and the cab interiors,” Hunderner said.

These renovations began in May, and so far two of the three elevators have been completely renovated. The third is expected to be finished by November, according to Hundemer, who says they are currently ahead of schedule.

However, Yohe voiced some skepticism about the current elevator renovations.

“I think it’s been worse in the last maybe six months,” Yohe said. “I think quite honestly the renovation has seemed to make things bumpier and I don’t really know why.”

Blaine Rose, a senior English major, has most of his classes on the fifth floor of Landrum and takes the elevator regularly. While he has no negative experiences with the elevators, he somewhat regrets the timing of the renovations.

“I like that they’re finally getting around to the elevators, too bad I won’t be able to use them,” Rose said.

Hundemer says the new technology is “smarter”. In the event of a malfunction, the “hall call” button response will be going to the elevator car that the call came from, rather than all three. By doing this, Hundemer says there will be “quicker response time” and save 15 percent of the energy utilized by the old equipment.

The Landrum elevators, which have been in use since the building’s opening in 1976, have regular maintenance routines. This includes full-load tests every five years (the last of which occurred in 2013), annual inspections and monthly preventative maintenance. Nonetheless, Hudemer stresses these renovations were long due.

“As long as the elevators are maintained and get inspected annually and upgrade parts as they wear out, they’ll last a long time,” Hundemer said. “But they were at the end of their life.”