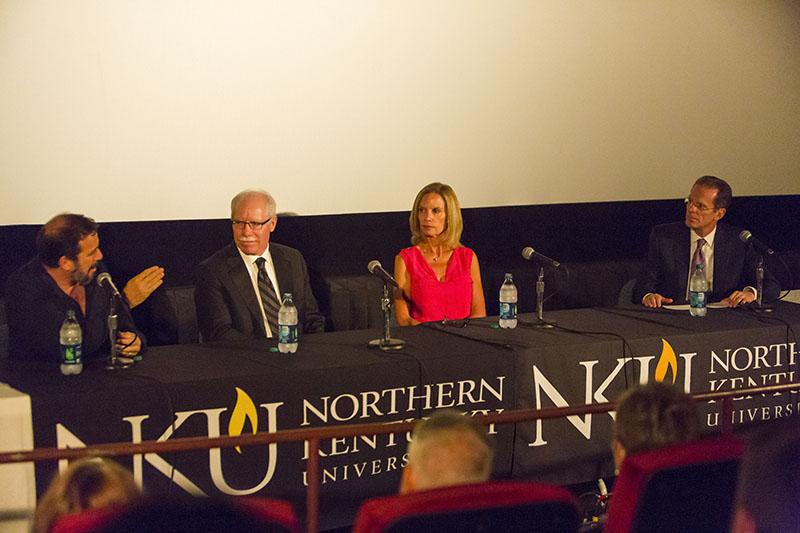 Michael Cuesta, Rich Boehne, and Sue Bell-Stokes take part in a panel discussion lead by President Mearns after an NKU screening of 'Kill the Messenger'.

Mearns focused the discussion on a feedback of the movie from the three different perspectives that each panelist hold.

Bell-Stokes: I did think this day would come, I always thought that he would be vindicated. I talked to Gary about it, probably the last time in 2003, and we had a conversation about it, and he really truly thought that there had been movie deals that we had discussed, or had been in the works, and had some fall thru. And I said ‘I think one day a movie will be made, and you’ll be vindicated.’ And he said ‘No, it’s not going to ever happen, no one cares, and it’ll be an old story and no ones going to pay attention to it.’ And I said, ‘I think it will.’ … Maybe because it was so wrong what happened to him, and I knew he was right, and I knew it was a great story, and he was a great reporter.

Mearns: So what was it like, you supported Michael and others in the production of the film, what is it like after that work is done, to see your family and yourself portrayed in film?

Bell-Stokes: It means a lot to me, and I found it comfortable with the producers, and Focus Features, and with Michael, and Jeremy playing Gary, I felt comfortable with it. My family and I had discussions before we signed to Focus, you know … Peter Landesmen had written a wonderful script, I trusted him, I trusted Michael, I trusted Jeremy Renner, I felt comfortable where I trusted Focus. I knew they would to the movie the way we it needed to be done to vindicated Gary, and to tell the truth, what really happened. So you have to tell that story in two hours, so obviously things have been changed a little bit and certain things didn’t happen in that time frame, but once again you have to tell the story in two hours, so you have to condense things a little bit. But I think they did a great job.

Mearns: Michael, so a question for you. You’ve had extraordinary experience, extraordinary success in both film, directing and producing, as well as some very accomplished television dramas. Taking off on what Sue said, what challenge of taking a very complex story, a story that was complex at many levels, personal, professional, political, and telling that story in a two hour time frame?

Cuesta: That was the hardest thing about making the film for me. When Peter Landesman did the patient he got what’s in the film is the script and basic structure, as far as the investigation, the turning point, going out of Gary’s point of view, and seeing the machine build up and see how it out of control, and then seeing it on the defensive to clarify what he really wrote and to see him sticking to the story as the … I focused on that, that was the structure, and from him the character, from Gary Webb, it’s more subjective, and I had to get on his shoulders emotionally, and at the beginning of the film which is very much a procedure …  It’s sort of a heroes journey as far as your dramatic structure.

Mearns: So Rich, let me ask you a question. The movie portrays a newspaper, and on the one hand there’s this very constructive relationship, the partnership between a reporter, an editor, and management, and then as it starts to fall apart, that partnership becomes adversarial. Was that an accurate portrayal in your extensive experience?

Mearns: Where is the future of investigative journalism? Where is it going?

Boehne: Well, it’s under duress. If you think about a market like Cincinnati today, when I was at the post, there were several hundred reporters who were on the streets, today I don’t know how many reporters there are, but it’s probably a third of what it was. But the economics are difficult, and the papers, many of them have disappeared, including the post. And investigative reporting, there’s just not near enough of it. I think this is an opportunity for us to look in the mirror and say, ‘We need to step up.’

Mearns: Michael, you were talking about the film was really based upon a character, how does that change the dynamic of you, a director, of working with the leading actor, Jeremy Renner, does it change your relationship?

Cuesta: Jeremy didn’t do a lot of research. I know the family sent me a bunch of videos, and I mean Gary wasn’t in a lot of it, but I watched them, and I just wanted to submerse myself in it. Jeremy didn’t watch a lot of it. I think he trusted me, and he just wanted to know emotionally where the character was, and then he says the words, that’s how a lot of actors work.

Mearns: So Sue, some of the most moving scenes for me, where the scenes where Gary interacts with your oldest son, so how does he feel about it, because that relationship between a father and a son is so important?

Bell-Stokes: Ian has seen the movie twice, all the kids have, and they love it. And I was relieved that they loved it … they were moved by it. The relationship they show, Ian wasn’t that old at the time, they made his character older, and Peter Landesman did that because you’re trying to show this father-son relationship, and that’s easier to do with an older son. And they have that relationship with the bikes, and that was after Ian was 16, and that was a very important part of their relationship. So Peter would take parts of Gary’s timeline and move them around, so I think it was important.

Mearns: So Rich, as I mentioned earlier, you knew Gary as a young reporter, at that time were you able to anticipate the trajectory of Gary’s career?

Boehne: At that time we were freshman and sophomore’s falling asleep in class, so … I mean he jumped in quick, and was very passionate about what he did. I pulled some of Gary’s files at Scripps which we still have, and I was reading a lot of the stories that we he wrote, and I enjoyed reading some of the comments back and forth, between Gary and his editors, and there was this one great line, ‘Hey look, I didn’t become a newspaper man to make friends.’ And it’s just a classic journalism line.

Mearns: Michael, what are you hoping to accomplish as you think about the film, beyond just it’s artistic complex, is there something that you hope this film will accomplish?

Cuesta: I didn’t make the film to accomplish anything, but you know it’s funny, a filmmaker doesn’t realize their movie until you’re very close to finishing it at the end. So what I found in the end was that, with the story that we told, that he made a sacrifice, and the film goes off like that, and he kept going and kept going to keep this thing alive, and it’s not as satisfactory in the end, because I like to think that there’s some power in vindication, but he got people talking. He got the CIA director to that town hall meeting, and he got the CIA to release two reports on what happened. So I see that as a thing of. ‘See it does work, and don’t give up, and we need guys like this.’