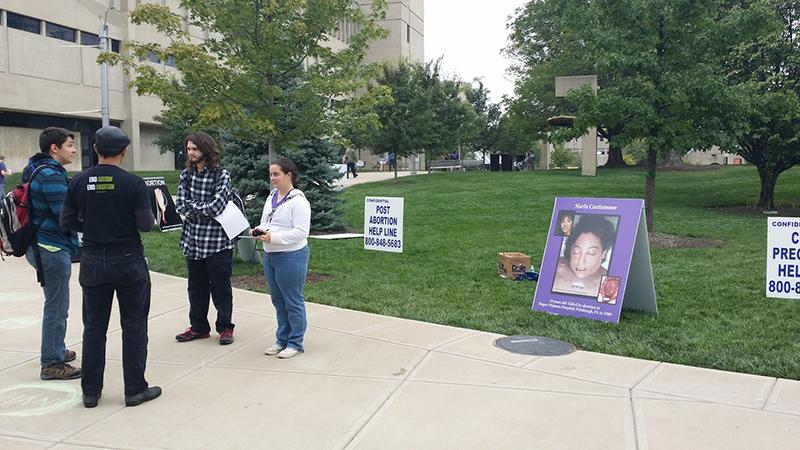 Students discuss the rights and wrongs of abortion among graphic pictures placed outside the Student Union.

On Wednesday, a group aimed at starting civil conversation about the pro-life movement came to campus.

Created Equal is a group whose focus is “getting the youth involved, and training the next generation of pro-life activists,” according to Joe Bermingham, a junior accounting major, who was one of two students who co-sponsored the event.

The people who advocate for the Genocide Awareness Project are also older, according to sophomore pre-sports business major Joseph Trammell, who helped Bermingham plan the event.

Trammell said that one of the biggest advantages to Created Equal is that it focuses on the younger generation, and it has younger activists speaking to people.

“Even if people disagree, I think that people like it [Created Equal] a little bit more, because it’s their peers talking to them,” Trammell said. “I don’t know about you, but when an older person is trying to tell you something, sometimes it doesn’t always hit you fully as if a peer were telling you.”

Despite people’s concerns for the use of graphic imagery, Kathleen Hillebrand said that they do have a good reason for doing it.

“A lot of people don’t realize how graphic abortions are,” she said, “and they don’t realize that not only are you killing a baby in the process, but it can also do a lot of damage to women who are getting the abortions.”

Although the group may not change peoples’ minds, Bengie Birkenhauer, an undeclared sophomore, said that there were several people who were curious about the display and the pictures, and didn’t realize that abortion was that graphic.

“They’ve got shock value going for them,” Birkenhauer said. He disagreed with the group and their display. “It’s pretty tasteless, especially when you take into account that women here might have had miscarriages or something.”