5 things you missed at the SPJ Lunch with the Pros 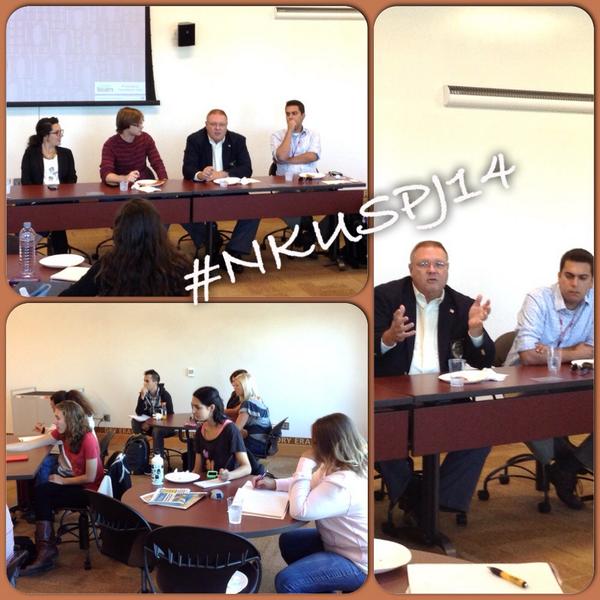 You’ll never have the same day twice. You’ll question the trustworthiness of law enforcement. And you’ll need to work on your interpersonal communication skills. These are just a few of the things you may need to be a crime reporter in the digital age, according to the media professionals who came to NKU today.

On Sept. 19 at 12 p.m. the NKU chapter of the Society of Professional Journalists hosted a Lunch with the Pros: Covering Crime in the Digital Age, in Griffin Hall. Enquirer breaking news reporters, Keith BieryGolick and Ally Marotti, WCPO Insider reporter Kareem Elgazzar and Alexandria Police Chief Mike Ward were in attendance of the event. Here are five things you may have missed:

We are no longer in a society who has to wait for news till Monday at 9 a.m. when papers are delivered. We are living in a society and within a generation that expects and receives news the second it breaks.

Keith BieryGolick agreed saying that it’s more about getting the correct information out first.

Mike Ward, police chief, said that relationships aren’t the same as they once were.

“I’m going to tell you that the relationship between the media and the police today is not what it was ten to fifteen years ago,” Ward said.

He said that all the young people he’s hiring right out of college can “text like crazy,” but can’t sit across the table from someone and have a conversation.

He said it’s important to go above and beyond, in every situation you’re presented with. And even though he’s supposed to get off at midnight, he had to stay until 4:30 in the morning to cover a swat situation.

“Digital allows you the opportunity to add texture to your story,” Elgazzar said.

You can do so much more online, Marotti agreed. Referencing a story she recently wrote, she said that you can show much more emotion online.

“Do what you think is important,” BieryGolick said.

If you do what you think is important, everything you do will be so much more fulfilling he said. You will devote more time, and it’ll come out 100 times better.

There may be things you’re “voluntold” to do as a journalist. But it’s important to find time for what makes you tick.

Look out for more NKU SPJ events later in the semester. Taylor Trusty, CEO from Blackstone Media will be presenting in GH 240 at 3:30 p.m. on Sept. 22.