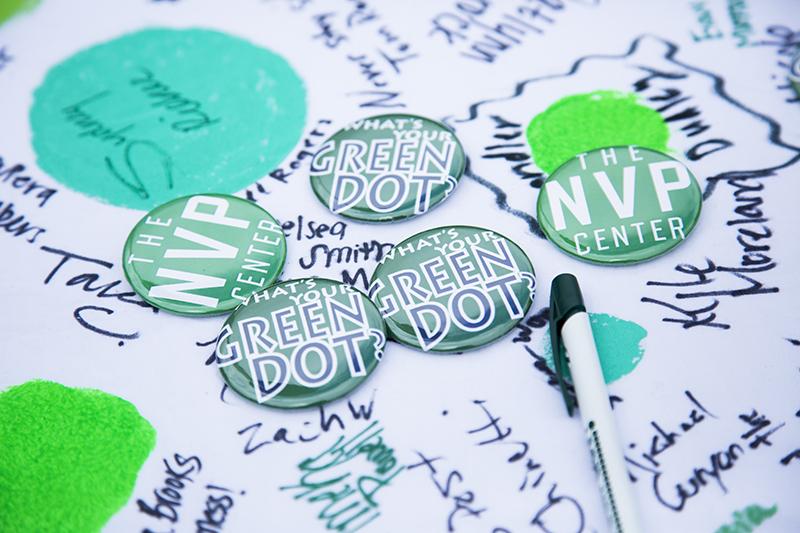 Nose Violence Prevention handed out buttons on its campus-wide launch day. It has a Green Dot training session on Thursday, Sept. 18 to promote bystander intervention.

With new federal legislation being proposed in both the house and senate and while over 70 different universities across the country are under federal investigation, NKU is taking measures to make sure students are informed about sexual assault.

According to NKU police reports, there have been 14 sexual assault cases that have occurred on campus in the past six years. A study by the US Department of Justice states that an estimated one in 20 women will be sexually assaulted while in college.

“It’s been really out there,” Ann James, NKU’s associate dean of students and Title IX coordinator said about the subject.

James explained that NKU’s sexual misconduct policy covers four parts: nonconsensual sexual contact, sexual harassment, nonconsensual sexual intercourse and sexual exploitation. She said that students who feel like these things are happening to them should report them to the dean of students’ office.

“Students will say ‘I don’t know if what happened to me is actually against policy or against the law,’” James said. “We wanted to make it very specific because we wanted students to read the policy and say ‘okay, yes. That’s what happened to me.’”

Prior to the university’s adoption of the policy, James said that NKU had vague standards as to what counts as a sexual assault. She added that the university is obligated to investigate any complaint it receives from students.

“Something that’s been in the news recently is students feeling as though the universities they’re attending aren’t investigating the complaints they’re filing,” James said.

After investigating, NKU would file a hearing to come up with a ruling for the case, according to James.

“It’s very time intensive, but I think that a student who’s reporting violence and the accused student deserve that time being spent because this can be a life changing event for everyone involved,” James said.

James also explained even that if a student files a report with the dean of students office they won’t be required to go to the police if they don’t want to. She added that she would encourage them to, but they don’t have to.

“If we know something, we have to act,” James said.

According to James, the police must be notified if a certain threshold in severity is crossed.

The issue of assault isn’t limited to just women. Men can be victims too. James said that an approximate one in six men in college will face power-based personal violence. This includes dating violence, sexual assault and stalking.

“What’s even more problematic with men who are victims is that reporting is even lower,” James said. “It’s not talked about much and I’m not sure that men in college feel like they have sources.”

Simply teaching people how not to become victims and what their options are after a sexual assault isn’t enough, according to James.

“It’s frustrating when violence prevention strategies focus on how not to be victimized because I think it would be more effective to focus on why people shouldn’t victimize other people,” James said.

“If you’re sexually assaulted by someone you know and trusted, it’s difficult to think of going and reporting them,” James said.

While James believes that NKU’s misconduct policy handles cases well, she said it’s hard to tell if the university is any safer or any more dangerous than other universities in northern Kentucky. However, she is hopeful that the introduction of the Norse Violence Prevention center and the start of Green Dot training on campus will make a positive long-term impact.

The center was funded by a grant from the Department of Justice’s Office on Violence Against Women, according to James. Molony, a University of Louisville graduate who also worked in a similar program there, said she helped write the grant proposal.

As an example of what the program does, Molony said that if someone trained under Green Dot saw two people fighting, their training would help them overcome obstacles, such as uncertainty of what to do.

“Your gut feeling is telling you that something is wrong, but sometimes we don’t know what to do. Maybe it’s not safe for us to say anything,” Molony said.

Green Dot uses three principles, the three D’s, according to Molony: directly, which is face-to-face confrontation; delegating, which involves finding someone else who could step in and distracting, which incorporates methods to separate the two conflicting parties.

Norse Violence Prevention doesn’t have a set formula to help students, according to Molony. Instead, the center handles each student uniquely depending on their needs, she said.

“That can entail reporting if they want to report to the university or police, we will support them in that and go down that road with them 100 percent, but there are some students who don’t want to report and that’s okay too,” Molony said.

James said that students who approach Norse Violence Prevention don’t have to file a report with NKU or the police, but Molony can provide students with support and resources. James added that Molony, obligated under a piece of federal legislation known as the Clery Act, would have to file an anonymous report if the student didn’t want their identity revealed.

“Half the battle is getting people to talk about it,” James said.

Norse Violence Prevention is offering Green Dot training on Sept. 18. Students must register for the training or can visit the center’s office in SU 304 to get more involved.

Those who live in the dorms know that the swipe access was added to the dorm entrances as a safety measure. What they probably don’t know is that swipe access wasn’t designed to prevent sexual assaults.

“What the system is designed to do is secure the buildings. The only time it would be active is after hours when the buildings are normally locked,” Blake said.

If a person uses their card to get into a building, the system will know when they went in but not when they leave, he said. The swipe cards must be registered with a building before the user can use their card to enter it.

The system wasn’t designed with preventing sexual assaults in mind, according to Blake. Instead, he said that it was meant to provide safe, after-hours access, and also using facial recognition through the all card system to gain access into a building.

“If you need to get into a building but you forgot your card, or maybe you were told you could get in but they didn’t give you card access, there will be one place you can go, press a button, and campus police will be able to see your face to know that you are you,” Blake said.

The secondary function can put buildings in lockdown in the event of a major emergency.

Using an example of an active shooter, Blake explained that campus police could “remotely lock one building or all the buildings.” He added that people could still exit buildings during a lockdown, but not enter.

“There’s a risk in that you’ve locked everyone out,” Blake said. “It has good and bad and likely that function is not going to be used a lot, hopefully never, but it does give us some ability to confront access to the building.”

In the case of sexual assaults, Blake said that the campus Call Boxes are a student’s best bet. He also suggested that students not stand there and watch someone get assaulted.