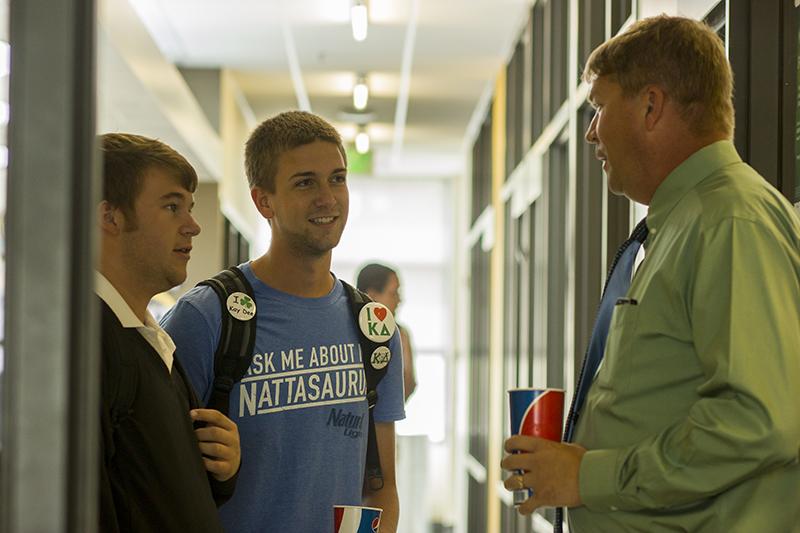 Dean Waple interacts with students Karl Bragg and Matt Kriege during his lunch break in the Student Union.

Thursday marks Dean Waple’s seven year anniversary of being NKU’s dean of students, the longest he’s ever worked at a university. The Northerner sat down with Waple to find out his roots, why he’s stayed and what his plans are for the future.

Jeffrey Waple didn’t always want to grow up to be a dean of students.

Waple, born in Bowling Green, Ohio but raised in Loveland, enjoyed playing soccer and making music as a child.

“I had a lot of aspirations as a child,” Waple said. “I was a band geek. It started off with the trumpet and transitioned into sousaphone and my lifelong goal was to dot the ‘i’ for the Ohio State marching band. I used to practice in my backyard dotting the ‘i’ with my sousaphone.”

In middle school, a soccer incident caused Waple to consider a medical career.

“When I was in seventh grade I wrecked my knee playing soccer,” Waple said. “Eventually I got strong enough to play soccer again without a brace, which I thought was pretty cool.”

After graduating from Loveland High School in 1987, Waple pursued a biology degree at Heidelberg University with the intention to be a physical therapist.

However, after taking leadership roles in university greek life, athletics and housing, Waple began to change his mind.

“I worked for the dean of students between my sophomore and junior year and was in charge of roommate assignments,” Waple said. “That ended up being the start of this career.”

Prior to becoming the dean of students at NKU, Waple worked as the assistant director of housing and dining at Bowling Green State University and as the director of campus life at Clarion University of Pennsylvania.

A day in the life

Waple became the dean of students at NKU September 4, 2007.

While there are no “typical days” as a dean, Waple said each day begins and ends the same way. He arrives at NKU around 7:30 a.m. each morning, well ahead of most students, faculty and staff.

“That allows me to get in here, get organized for the day, clear out my email, return those critical ones that I need to, and then start the day moving,” Waple said. “I’ve learned here in my 20 plus years that you can’t lead behind a desk.”

Many days are filled with staff and student meetings. Waple spends much of his time with the 11 administrators who report directly to him. Julie Bridewell, Waple’s secretary, builds small gaps between meetings in his schedule as well as lunch, a meal he didn’t always view as necessary.

“I would go in and maybe have a granola bar, a diet Pepsi and that would be it,” Waple said. “But that’s not very healthy for me. And then I was a grouch.”

Some days Waple sticks around campus for evening activities such as Fresh Fusion, town hall meetings and Feast for Finals.

Other days he makes the 25-minute commute home to Milford in the late afternoon.

“I have found that it is a good distance for me because I can clear my mind usually of all things university by the time I hit the door and I’m able to be dad or husband or coach and not have a lot of jumble,“ Waple said.

According to Waple, there are far more good days than bad days as the dean of students.

“My best days are those when you don’t realize you’re making a difference and someone tells you you are,” Waple said. “I get lots of hugs from students at graduation and those are great days because you know in some way you’ve helped mold them into who they’ve become.”

“Probably the worst days here are we when get notification of a student death,” Waple said. “We’ve done some posthumous degrees for students who’ve passed. But we’ve also had to meet a brother or sister in a residence hall room and help them pack up some stuff.”

Overall, he said, the job is rewarding. He’s sure it’s one of the best jobs on campus.

“I love what I do and I love everyday coming into work. There are days when I’m not particularly thrilled to come in knowing what’s going to happen, but there are never days like, ‘Ugh I have to go to work.’”

In reminiscing on the past seven years at NKU, Waple said the memories that stand out the most are those involving student engagement across campus. In particular, Waple believes the collective revamping of the student code, building the NKU Rocks programs and the construction and renovation of many buildings on campus are among some of the greatest projects he’s been a part of.

Recently, he put together a resume for an application for aspiring chief student affairs officers and realized just how much had been accomplished during his time at NKU.

“In reviewing that, it’s like, ‘Wow, we really did that.’” Waple said.

Waple said that addressing new Title IX issues and sexual assault issues are on the horizon as new challenges to overcome.

Some of Waple’s favorite memories, however, are from day-to-day staff interactions.

“We have a lot of laughs in here. We always joke around that we’re going to write a book someday called, ‘I Can’t Believe that Student did that.’”Waple said. “My staff a couple of years ago got me some gag gifts and they all had to do with some student issues we were handling at the time and we had a great laugh about it.”

Bank of Kentucky events, homecomings, orientations, student government retreats, the retirement of President Votruba and the inauguration of President Mearns also stand out in Waple’s mind.

“I remember beautiful move-in days. We’ve had seven in a row with no rain,” Waple said.

Waple’s first year at NKU was anything but smooth.

“My first year here was a huge challenge professionally,” Waple said. “[Former vice president of student affairs] Dr. Davenport hired me for a skillset and I didn’t have all the pieces in place. His expectations were high.”

A series of campus incidents rattled the new dean.

“In my first two months we dealt with a windstorm that knocked out power on campus and all around the region, we had a shooting in Callahan Hall– no one got shot, but someone shot in the residence hall and the bullet went through a window,” Waple said. We also had a major hazing incident involving a sorority. And I was going too fast.”

Waple was in a hurry to climb the ladder to vice president. Dr. Davenport created a professional development plan for Waple and a list of goals he still has hanging in his office.

“I’ve kind of learned that listening, building relationships, getting all the facts, not trying to jump ahead too fast, not running to a fight, all of those things my great mentors have taught me have really helped over the years,” Waple said.

According to Waple, over 20 students he’s mentored since becoming dean have graduated from a higher education program. He also said he’s become more adept at handling campus crises, such as the water main break that affected several buildings on campus two weeks ago.

“Younger in my career I probably would have been a little bit more panicky, but you learn to roll with some of the crises,” Waple said.

Waple said he’s been blessed with a great staff who has worked together to accomplish great things.

“I mean I have Steve Meier, I thank God everyday that I inherited him six years ago and someone who’s as knowledgeable and as kind as he is,” Waple said. “And I inherited Julie [Bridewell] who makes me laugh everyday and keeps me on task. And then I was able to add Ann James to the staff in this office and so I am fortunate.”

Collectively, Waple said they’ve completed several projects he’s proud of, including the Recreation Center, new housing, renovation of Norse Commons, changes in Student Government, the creation of new departments and being able to increase staff and funding in some areas.

Waple has worked hard to strike a balance between his personal and professional life. When not at the office, he enjoys volunteering, participating in his church and coaching his kids’ soccer teams.

“I spend a lot of hours [at NKU] but I’ve learned a balance. I also have a great life partner who understands the balance and the demands of the job, so I’m very fortunate,” Waple said of his wife of 21 years, Susie. “Also my kids are very understanding as well.”

While earning his master’s degree at Eastern Michigan University, Waple was a high school soccer coach for two years and took his team to the state playoffs. At Clarion, Waple ran the soccer program and became president of the Clarion River Valley Strikers club team.

After making the move to Cincinnati, Waple’s children–Emily, 16; Nate, 13 and Matt, 9, became involved in the Cincinnati Soccer Alliance. A board member of the Alliance for five years, Waple is also on the Cincinnati United Soccer League board of governors, which oversees 23 soccer clubs in the Cincinnati area.

“I’ve been coaching my daughter since she’s been 4 and she’s almost 17 now and Nate’s since he was 12,” Waple said. “It’s kind of my therapy because when I get out there on the field with them I only think about soccer.”

When it comes to plans for the future, Waple is certain he wants to one day be a vice president. ‘My next job will be vice president of student affairs,’ proclaims a wooden board leaning against Waple’s office window in the Student Union.

Despite this dream, Waple said he is willing to sacrifice it for the sake of his family and quality of life he already has.

He said Dr. Votruba once told him in a mentee session, ‘Don’t mess with happiness.’

“There’s a different beck-and-call procedure if you’re a vice president,” Waple said. “I probably can’t coach as much as I used to. There’s some sacrifices to be made at the next level.”