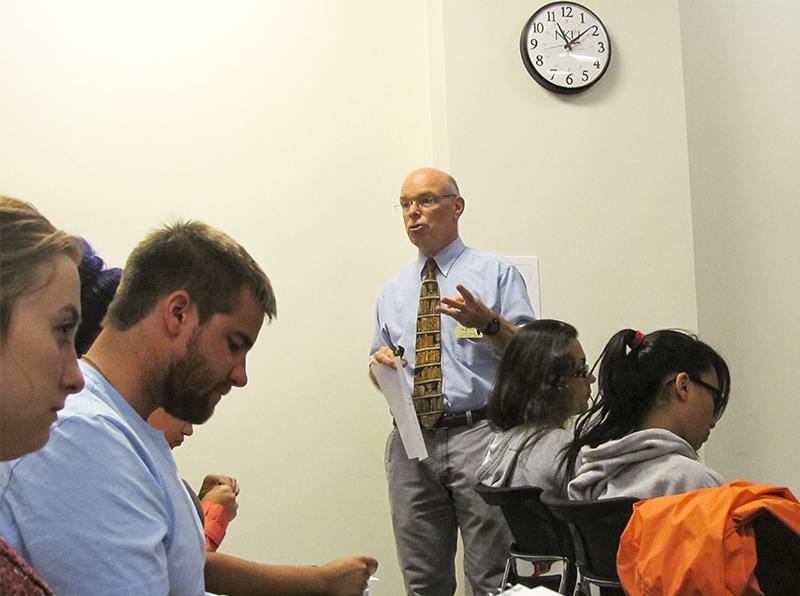 Wednesday, Sept. 3 marks the second release of a freshman survey designed to help students, faculty and staff connect in ways that will ensure each student’s success.

MAP-Works, or Making Achievement Possible, is an assessment system used by colleges and universities across the nation that enables students to give personal feedback and establish their network within the university. “It enables us to learn more about the student because we have the student’s voice via the survey,” said Peg Adams, director of University Connect and Persist.

The survey is sent out to students via email and takes 10-15 minutes to complete.  Students will have three weeks, from Sept. 3 to Sept. 24, to complete the survey.

Adams said the survey is sent out early in the fall semester to help the university know where freshmen are struggling.

“It’s important that we do the survey in the first three to five weeks of the semester so that we can learn about our students early in their college experience…because that enables us to see what’s going on,” she said. “It brings a lot of information together from various systems on campus, it shows us who the student is connected with, who’s in the student’s network.”

Ryan Padgett, assistant vice president of Student Success and Assessment, said that the survey coincides with NKU’s Fuel the Flame initiative, which promotes student success at all stages of the college journey. “Higher education is dynamic so new issues can arise. So by making sure we continue to assess and ask for student opinions on things, we’re able to take what the students’ needs are and help us put programs and services in place to help them where they’re at.”

The freshman survey was released for the first time during the 2013-2014 school year. This year sophomores will also receive a survey about their transition into their second year of college.

“The second year can be a challenge for students because there’s what’s called a sophomore slump,” Adams said. “The first year everything’s new and exciting and they’re getting acclimated. The second year, sometimes the newness has worn off. Graduation feels like a long way away and there’s a lot of questioning.”

Padgett said that adding a survey for sophomores helps NKU provide resources for students throughout their college career. “Just because you persist into your sophomore year, it doesn’t mean your problems or issues disappear,” he said. “So what it allows us to see is that next step, how can we support that student during their sophomore year.”

According to Victoria Suttmiller, associate director of University Housing, the survey results are shaped based on the student’s answers. Students that live on campus will be asked specific questions about their experience as a resident. “It’s really about them learning what experience they’re having,” Suttmiller said.

Adams said that the MAP-Works system is a way for the university to better understand its students.

“MAP-Works is a system that enables faculty and staff to see a complete student picture and helps [them] communicate in ways that can more effectively serve a student,” she said. “The MAP-Works system was brought to NKU because we realized there were a lot of people working with students but we didn’t know who all of us were.”

Padgett said the survey helps unify programs on campus by identifying how they can help students early in the semester. “It helps the students understand their strengths or their weaknesses…their opportunities…to grow and develop,” he said. “It helps highlight the programs we have to help students succeed in every way.”

Top 5 issues freshmen faced in 2013-2014 and what returning students have to say about them:

Jozie Banas,sophomore psychology and Spanish double major, said she did well academically her first year of college but that she still experiences text anxiety. “I study super hard and then I get to the test and I’m like ‘Oh gosh, I’ve forgotten everything,’” she said. Banas advises students to find their own study system. “Not everybody studies the same way,” she said. “Know that there’s not one way to study and that if you’re not getting it from that one way, try something else. Because there is a way to retain information.”

Greely took Anatomy 1 in a past semester and is now taking Anatomy 2 this fall. She said throughout Anatomy 1 she realized that grades suffered when she didn’t consistently review her notes. “I have noticed that you have to force yourself to study at least once a day,” she said. “Even if it’s only 20 minutes you have to do it.”

“I know it sounds like a lot, but if you study one hour per day, then there’s your five hours,” said Banas. “Don’t just sit down on Sunday night and study for five hours straight.”

Banas said some of her family members have health problems, which makes her nervous about being away from home.  “I’m not really in general homesick, I think just worry about the people that are at home,” she said. “I miss being away from them, I guess, because I worry.” Banas said she has found a support system in her freshman advisor, Anita Adkins. “It’s nice to have someone to talk to,” she said. “My sense of family is that I have my mentor and I have my friends that keep me occupied and keep me active, healthy.”

Greely shared how a friend was able to deal with his homesickness. “He goes to Morehead and actually works on a farm down there and he lives on a farm [at home] up here,” she said. “He found a way to connect school and home…he does the same kind of things he’d do at home.” Greely advises freshmen to find a connection between home and school to be involved in, and to find a good group of friends for support.

4. Struggling in two or more classes:

In her first semester Greely struggled in her Statistics class. She said after taking the MAP-Works survey she realized that she needed help. “I set up an appointment right after I got [my results] and I…made sure I went each week, just to get some extra help in,” she said.

Banas said she has been able to keep on top of assignments by using a planner. “I was in University 101 last year and they really emphasized having a planner,” said Banas. “Before that I’d never used one.” She added “having my planner and knowing…what I need to have prepared helps me keep everything in perspective.”

5. Lack of confidence about finances:

Banas said most students don’t realize that their financial aid is affected by their academic performance. “I’m starting to see that a lot of students are really dependent on financial aid but they’re not aware of how easily it can be taken away,” she said. “It’s such a fragile thing and I don’t think that’s something that they take into perspective. Because it can be taken away with the drop of a class or failing a class.”

Allison Greely, sophomore athletic training major, said NKU pushes freshman to search out scholarships but returning students aren’t as active in applying for them. “I looked for more of them my sophomore year,” she said. “I started looking through NKU [scholarships] but if I needed some extra help I looked other places.”