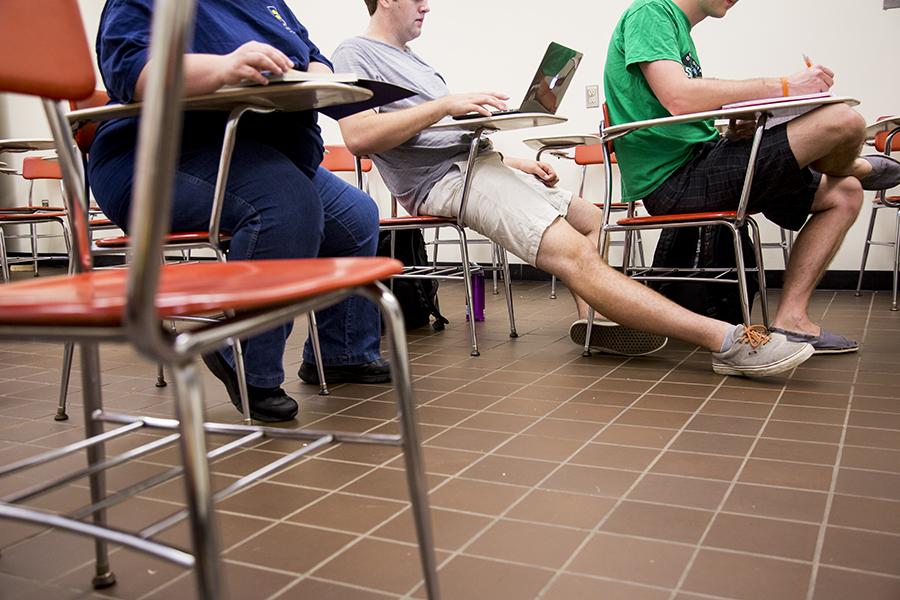 Several NKU students struggle to fit comfortably in desks in Founder's Hall. Groups of students have shared their frustrating experiences with the small desks found in Landrum Academic Center and Founder's Hall with The Northerner.

As she sat down in a dark and outdated classroom to stuff resource bags for the homeless, she quickly realized something peculiar about her desk in the Landrum Academic Center.

Senior sociology major Tara Pennington recognized that the desk she was sitting in was much too small to seat her.

Last year Pennington had most of her classes in Griffin Hall– as a computer information technology major she never had an issue with the size of her desk. “Up until that point I had never been in a classroom with these smaller desks,” she said.

Her experience at NKU, however, soon took a turn for the worse as she switched her major to sociology and subsequently had a majority of her classes in Landrum Academic Center and Founder’s Hall−the home of the majority of the “inaccessible” desks on campus.

And while she still says she loves NKU, she now always “dreads” those first few weeks back on campus.

Pennington said she already feels a little more anxiety in classes as a non-traditional student–add in the additional stressor of raising her 10-year-old son and it’s even more difficult.

Then, throw in not having a place to sit comfortably in class, and it’s completely nerve-wracking.

“I’m scared… I’ll have to face embarrassment over it,” she said. “It’s hard enough being a non-traditional student, but having to go through this just to sit down is very stressful.”

And to make it worse, Pennington said she isn’t alone in facing this issue.

“I got to talking…  and I found out it was affecting a lot of other people too. One girl was pregnant and didn’t say anything about needing a bigger desk–even though she said she was in a lot of pain,” Pennington explained. “One of my other friends can’t see the top of her desk because the tops are so little and she has very large breasts.”

Pennington claims the issue is so well-known that you can walk in almost any classroom in Landrum or Founder’s Hall and get a slew of commentary about the small size of the desks.

“I never really realized it was this big of an issue,” she said. “Students shouldn’t have to jump through hoops to have a comfortable learning experience like everyone else, and it’s obviously not just the overweight people.”

But to get the desk she needed in order to succeed academically, Pennington did what she had to do regardless of any added embarrassment.

Pennington sought out the help of NKU’s center for Disability Programs and Services and, after going through what she describes as a “pretty lengthy process,” was able to get an accessible desk put into all of her classrooms.

“It doesn’t affect my learning experience in class anymore, because disability services has been awesome,” she said. “But some of my friends who don’t go to Disability Services, and don’t say anything, are greatly affected. They don’t see themselves as having a disability.”

To get her accessible desk, Pennington went to Disability Programs and Services, talked to them about her issue, made and paid for a doctor’s appointment to get a note saying she was in fact technically “obese,” in order to then go back to the center to get proper documentation for her now registered “disability.” The center then quickly got an accessible desk put into her classrooms and contacted her professors to make sure she was able to have her accommodations met.

Part of this issue is a matter of when the buildings were built and the age of the equipment inside, according to Director of Disability Programs and Services Benjamin Anderson.

“There are newer regulations from 2010 (American with Disabilities Act regulations) for both buildings and equipment that the architects follow when filling rooms with furniture,” he said. “In the older buildings that weren’t under those new 2010 regulations, they may end up not having accessible desks.”

The center for Disability Programs and Services meets with students, who voice their concern, to see what their needs are and to make sure they make every accommodation necessary.

“If they want the desk as an accommodation, they would have to come here as a disability and provide with us some sort of documentation from an outside source that they do indeed have a disability,” Anderson said.

Then it’s up to the respective faculty member to make sure that accommodation happens.

Those who do not dare venture through the processes offered by Disability Programs and Services said this issue continues to be a deterrent to their educational experience.

Freshman anthropology major Emerson Durham said there is much more to this issue than students with “disabilities.”

“I think the ultimate issue is that these are not desks that accommodate all of the student body,” he said. “Going to Disability Services just makes you stand out even more and it’s uncomfortable. And I think too there are a lot of students who don’t even know that’s an option.”

However, there are always going to be certain things that fall through the cracks, according to Anderson. There are issues like this that occur and call for the immediate contact of the university architects to try and create a plan to get them taken care of, he said.

For now, Disability Programs and Services wants the students to feel as comfortable as possible and will work with them to try and get desks taken care of when possible.

“I know Tara [Pennington] went through Disability Services to get a larger desk,” Durham said.  “I know I could do the same, but I personally chose not to because I already feel like I stand out for being a larger student.”

Obesity as a disability

While she is very grateful for all of the help NKU has provided for her, Pennington finds herself asking why “everyday” students should have to go through this process to begin with.

“Why should they have to go to Disability Services for anything? They have enough problems as is, they don’t need to call anymore attention to their weight,” Pennington said.

But Anderson said obesity is legally considered a disability and therefore has to be dealt with like one within the university setting. U.S. Equal Employment Opportunity Commission (EEOC) now identifies obesity as a disability under the Americans with Disabilities Act Amendments Act (ADAAA). And over one-third (or 78.6 million) of U.S. adults are now obese, according to the U.S. Centers for Disease Control and Prevention, with the numbers growing larger everyday.

Obesity among Young adults in the U.s. | Create Infographics

Even so, Pennington said the logistics of this issue are simply unfair.

“No one should have to jump through all these hoops just because they’re fat,” she said. “I know enough people with real disabilities that I don’t think this sort of issue should necessarily have to be registered as a disability to get help, especially in 2014.”

Disability Services and Programs is compassionate to this sentiment and admits that there are times when they will work with students even if they don’t necessarily have “a disability” or have documentation to support it. “The priority would just go to those that do have ‘the disability’ and do have the documentation because legally we are required to provide that for those students,” Anderson said.

Pennington’s path through the predicament

Pennington was “more okay” with registering her obesity as a disability and going through the process to get a larger desk than others not only because she knew it was what she had to do to succeed, but because she knew the whole time that her obesity in particular was a side effect of an ulterior medical issue. In this case, it is a medical issue she says many people don’t understand just by looking at her.

“I was skinny for the majority of my life, so to suddenly be fat is awkward in itself,” she said. “I know hypothyroidism isn’t a visible illness, but the side effects are obvious. I exercise everyday, or at least 5 days a week. But I gained close to a hundred pounds in a matter of weeks.”

At this point in her academic pursuit–even after getting a new desk and feeling more comfortable in class–she is still left with people giving her “looks.”

“They give you those looks, like ‘oh you get the good desk,’” she said.

Or even worse, sometimes she will arrive to class to have her accessible desk taken by a fellow classmate who is unaware or has temporarily forgotten about her situation.

“It is really awkward. I have to go through the embarrassment of asking myself if someone is going to be sitting in my specific desk,” she said. “Will I have to tell them?”

Pennington never encountered this problem elsewhere. She came to NKU after receiving her associate degree from Gateway, where she said she never had a problem with the desks.

She says her favorite classrooms are the ones that have tables set up in rows with chairs you can pull up. She said those have always offered an inclusive learning environment, one accessible by all people.

Dreams of a more comfortable future

While new, uniformly accessible desks would be ideal to provide an inclusive learning environment, at this point Pennington would be pleased with just a few desks in each room where she could sit and learn comfortably.

“Just six in each classroom would make all the difference in the world,” she said.

Others facing the situation said this would be a good start, but they would like to see more.

“We pay to go to school, I think that there should be comfortable seating for everybody,” he said.

And those desks may just be possible in the future, according to Anderson. However,  the university architects have a priority list in terms of what accessibility needs are most pressing, he noted. So, they will be working in cooperation to see where that issue falls on the list of importance.

Where it falls will determine when the issue will be addressed and to what degree.

“My next move with that process will be to contact university architects to discuss what can be done about that to alleviate that problem in the future. I have no idea whether this will continue to increase,” Anderson said. “This semester looks pretty typical for us though.”

But to Durham and others, the priority of this issue is obvious and it really comes down to what the university is responsible for providing its students.

“It should be a basic to be comfortable while you are in a class,” Durham said.