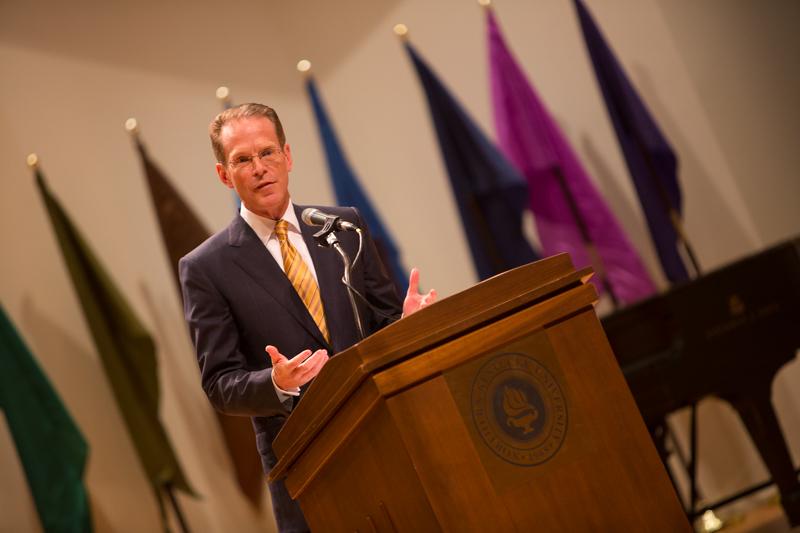 President Mearns and the other members of NKU’s Fuel the Flame campaign released tangible numbers stating target goals as well as how far the university has come towards reaching those goals and where it stands now. Topics included projected numbers for six-year graduation rates, an anticipated drop in graduates from Chase Law School and a projected increase in the number of minority faculty members.

In taking steps to reach this goal, Ott Rowlands said that NKU has been looking for grad students in places where they normally wouldn’t. Implementing something she called the future faculty program, NKU plans to look for potential faculty members from underrepresented groups.

“The plan itself is a way in which we’ve all agreed to increase the diversity of our faculty over the next five years,” Ott Rowlands said. “We have some strategies such as the future faculty program and establishing relationships with grad programs from [historical black colleges and universities].”

These numbers are based on full-time, first-time freshmen who begin class in the fall, according to Mearns.

Plans the university has implemented to help students include a program called ‘fifteen to finish,” which encourages to take over 15 credit hours per semester according to Sue Ott Rowlands, NKU’s provost. She said that there are also plans to track student performance to help struggling students.

Vice President of Student Affairs Peter Gitau said that NKU has begun using a program called Mapworks that allows faculty members to log student performance so that advisors have more direct access to aid those struggling.

“Last year was the first year where students, not just freshmen students, all undergraduate students were put into this database,” Gitau said.