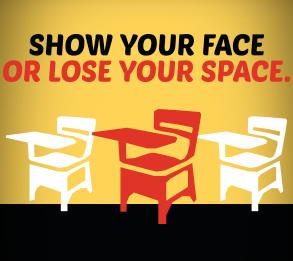 “Show your face or lose your space” is the message administrators are trying their hardest to convey to students as NKU establishes a new non-attendance policy next week.

According to university vice provost Pat Moynahan, the administration is following a complex communication plan in an effort to notify every student about the policy, which states that a student may be dropped from a course if they fail to attend the first class.

Moynahan said a variety of ways have been used to communicate with students in the last few weeks, including postcards, email, a notice on the NKU website and posters warning students about the new policy.

“We are doing our part on our end to make sure that the students get off to a good start and to understand that that’s important,” Moynahan said.

After seeing evidence that a “surprising number” of students skipped the first day of class during recent strategic planning processes, Moynahan said the decision was made to create a strict attendance policy.

According to Moynahan, the policy will help curtail students who sign up for 18 hours, for example, and end up only taking 15 because they planned to drop the class they like the least partway into the semester.

“But on the other side of that, one of the biggest complaints we get from students is that they can’t get into a class so a secondary reason for doing this is to open up seats for students who need to get into a class,” Moynahan said.

A third reason, he said, is to help students who assumed they’d be dropped from a course after not showing up for the entire semester. A small number of students are saddled with a financial burden each year when they fail to show to any of their classes due to a change in plans or financial hardship.

He said the system monitoring attendance will be updated every night and attendance in online classes will be measured by students logging in to the course.

“I think it’s a good thing, especially for the freshmen,” Dzhorgov said. “If you don’t go, you’re just

starting off the year slacking. I think it’s a fair system. With priority registration, those who do it are ruining it for others if they don’t show up.”

“My bet would be that it’s a lot of extra work for teachers. I feel like it’s the kind of situation where

money dictates the policy,” Maxx McKinley, a longtime NKU student pursuing a master’s degree in communication, said. “It could save money and catch a lot of fraud, especially for online.”

Moynahan said he’ll be watching the attendance numbers on a daily basis. “If for some reason you can’t attend; this isn’t designed to be arbitrary, please make contact with the instructor,” he said.

For more information on the new ‘Syllabus Day’ policy and first reactions from students on the new policy, check out our first story regarding the topic here.